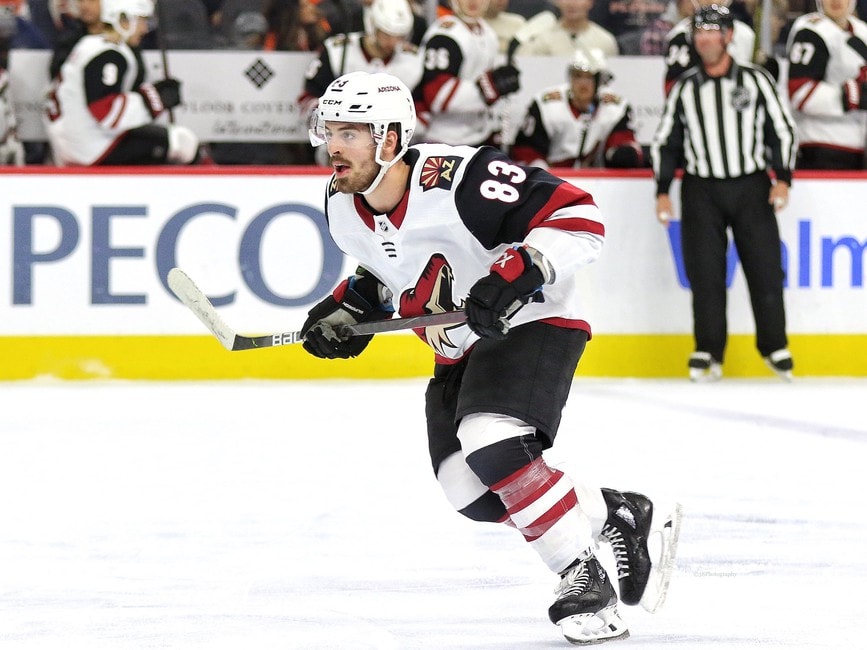 The Vancouver Canucks made a big splash this summer acquiring Oliver Ekman-Larsson and Conor Garland from the Arizona Coyotes. By now we all know who Ekman-Larsson is, but what about Garland? The 25-year-old forward was selected all the way down in the fifth round of the 2015 NHL Draft and is now part of a pretty successful class that includes Ethan Bear, Kirill Kaprizov, Dominik Simon, Christian Jaros, Troy Terry, and Adam Gaudette. He may be small at 5-foot-10, but he makes up for it with speed, creativity, and a pretty good wrist shot. He is also one of the hardest workers night in and night out.

Garland is expected to play on the second line with Bo Horvat and Nils Hoglander to start the 2021-22 season. After playing in relative obscurity with the Coyotes, he will be joining a team with a rabid and knowledgeable fanbase that analyzes every move a player makes. With the success he’s already had in the NHL, expectations will be high for him to provide the scoring punch the second line has lacked over the last few seasons. So, as we inch closer and closer to the start of training camp, let’s look at five interesting things about his life on and off the ice.

By the end of Garland’s career with the Wildcats, he was the franchise’s all-time leading scorer finishing with 328 points in 206 games. He hit that milestone in a 7-4 loss to the Halifax Mooseheads, a game where he scored his 39th goal. At the end of the season, he credited his linemates Manuel Wiederer and Cameron Askew who put up 29 and 32 goals respectively for helping him hit that mark.

I got to play with two great players and it was easy getting 89 assists with them.

In addition to his two CHL Top Scorer Awards and Jean Beliveau Trophies, Garland also won the Michel Briere Trophy as the QMJHL’s Most Valuable Player of the 2014-15 season. Won by the likes of Sidney Crosby, Alexis Lafreniere, and Mario Lemieux, he is still only the second American to win the award. The only other player from the United States to win it was Hall of Famer Pat LaFontaine back in 1983. That’s pretty good company if you ask me.

#2: Garland Was a Teammate of Zack MacEwen’s in Moncton

When Garland was ripping up the QMJHL during the 2015-16 season, Zack MacEwen had a front-row seat to the festivities. Before joining the Gatineau Olympiques in 2016, he was a teammate of his for 75 games. Finishing his Wildcats career with 11 goals and 42 points, he was able to experience some of what Garland will now bring to the Canucks.

Even though MacEwen probably won’t get to play on a line with his former teammate, he will still be a familiar face in the dressing room from Garland’s junior days. On a new team in a new city, that’s always good to have.

#3: Garland and Eichel Were the Jr. Bruins’ Dynamic Duo

In an offseason filled with the name Jack Eichel, it’s fitting that a new member of the Canucks has a connection to the Buffalo Sabres’ soon-to-be-former star. Before Eichel joined the USNTDP Juniors for the 2012-13 season, he was a teammate of Garland’s. Playing for the Boston Jr. Bruins in the Empire Junior Hockey League (EmJHL), they became one of their most productive duos.

I grew up down the street from Ryan Donato who plays on Minnesota and is one of my best friends. I also played with [Jack] Eichel a lot growing up. Having those guys around me for a majority of my life was huge. I wanted them to do well, but I also wanted to get drafted, with them being drafted. They got a college scholarship, I wanted to get a college scholarship. It was an advantage for all of us, and fortunately for all three of us, we made the NHL.

Conor Garland in an interview with The Hockey Writers

With Garland leading the team in scoring with 42 goals and 94 points in 40 games and Eichel leading them as captain with 39 goals and 86 points in 36 games, they both showed glimpses of greatness very early in their hockey journeys. Eichel went on to become a second-overall pick of the Sabres and Garland a 123rd overall pick of the Coyotes, so even though one was more highly touted than the other, they both ended up in the NHL in starring roles. Just another example of why draft positioning shouldn’t be the be-all and end-all when projecting an NHL career.

Garland loves dogs and will be adding another cuddly companion to the Canucks’ canine corps that now includes seven other members. He and his girlfriend Meghan have a now-seven-month-old Maltipoo puppy named Bubba who they adopted in Anaheim back in March of 2021. He also grew up with them his entire life and still has a family dog back home named Sunny, who is a three-year-old Golden Retriever.

He’s [Bubba] about three-and-a-half pounds…He’s a mama’s boy. He only likes me when I come home after games and he’s sleepy. He plays with Meghan all day.

Garland on the newest member of the family

The Canucks have quite the family of dogs right now. Here is a list of the current members with Garland’s adorable Bubba included.

Needless to say, the Canucks and their players love their dogs.

#5: Garland is One of Only 5 NHL Players From Scituate, Massachusetts

Scituate, Massachusetts is not really known for producing NHL players. Located in Plymouth County on the South Shore, midway between Boston and Plymouth, the town of 18,133 people (2010 census) has only churned out five players.

Garland Will Bring Scoring Depth to the Canucks

Garland might turn out to be one of the most important additions general manager Jim Benning made to the Canucks this offseason. He not only fits with the age group of the core right now with Horvat, Boeser, and Thatcher Demko, but he also brings significant scoring depth to the team too. He is a former 20-goal scorer and he hasn’t even entered his prime athletic years yet. On a line with Horvat and Hoglander, I expect him to score at least 20 goals and that’s on the low end of my expectations. If he establishes chemistry early with the duo, don’t be surprised to see him eclipse 25 goals or more by the end of the 2021-22 season.