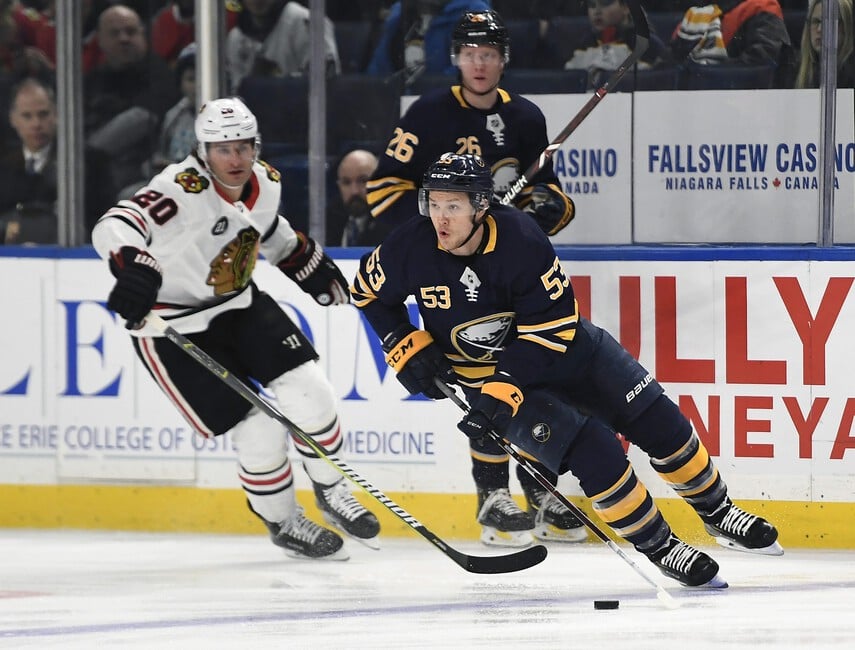 This is the third piece in a series of articles that will evaluate players competing for spots on the Buffalo Sabres opening night lineup. Each article will focus on a particular position. Disclaimer: A Jack Eichel trade could blow up this analysis at any moment.

Left-wing is much less crowded than other positions on the Buffalo Sabres to start the 2021-22 season, and a good pair of wingers can have a huge impact on an NHL team’s success. The role of a winger tends to be defined by who they are paired with. Typically, one winger will be relied on for scoring while the other will take up a “retrieval” role, disrupting the other team along the boards, breaking up plays, and dishing the puck to his linemates to create chances. Other times, depending on how the game is going, two scoring wingers can be loaded up on one line.

The latter situation could be the one the Sabres find themselves in often if games routinely start to get away from them, as most predict they will this season. Although, if you speak to the players themselves, they are much more optimistic about their chances. Regardless, some interesting and controversial names pop up on the left wing. One hefty contract casts a shadow and raises many questions as his production consistently dips, while another player will try to cast off the shadow of the Taylor Hall trade that brought him to town.

Five players could be considered the key names competing for a spot on the left side going into training camp. Still, it’s important to note (as I have in my other pieces) that if players in contention for a role at center fail to deliver the goods, some wingers who have experience down the middle could be called on to pick up the slack. That would require some rejigging to fill the gaps. Ultimately, individual performances in training camp will decide where things end up. Any analysis in this series should be taken as a representation of the situation heading into camp and background information on the players thought to be competing for spots. The proof remains in the pudding. So, let’s get into it.

I’ll start by honing in on three players auditioning for top-six roles along with the projected top two centers, Casey Mittelstadt and Dylan Cozens. Unlike Victor Olofsson, who will start on the right side of the first line barring an injury, no one on the left can be considered a shoo-in for that top spot. Amongst these three, two will likely share top-line duties to start the season as head coach Don Granato extends the competition for the first-line role into the regular season. The third player could find himself inserted into those first two lines as well, as the season progresses, ensuring robust competition for spots up and down the lineup. That’s the ideal situation, anyway.

Here are the three who will vie for the most minutes on the left-wing:

Next to Jack Eichel, no Sabres player is more controversial than Skinner. The fact that the Eichel situation has taken the spotlight off his large contract and lack of production has likely been welcomed by him. But when training camp begins later this month, the focus will return to Skinner, especially if Eichel is traded by then. A $9 million per season contract used to buy a lot of production. But in 2020-21, it got the Sabres nothing but a measly 14 points.

Skinner had a career-low 14:31 of ice time on average, but rather than that being a contributing factor to his low numbers, his limited usage was the result of what appeared to be a lack of interest/effort in playing the game from the 29-year-old. That’s also what led to a series of healthy scratches for Skinner near the middle of the season. He’s got six years left on his massive contract, which will force Granato to use him in some capacity. He has shown the talent in the past to play a top-six role, but that side of him resurfaces less often than the Loch Ness Monster these days.

Unless he debuts as a third-line center — a spot he will be given a chance to take over at training camp — Asplund will slot into one of the top-six left-wing spots. He played 28 games with the Sabres last season and put up seven goals and 11 points over that span. The 23-year-old has 57 games of NHL experience, and with a rebuilding Sabres roster, there’s no reason to expect he won’t be given full-time minutes this season. In 2020-21, he had two game-winning goals, averaged 12:51 of ice time, and had a ridiculous 20.6 shooting percentage that will regress to the mean. He won’t be high up in anyone’s fantasy hockey ratings but will be given every opportunity to grow. On July 30, the team signed him to a two-year $1.65 million contract.

Bjork did play a brief stint with Patrice Bergeron and Brad Marchand during the 2020 Playoffs in the Edmonton Bubble, filling in for the absent David Pastrnak. He began last season on the Bruins’ fourth line but quickly moved up to third-line minutes and then back to a spot on the first line as a nagging hip injury kept Pastrnak out of the lineup. He eventually settled into a role eating up third-line minutes until the April 11 trade to the Sabres. In 15 games with the team last season, he put up six points, scoring at a much better rate than his five points in 30 games with the Bruins. All signs point to Bjork getting a long look for the top spot on the left-wing.

Arttu Ruosalainen could end up in just about any forward position after camp, depending on how things go. I’ve had him placed on the right-wing before, but he could play center as he did in Finland. He could also end up on the left-wing. One thing is for certain, he will get a chance for a full-time gig like many other young Sabres.

Given that I project the three players mentioned to take up the 1-3 spots on the left-wing, the bottom-six battle really comes down to who will play on the fourth line. If Granato repeats the punishing practice of putting Skinner in the checking role (which, I don’t expect he will), one of these two players mentioned below might end up higher in the lineup.

After suffering a hamstring injury during training camp last season – that doctors successfully repaired through surgery – the “Latvian Locomotive” sat out the whole season and will be poised to make an impact this year. Because of that, I give him the inside track to take on fourth-line duties. He brings an element to his game that the Sabres missed dearly in 2020-21. His penalty-killing prowess and his energy-inducing heavy hits will be welcomed back with open arms, and he could even be given a chance at center on the fourth unit.

Murray appeared in two games with the Sabres last season and has a chance to make the team out of training camp. In 2020-21 playing with the Rochester Americans, he put up 19 points in 23 games. As a spare, the 23-year-old projects to be one of the players who will push for a roster spot. If he doesn’t get one, he will be high on the list of call-ups from Rochester.

A player’s performance at training camp will always be the deciding factor in placing them up and down the lineup. The five players listed here are the most likely candidates for left-wing positions at the beginning of camp. Still, changes are guaranteed as the murky picture of the Sabres’ lineup becomes clearer throughout camp and into the season. That process doesn’t begin and end in September or October. With a rebuilding roster, the coach’s eye is always on the future, and he will test things out throughout the season to see what might stick down the road.

Mike Carter is a freelance writer and contributor for the Buffalo Sabres with The Hockey Writers and NHLTradeRumors.Me He is @mikecarterlives on Twitter. Mike has been writing professionally since 2012, with stints as a reporter in northern British Columbia and Edmonton, Alberta. He now calls Salmon Arm, B.C. home.