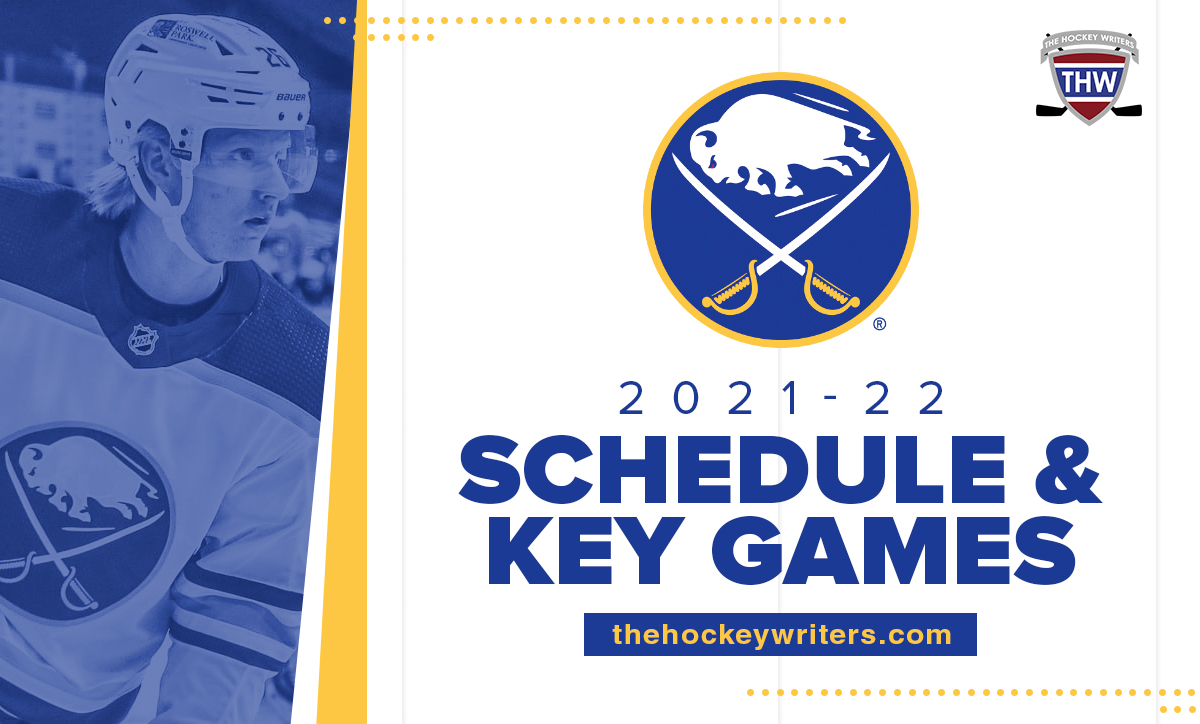 The Buffalo Sabres, like most seasons of late, have a tough schedule. It has nothing to do with clusters of top-notch opponents in key stretches or the Atlantic Division being loaded; it has to do with the team continuing their rebuild. There are still some key dates to mark on the calendar. In fact, every game for every franchise is something to look forward to because players and fans expect a full season for the first time since 2018-19.

Sabres Have Difficult Road Ahead in Loaded Atlantic Division

The last time Buffalo had a sur-.500 campaign was 2012-13, two years removed from its last playoff appearance. From 2013-2018, Sabres fans were aware their season was over early, and the team posted an average win percentage of .468. However, in 2018-19, there was hope. Buffalo won 17 of its first 25 games, featuring a 10-game win streak. Then they lost all but two games in March. In 2019-20, the squad showed promise out of the gate, and even though their hot start simmered, they almost reached the .500 mark by season’s end. Then 2020-21 featured an 18-game losing streak and things were back to a frustrating normal.

The great thing about a fresh season is that there’s always hope when every team has the same record. Outlandish improbable outcomes are always a possibility, but the Sabres should concentrate on progressing, and after last season, it shouldn’t be difficult. Yes, it shouldn’t, but the aforementioned outlandish improbable outcomes can go in both directions. 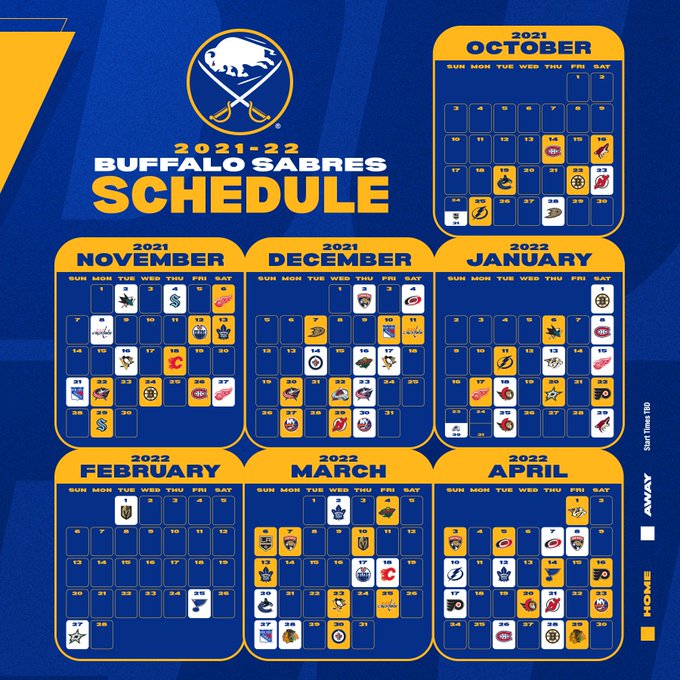 The divisions are back to normal and apparently unsponsored, so the standardized spacing of familiar foes will be welcomed. It will be nice that every game isn’t a rivalry game. The Atlantic Division will be tough, especially considering it contains both Stanley Cup finalists from 2021. The NHL will break from Feb. 3-22 to allow players to represent their countries in the Winter Olympics.

Even though February is strange and the division is brutal, there are plenty of important games to note for Sabres fans.

Nothing beats a home and season opener against a rival that was in the Stanley Cup Final the previous season. Montreal had a magical run, and it’s a tough draw for Buffalo right from the start. Or is it? The Canadians may have taken advantage of the altered playoff bracket, not having to face a non-Canadian team until the semifinal, and have a lot to prove this season.

Buffalo welcomes another storied rival to KeyBank Center early. The Sabres were 1-6-1 against the Bruins last season. They had plenty of games against Taylor Hall after the trade, so that’s a storyline that has since lost its luster.

Linus Ullmark is the new Taylor Hall. The goalie joined the Bruins in free agency during the summer, and this will be his first trip back to Buffalo.

The reigning champions visit Buffalo on their official tour de two-peat. The Sabres avoided any matchups with the Tampa Bay Lightning last season, but this will be the first of three in 2021-22. Unfortunately, and this is an assumption, the Lightning will be motivated to prove that the last two years don’t deserve an asterisk next to their titles. There shouldn’t be one, but the rest of the league should expect the same old fiery Tampa Bay.

This isn’t an attempt to form some strange opposite-end-of-the-country rivalry between the two teams that finished with the fewest points in the league last season. This matchup simply marks an early four-game west coast swing for the Sabres.

The end of said four-game swing ends in Seattle. This will be the first game between the franchises, and the Sabres will get to shake hands with their old friend Will Borgen. The defenseman was selected by the Kraken during the NHL Expansion Draft in July.

If Seattle mimics what the Vegas Golden Knights accomplished in their inaugural season, then it’s going to be a tough matchup.

This matchup is pending. If Jack Eichel is traded at some point beforehand, then disregard. If not, fans get to watch the top-two picks from the 2015 NHL Draft compete against one another for the 11th time.

Also, McDavid has been held scoreless in five of the head-to-head matchups, while Eichel has not recorded a point, just twice.

The Toronto Maple Leafs make their first appearance against Buffalo for 2021-22. The teams didn’t see each other last season, but the cross-border rivals renew their bitter history, which no matter the outcome, is a nice sight. The Maple Leafs currently have the fourth-best odds to win the Stanley Cup at +1200.

This signifies the first intrastate matchup. The Sabres and the New York Rangers met eight times last season, with the city boys posting a 4-2-2 record against the westerners. Bragging rights are up for grabs.

Buffalo fans get to see the Kraken’s sweaters up close for the first time. There also could be a stretch of new rivalry here. First, both teams could be below-average, which, in turn, gives them the possibility to be good at the same time. Also, these teams are the northern-most United States NHL cities on their respective coasts. Yes, Buffalo isn’t on the Atlantic coast specifically, but the state of New York is. 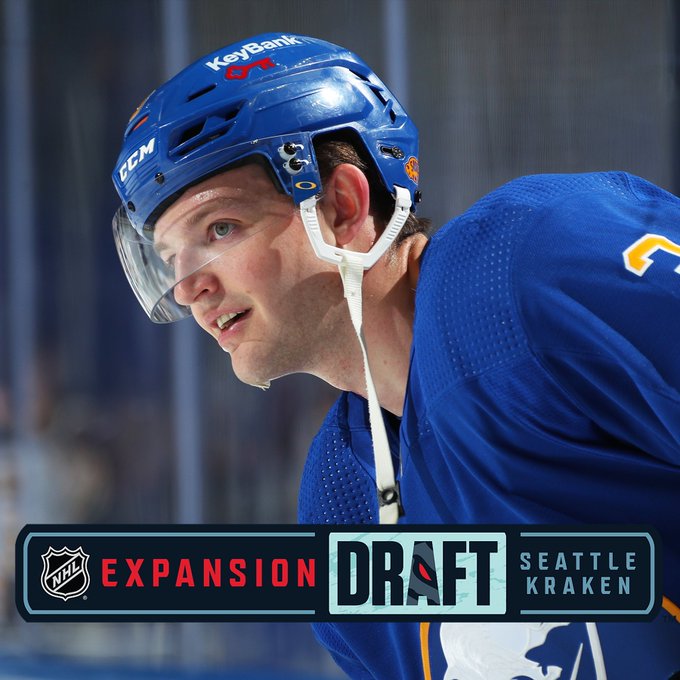 Also, though the team has already played against him, a warm welcome should be in store for Borgen from the fans. It’s tough for any franchise to lose a player in an expansion draft.

Sam Reinhart was traded to the Florida Panthers on July 24. In return, the Sabres received goalie Devon Levi and a 2022 conditional first-round pick. This will be the first time Reinhart faces off against his old squad.

As stated, the Maple Leafs hold the fourth-best odds to win the Cup. The favorites are the star-studded Colorado Avalanche. Sabres fans welcome Nathan MacKinnon et al to KeyBank center for what should be an entertaining display of hockey.

Buffalo gets their first shot against the other city boys. The Sabres were 2-6-0 against the Islanders last season, and New York is primed for another good year. Anything can happen when in-state rivals get together, however.

The start of 2022 will hopefully have a joyous feel after the last two pandemic-riddled years. The Sabres will ring in the fresh start with a New Year’s Day match against the Bruins. As most fans sit at home, possibly recovering from the previous night’s festivities, the ratings should be high for this rivalry game.

It took almost half the season, but Buffalo meets Philadelphia for the first time. The Sabres were 3-3-2 against the Flyers last season. It will also be the first time playing against Rasmus Ristolainen, who was traded to the Flyers on July 23.

The defenseman spent eight seasons in Buffalo. In 542 games, he recorded 245 points with a shocking minus-163 career rating. The trade wasn’t met with a great response from Philly fans, but what is?

Even though the season will likely be difficult, this will by far be the toughest stretch. Buffalo’s seven-game road trip features three games against three of the top four Stanley Cup favorites in Colorado, Vegas and Toronto. Yippee.

Mark this date down for relief. The road trip ends, and a five-game homestand begins. Unfortunately, Minnesota is no slouch, and Florida, Vegas and Toronto come to town one after another. It was nice to take a breath, at least.

Speaking of that matchup with the Panthers, Reinhart will make his first appearance back in Buffalo. On the ice, that is. He could make a personal visit at some time, we just don’t know, and it would be weird if we did.

In his seven seasons as a Sabre, the center recorded 295 points. The crowd will likely give him a hand, and depending on how bad the goalie situation has been up to this point, maybe Levi makes his debut in net against his former franchise. Highly unlikely, but we can dream for a more dramatic narrative.

Buffalo plays Chicago in the last game of the season which barring that outlandish improbable outcome we spoke about, will also signify the beginning of their offseason. This concludes this chapter of the rebuild.

Yes, a haul for Eichel would be nice, but that just sets the Sabres back even longer. It’s a good season for Buffalo to see what they have in the prospect pool and get the youth some experience, and perhaps the prospects can help the Sabres play spoiler down other teams’ stretches. This has gone on long enough, but for now, supporters should accept the inevitable and have some fun in the process.

Carl Knauf is an author and master journalist (so the degree says). He specializes in sports–primarily hockey–music, and the publishing industry. His sports writing has been featured on The Hockey Writers, Last Word On Sports, and local newspapers in his home state of New Mexico. Carl covers the Washington Capitals with accurate reporting and detailed analysis to help readers answer basic and burning questions such as, “Why did the Capitals not win the Stanley Cup (again)?” and, “What to expect from the Capitals this season (except another Stanley Cup…again)?”

Carl greatly enjoys interacting with his audience (except trolls who he refuses to embarrass with a response). Please use the comment section at the bottom of every THW article, and also feel free to chat with and follow him on Twitter and Facebook. For interview and feature requests, please visit his Muck Rack profile.