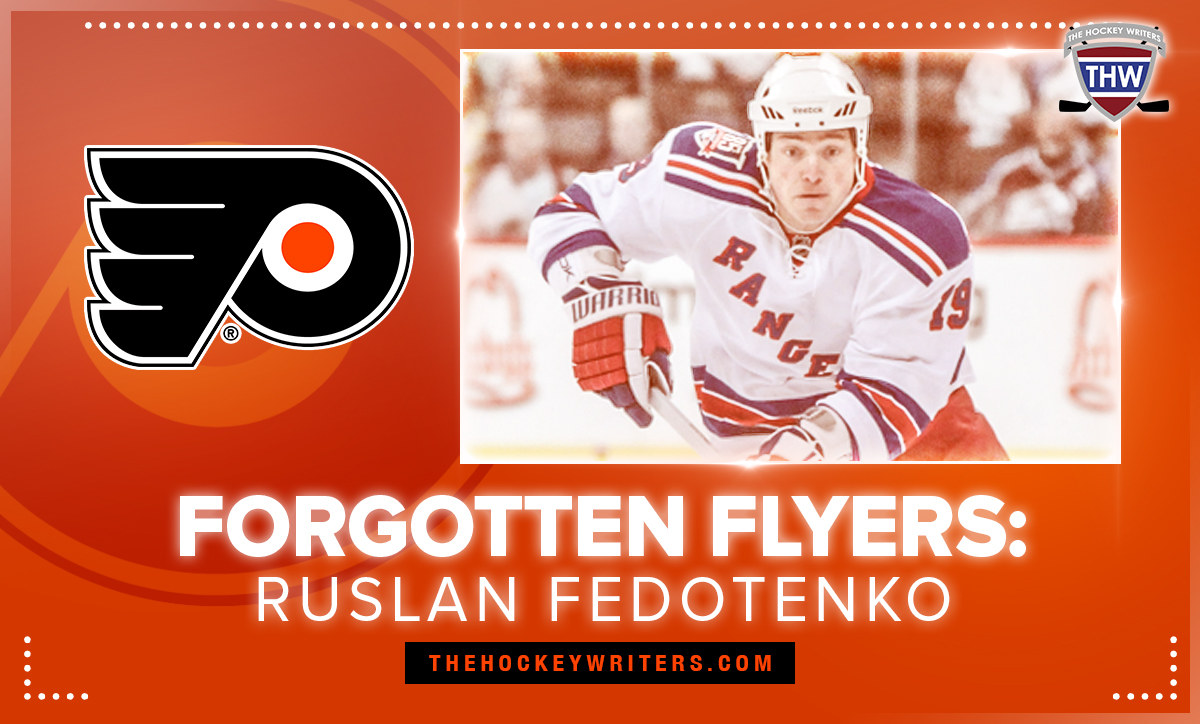 When we look back on the contributions of Ukrainian forward Ruslan Fedotenko, his time with the Tampa Bay Lightning and Pittsburgh Penguins are likely the first things that come to mind. Before he donned those sweaters and those of the New York Islanders and New York Rangers, the 12-season veteran began his NHL journey with the Philadelphia Flyers. While he was only with the organization for a brief time, the Flyers gave him his first opportunity and sparked a memorable NHL career.

Fedotenko was signed by the Flyers as an undrafted free agent in 1999. He was coming off his only campaign in the United States Hockey League (USHL) with the Sioux City Musketeers, where he posted 43 goals and 34 assists in 55 games. In 1999-2000, Fedotenko spent time developing his play between the American Hockey League (AHL) on the then-Philadelphia Phantoms and in the ECHL with the Trenton Titans. He finally made the jump to the NHL in 2000-01 when he spent most of the season with the Flyers while also appearing in eight AHL contests with the Phantoms. He chalked up 16 goals and 20 assists in 74 NHL games on a very talented Flyers team that included Hockey Hall of Fame winger Mark Recchi, Simon Gagne, and Keith Primeau.

That season, Fedotenko also received his first playoff game experience with an assist in six matchups against the Buffalo Sabres. The Sabres eventually defeated the Flyers with a 4-2 series victory in the quarterfinals.

Fedotenko followed up his first NHL season with 17 goals and nine assists in 78 regular-season games in his sophomore campaign. The Flyers made it back to the postseason but again lost in the first round, this time in five games. Fedotenko produced his first career playoff goal versus the Ottawa Senators, but it was the last time the Philly faithful would see him in orange and black for a while.

After only two seasons with the Flyers, Fedotenko and the team’s 2002 first-round pick was traded to the Lightning for the Bolts’ 2002 first-round selection, which happened to be fourth overall. The Flyers selected defenseman Joni Pitkanen with that pick.

Fedotenko had some of his best seasons in Tampa Bay. He was one of the many offensive weapons in their arsenal at the time, along with Martin St. Louis, Vincent Lecavalier, Cory Stillman, Brad Richards, and Freddy Modin. The team was loaded at every position, with defensemen such as Dan Boyle and Pavel Kubina running the show on the blue line and Nikolai Khabibulin between the pipes. The Bolts won the Southeast Division in 2002-03.

One of the best moments in Fedotenko’s career came during the 2003-04 season. He scored 39 points in 77 contests (17 goals and 22 assists) during the regular season, which ranked seventh on the team behind St. Louis (94 points), Stillman (80 points), Richards (79), Lecavalier (66), Modin (57), and was tied with Dave Andreychuk (39). In the postseason, they defeated the Islanders, Montreal Canadiens, and the Flyers to make it to the Stanley Cup Final, where they took on the Calgary Flames.

The teams were evenly matched and split the first six matchups. St. Louis forced Game 7 with his second-overtime tally in Game 6 that beat Calgary goalie Miikka Kiprusoff for a 3-2 win. Game 7 was the most important game of Fedotenko’s career. He opened the scoring and then followed that up with another goal to give the Lightning a 2-0 lead. The Flames cut the lead in half thanks to forward Craig Conroy, but they couldn’t tie the game. The Lightning won Game 7 2-1 for the franchise’s first Stanley Cup victory. Fedotenko notched 12 goals and two assists in 22 games during that run.

Fedotenko remained with the Lightning for two more seasons and continued to be a stellar complimentary asset on offense. The chemistry he had with his teammates was impressive, despite the talent around him, and he managed to hold his own and fit in. He put up the following regular-season stats during his Tampa Bay stint:

He left the Bolts as a free agent after the 2006-07 season and inked a one-year deal with the Islanders. He was only there for the following season and again left as a free agent. With the Isles, he scored 33 points in 67 matches (16 goals and 17 assists).

Fedotenko started the 2008-09 season with the Penguins, who were coming off a Stanley Cup Final appearance against the Detroit Red Wings (where they lost the series 4-2). He joined a stacked lineup that included Sidney Crosby, Evgeni Malkin, Bill Guerin, Chris Kunitz, and Sergei Gonchar. Fedotenko still managed to provide offense. In the regular season, he was fifth on the team in scoring with 39 points (16 goals and 23 assists). Only Malkin (113 points), Crosby (103), Jordan Staal (49), and Petr Sykora (46) had more.

The Penguins powered their way to a second consecutive Stanley Cup Final appearance in 2009, and, as in 2008, the Red Wings were waiting on the other side, this time as defending champs. Pittsburgh battled hard and pulled off a Game 7 win thanks to a two-goal performance by forward Maxime Talbot. Fedotenko won his second career Cup, and Pittsburgh clinched it for the first time since 1991-92 during the days of Mario Lemieux and Jaromir Jagr.

Fedotenko finished the 2009 championship run tied with Gonchar and Kunitz with 14 points (seven goals and seven assists). Malkin (36 points), Crosby (31), and Guerin (15) were the only players with more.

He stayed in Pittsburgh for another campaign, where he posted 11 goals and 19 assists in 80 regular-season contests. However, Fedotenko only skated in six playoff games in 2010, when the Penguins were eliminated in the semifinals by the Canadiens in seven games. That marked the end of his Pittsburgh tenure.

Other Stops & Return to Philly

After the 2009-10 season, Fedotenko and the Penguins went their separate ways, and he was a free agent once again. This time, he signed a tryout with the Rangers and signed a contract for the 2010-11 season. He was a nice complementary asset for the two seasons he was there, joining a roster that included Brandon Dubinsky, Marian Gaborik, Derek Stepan, and reuniting with Brad Richards from their days in Tampa when he joined the fold in 2011-12.

Fedotenko compiled these regular-season stats as a Blueshirt:

Both seasons Fedotenko was with the Rangers, the club made the playoffs. In 2010-11, he scored two assists in five postseason matchups, while in 2011-12 he tallied seven points (two goals and five assists) in 20 games.

The lockout-shortened 2012-13 season was Fedotenko’s last in the NHL. Everything came full circle when he signed with the team that gave him his first opportunity. He signed a one-year deal to return to the City of Brotherly Love.

As the lockout continued into the late stages of 2012, postponing the NHL season, Fedotenko did as many others did and went overseas to suit up in the Kontinental Hockey League (KHL), where he played for HC Donetsk. In 33 KHL games, he scored eight goals and 10 assists.

When the lockout ended, he joined Philadelphia as a decent contributor. He played 47 games but only notched four goals and nine assists as the club failed to make the playoffs that season.

Enjoying his time with Donetsk during the lockout, Fedotenko re-signed with them before the 2013-14 KHL campaign when he produced 17 points in 46 games (7 goals and 10 assists) in the regular season and managed six assists in 13 playoff games. He played his last professional hockey in the AHL in 2014-15 and 2015-16 for the Minnesota Wild’s affiliate, Iowa Wild. In 29 games over that two-season span, he scored three goals and four assists.

Fedotenko announced his retirement in late 2016 and hung up his skates after 863 regular-season NHL contests. During his career, he scored 173 goals and 193 assists and appeared in 108 playoff games with 22 goals and 18 assists.

He will be remembered as the hero who clinched the Cup for the Lightning with his two-goal performance in 2004 and the role he played in helping bring the Cup back to Pittsburgh in 2009. However, the Flyers saw his potential and gave him that chance to grow and develop into the dynamic talent he became. Without that opportunity, maybe he wouldn’t have made it to the NHL. Fedotenko might not be remembered as a Flyer as much as when he was with other franchises, but the organization was pivotal in his career becoming what it was.

I have been a hockey fan for most of my life, and have played the game myself for more than six years. I graduated from the State University of New York at Oswego in 2018, with a bachelor’s in Broadcasting & Mass Communication. Previous positions held include being a Sports Analyst for Oswego’s student-run TV station, WTOP-10; News/Sports Intern for WIVB-TV Channel 4; and Sports Beat Writer Intern for Pro Player Insiders.