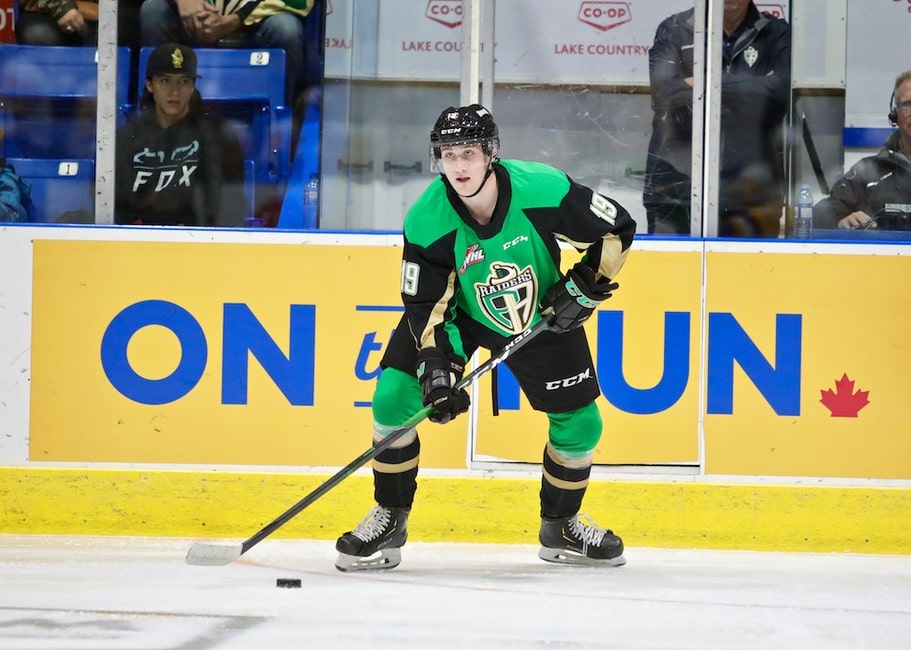 The 2021 San Jose Sharks’ prospect scrimmage featured some outstanding moments. From sensational shootout goals, a Gordie Howe hat trick, and score sheets featuring the future of the club, development camp and the ensuing scrimmage allowed a taste of the promising future of the club.

Hopefully that optimism will continue, as the team’s top prospects, excluding college athletes like Thomas Bordeleau and Alex Young, will compete in the “Rookie Faceoff” beginning on Sept. 17. Over four days, the Sharks’ youngsters will battle the best prospects of the Anaheim Ducks, Vegas Golden Knights, and Colorado Avalanche.

All eyes will be on William Eklund entering these matches, as this extra rookie training camp and game time will serve as a tune-up before his attempt to make the NHL roster out of training camp. Seeing the Swede face opposing top prospects on North American ice will greatly indicate his status as a possible NHLer. Recent first-round picks for the Sharks such as Ozzy Wiesblatt and Ryan Merkley will also feature at the showcase.

However, they will not be the only attractions entering these prospect games and precursor to Sharks training camp. With the Sharks’ preseason beginning in less than two weeks, this next week could show much of the organization’s near and distant future.

Making the jump to the top level of North American hockey is not an easy feat, and determining when a prospect is ready for that opportunity can be incredibly difficult. Rushing a player into the league could see the player lose confidence and never reach their full potential. On the flip side, limiting a player’s games or minutes played could see their growth come about too slowly.

With that said, there are a few players, besides Eklund, that appear possibly ready for NHL games.

Per The Athletic’s Kevin Kurz, the Swedish forward will play this tournament on the left wing of the top line. While the club believes Eklund will eventually transition back to center, he will not yet be given that responsibility and will continue on the wing as he did at rookie camp.

After scoring over a half-point per game in the Swedish Hockey League (SHL) as an 18-year-old, Eklund alerted media prior to the 2021 NHL Draft that he planned on a return to his home club, Djurgardens IF. However, the Sharks mentioned his status as their second-best player in the draft class and noted his NHL readiness upon selecting him seventh overall.

His willingness to even play with the San Jose Barracuda makes Eklund particularly fascinating to watch for an NHL spot. In order to be effective and receive a fair chance to succeed alongside adept teammates, I would recommend the Sharks play him in the team’s top-six or give him first-line minutes in the SHL or AHL.

At the exhibition, the team’s top prospect will have to play head and shoulders above the competition to appear NHL-ready.

The biggest riser from the recent rookie camp surely is Jasper Weatherby. He greatly impressed and will forgo his senior year at the University of North Dakota to opt for professional hockey. He also finished his final college season with an impressive run of 11 goals in his final 12 games.

The 23-year-old is more noted for his defensive game and size. At 6-foot-4 and 222 pounds, the center could add size to a current NHL roster that lacks it in their bottom-six. Weatherby’s junior season saw him score 14 goals and 24 points in 29 games while holding a 57 percent win rate in the faceoff dot.

The excitement around Weatherby will result in his status as the top-line center in the Rookie Faceoff. Slotting between Eklund and Wiesblatt, the 2018 fourth-round pick will slot alongside two recent first-round picks.

Weatherby will feature in the fourth-line center battle between Lane Pederson and the incumbent Dylan Gambrell at training camp. He must use his quality linemates and great opportunity to impress coaches at the Rookie Faceoff.

In that debut season, the youngster saw his production fall from the over point-per-game status he previously held in the Ontario Hockey League (OHL). With just a goal and 11 assists in 31 games, his season fell below many’s expectations.

The Sharks have just four right-handed blueliners under contract in Erik Karlsson, Brent Burns, Nicolas Meloche, and Merkley. If the team opts to keep three righties in its NHL lineup, there’s a chance Merkley could make it. Likely, the youngster needs to beat out Radim Simek, playing on his off-hand, at some point this season to warrant an NHL opportunity.

Merkley must exhibit dominance against opposing prospects to reassert himself as a top prospect.

Since 2018, the organization has drafted six blueliners: Merkley, Artemi Kniazev, Santeri Hatakka, Gannon Laroque, Artem Guryev, and Yevgeni Kashnikov. The latter two will not feature in the upcoming games, but the former four feature a great split of offensive and defensive talent and righty vs. lefty duos. This sets up San Jose’s top four defenseman prospects to not only be on the same roster, but likely play together and set one another up for success.

The first presumptive pairing would be Hatakka alongside Merkley. As mentioned, Merkley’s stock as a top prospect within the San Jose system has fallen significantly. Perhaps with a more dynamic defense partner and first unit power play time, he will be more effective in these scrimmages.

Hatakka’s stock is on the rise, however. After completing a second season in the SM-Liiga, Finland’s top professional league, the 20-year-old will soon transition to North American professional hockey.

The Finnish blueliner’s game is defined by smooth skating and mobility, allowing him to defend effectively and occasionally quarterback a rush offensively. Paired together, I expect Hatakka to complement Merkley’s offensive game while still helping defensively.

Then, the “second pairing” would then feature Kniazev and Laroque. Kniazev’s stock has been soaring, as the Russian blueliner completed his final season in the Quebec Major Junior Hockey League (QMJHL) with the Chicoutimi Sagueneens at over a point-per-game pace.

The 2019 second-round selection potted five goals and 18 points in 14 games last season. Kniazev’s mobility and vision make him an offensive threat, but not a slouch defensively. Next to a large-bodied and defensive-oriented partner, the Russian should have great success.

Laroque, the Sharks’ 2021 fourth-round selection, is also classified by his smooth skating, but his 6-foot-2, 200-pound stature grant the team a different flavor of blueliner. In fact, Wilson Jr. had never selected a defenseman over 6-feet tall until 2021.

On an abysmal Victoria Royals team that won just three of 22 Western Hockey League games in 2020-21, he led the team’s defensemen with seven points in 21 games. His pairing with Kniazev would feature high-paced offense and defensive reliability from the great mobility of these blueliners.

These games will also feature the only two goalies drafted to San Jose since Wilson Jr. took over scouting. Both will be returning to their Canadian junior leagues upon dismissal from training camp, but will hope to impress and gain traction heading into next year. With Alexei Melnichuk slotting as the other notable goalie prospect, both Zachary Emond and Benjamin Gaudreau can hope to gain hype as the potential future of Sharks netminding.

However, 2020-21 was less spectacular for the now 20-year-old. On both the Huskies and Saint John Sea Dogs, the netminder’s SV% fell below .890, including a .863 SV% and 7-5 record with the Sea Dogs in the regular season. In likely his final junior season in 2021-22, the netminder must impress, and hopefully he can make an impression this weekend.

In the 2021 third round, San Jose opted for an OHL netminder who greatly impressed at the Under-18 World Junior Championships. That tournament saw Gaudreau sport a .919 SV% en route to winning a gold medal with the Canadian team.

In 2019-20, his D-1 season, he sported a .890 SV% in 27 games for a subpar Sarnia Sting team. As the expected starter for his OHL club, and an 81st overall pick, I would expect Gaudreau to play most of the games unless the team already has opted to evenly split time between the goalies.

Other Sharks Players to Watch

Daniil Gushchin, after lighting up the United States Hockey League (USHL) the last two seasons, now has a unique opportunity to possibly slot into the AHL. Due to the pandemic, the Russian winger opted to stay with the Muskegon Lumberjacks instead of transferring to the OHL like he originally intended.

Now, after his stellar season totaling 32 goals and 64 points in 46 games, Gushchin could move to the Barracuda instead of a junior league. Should he greatly show off this next week, that goal could seem more like a reality.

Brandon Coe, who played solely in the AHL due to the OHL never returning, will also be worth monitoring. His draft year saw him pot 25 goals and 57 points in 60 games. His AHL numbers were impressive for a player not expected to play professionally, with a goal and five points in 17 games. At 6-foot-4, his game should be quite effective against opposing junior players at the upcoming showcase.

Lastly, I’ll mention Ethan Cardwell, a 2021 over-aged fourth-round selection, as an interesting storyline to monitor. In 2019-20, his draft year, he scored at a point-per-game rate upon being traded to the Barrie Colts. With the OHL not playing, he took on the third division of Swedish professional hockey and lit up the league with nine goals 27 points in 18 games. He now has professional hockey experience and should be looking to have a big showing at the exhibition.

Who are you most excited to see at the 2021 Rookie Faceoff? Let me know in the comments!

Josh Frojelin is a young writer from the Bay Area. Josh grew up as a Sharks fan, being introduced to hockey by his father. He is now attached to his phone, waiting to hear the latest in hockey news. In addition to writing, Josh loves theatre, and his corgi Rocky.