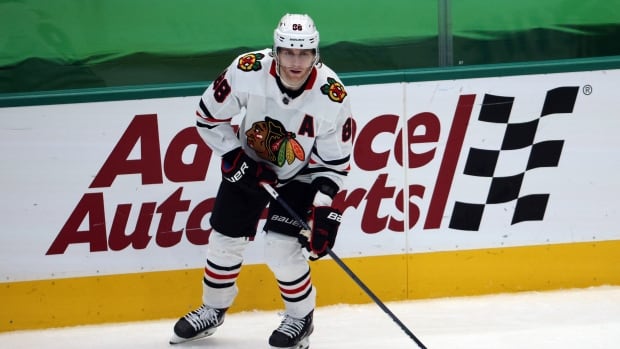 Chicago star Patrick Kane said Friday he has participated in the investigation into allegations that a then-assistant coach sexually assaulted two players in 2010, adding that he did not know anything happened at the time.

“Obviously very serious allegations, and everyone knows that,” Kane said at the annual NHL/NHLPA preseason player media tour. “But I will say that I didn’t know anything about it at the time and did participate with the investigation.”

Kane’s comments were his first since the allegations came to light. Chicago launched the investigation led by a former federal prosecutor and pledged to release the findings.

The three-time Stanley Cup champion said he also was unaware of homophobic bullying of one of his former teammates that ensued.

“Obviously disturbing,” Kane said. “You never want to hear that type of stuff. I feel for [someone making] those type of allegations. And hopefully it didn’t affect the player too much. But I’m sure when you’re hearing that type of stuff, obviously it could affect you deep down.”

NHL Deputy Commissioner Bill Daly told The Associated Press the Chicago investigation was proceeding but did not have a timeframe for when it would be completed. The team pledged to release the findings of the investigation, a decision the league supports.

“We probably would have supported the decision if it was different, if it was made for the right reasons,” Daly said. “Since these allegations arose, I think [Chicago] as an organization have handled everything in the right way and they’ve taken the proper steps. We’ll see at the end of the day what comes of it.”

Two lawsuits were filed against the team earlier this year. The first alleges sexual assault by trainer Bradley Aldrich during the team’s run to the 2010 Stanley Cup title, and the second was filed by a former student whom Aldrich was later convicted of assaulting in Michigan.

According to TSN, two Chicago players told then-skills coach Paul Vincent in May 2010 of inappropriate behaviour by Aldrich. Vincent said he asked mental skills coach James Gary to follow up with the players and management.

Vincent was called into a meeting with then-team President John McDonough, general manager Stan Bowman, hockey executive Al MacIsaac and Gary the next day. He said he asked the team to report the allegations to Chicago police, and the request was denied.

In an email to the AP earlier this summer, Vincent said he stands by everything he said to TSN.

Bowman and former coach Joel Quenneville, who’s now with Florida, have said they would cooperate with the investigation.