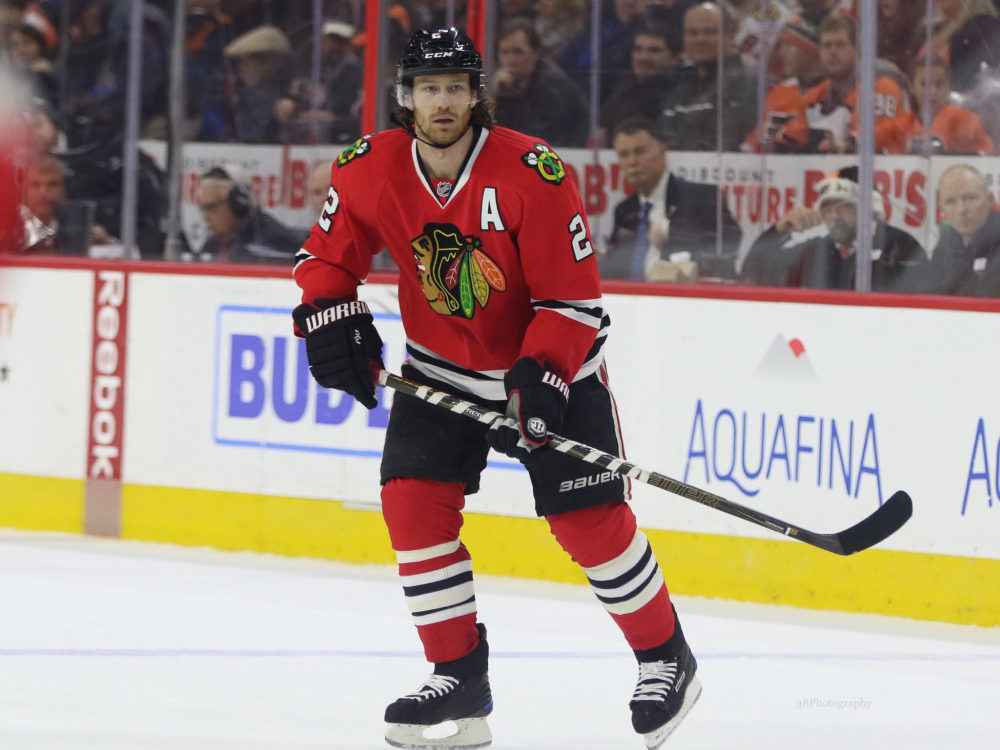 There is plenty of Edmonton Oilers-related news to share as general manager Ken Holland addressed the media prior to training camp getting underway on Wednesday. Included in the updates was the status of defenseman Duncan Keith, goaltender Alex Stalock and one player who has yet to be vaccinated.

Other Oilers also made comments heading into camp and there is some real excitement about how deep the roster is and the Oilers getting to play eight preseason games before getting the 2021-22 season underway.

Keith Quarantining After Getting Second Does of Vaccine

Tuesday evening, it was learned that Keith was not going to be at the start of training camp because he’d recently received his second dose of the vaccine and was quarantining before joining the roster. Holland noted that Keith will join the Oilers next Friday, isn’t concerned about him missing the start of camp, and says the defenseman should see plenty of ice time in the final preseason games before the regular season begins.

Holland called Keith’s choice to get vaccinated a difficult one but understood and supported the player. He’s happy that he’ll be with the roster this season for all of their games and noted that he won’t have any restrictions throughout the year.

The same cannot be said for one other Oilers’ player who has yet to be vaccinated. Holland wouldn’t name the player — and we won’t either without confirmation from the team — but there is plenty of talk on social media about who the player is based on previous tweets related to their thoughts on vaccination. Let’s put it this way, the potential that Colton Sceviour could make the team on a PTO has certainly improved.

Holland did not indicate why he wouldn’t release the player’s name when so many teams have been open about sharing those details with the media.

Holland did say that he estimates the player could miss 30 games, assuming he stays on the roster and travels to the United States for games. The player will be at camp and Holland said he has not made the decision to exclude the unvaccinated player at this time, specifically because he wants to give the player time to make a difficult and personal decision. He may change his stance on that in a week or two.

When asked about why the team would allow an unvaccinated player to join the team while Keith is sitting out and quarantining, Holland noted he didn’t make the rules set forth by the NHL and that they are just following guidelines. He did say that things will flip as Keith becomes available and gets into the season, the unvaccinated player will often not be available, which is a decision everyone will be forced to deal with but will complicate matters.

Holland did hint that if the Oilers were playing well, he’s certainly not expecting to disrupt team chemistry to get a player in the lineup who wasn’t.

Stalock Unlikely to Play This Season

Goaltender Alex Stalock is doubtful to see any games this year. Holland said, “He contracted COVID before the 56-game season and likely developed a heart condition during the time he was cleared and was part of the Oilers’ taxi squad. THe GM noted that the team conducted a physical with the player at the end of the year, Stalock went home and did additional tests and the diagnosis was discovered.

As per Frank Seravalli of Daily Faceoff:

“Not done yet, but sounds like #stlblues are working on an expanded role for former #Oilers GM Peter Chiarelli, who has served as an advisor to Doug Armstrong. Official title TBA but perhaps VP of Hockey Ops. Also, Ken Hitchcock to rejoin STL organization as coaching consultant.”

Hyman spoke with the media as well this week and noted that he already feels like he’s been a part of this organization for ages. He said, “I got here a couple weeks ago but it feels like I’ve been an Oiler for a while now… I knew Edmonton would be a perfect fit for me.”

Needless to say, Hyman is going to become a fan favorite in no time. If there is one player fans might be most excited to hear updates about, it could be Hyman. How he clicks with Connor McDavid will be a real storyline coming out of camp and preseason.

Broberg Will Get a Shot to Make the Team

When asked about young guys and prospects making the roster out of camp, Holland noted that there will be an opportunity for some players, even if the odds aren’t likely because the team is pretty deep this season. Holland said, “I don’t do it very often… the better the team is, the better the depth is, it makes it harder for young players… It’s going to be no different with Philip Broberg — he’ll have to steal someone’s job.”

Dylan Larkin was able to do so in Detroit and of the prospects the Oilers have, Broberg might be the most likely candidate. He’s played well in rookie camp and if healthy, it will be one of the first real times the Oilers will get to see what this player is capable of. There is a lot of hope he’s going to be a really strong option for the Oilers long-term, but his development has been somewhat hampered due to injuries and the pandemic.

Holland said, “If Philip Broberg can force his way onto the team great. If not, he’ll head down to the American League and we’ll get him ready.”

Flames, Mangiapane reach 3-year, $17.4M deal
Mason McTavish is hoping to lead the Canadian juniors to gold, despite the nine that got away
2022 NHL offseason: Grades on biggest deals, including Pacioretty, Tkachuk, Burns
3 Takeaways From Finland’s 6-1 Win vs. Latvia
Connor Bedard gets Canada started in tight win over Latvia at world junior tournament