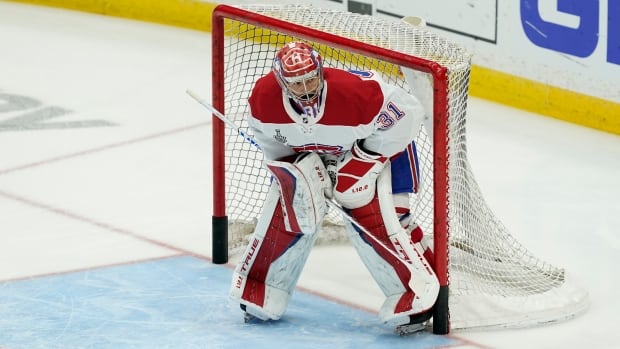 The Montreal Canadiens say star goaltender Carey Price is among five players who failed their physicals due to injury and will likely miss the remainder of training camp.

The Canadians said Thursday that Price is out with a knee injury.

The club also said defenceman Joel Edmundson is listed as day-to-day while right-winger Brendan Gallagher is absent for family reasons and is expected to report to camp later.

Canadians head coach Dominique Ducharme said Thursday he expects Price to be available when Montreal plays its season opener Oct. 13 at Toronto. He added Hoffman’s injury could keep him out for the start of the season.

Price is entering his 15th season with Montreal. The 2015 winner of the Hart, Vezina and Jennings awards was a significant factor in the Canadiens’ run to the Stanley Cup final last year, posting a 13-9 playoff record with a 2.28 goals-against average and .924 save percentage.

Price only played 22 regular-season games in the shortened 56-game 2020-21 campaign, however, missing time with a lower-body injury and a concussion.

The 33-year-old Price was made available to the Seattle Kraken in this year’s expansion draft after he waived his no-trade clause.

The Kraken decided to look elsewhere, likely due to Price’s hefty price tag and concerns about his health. The all-star netminder has five years left on his current contract with an average annual value of US$10.5 million.