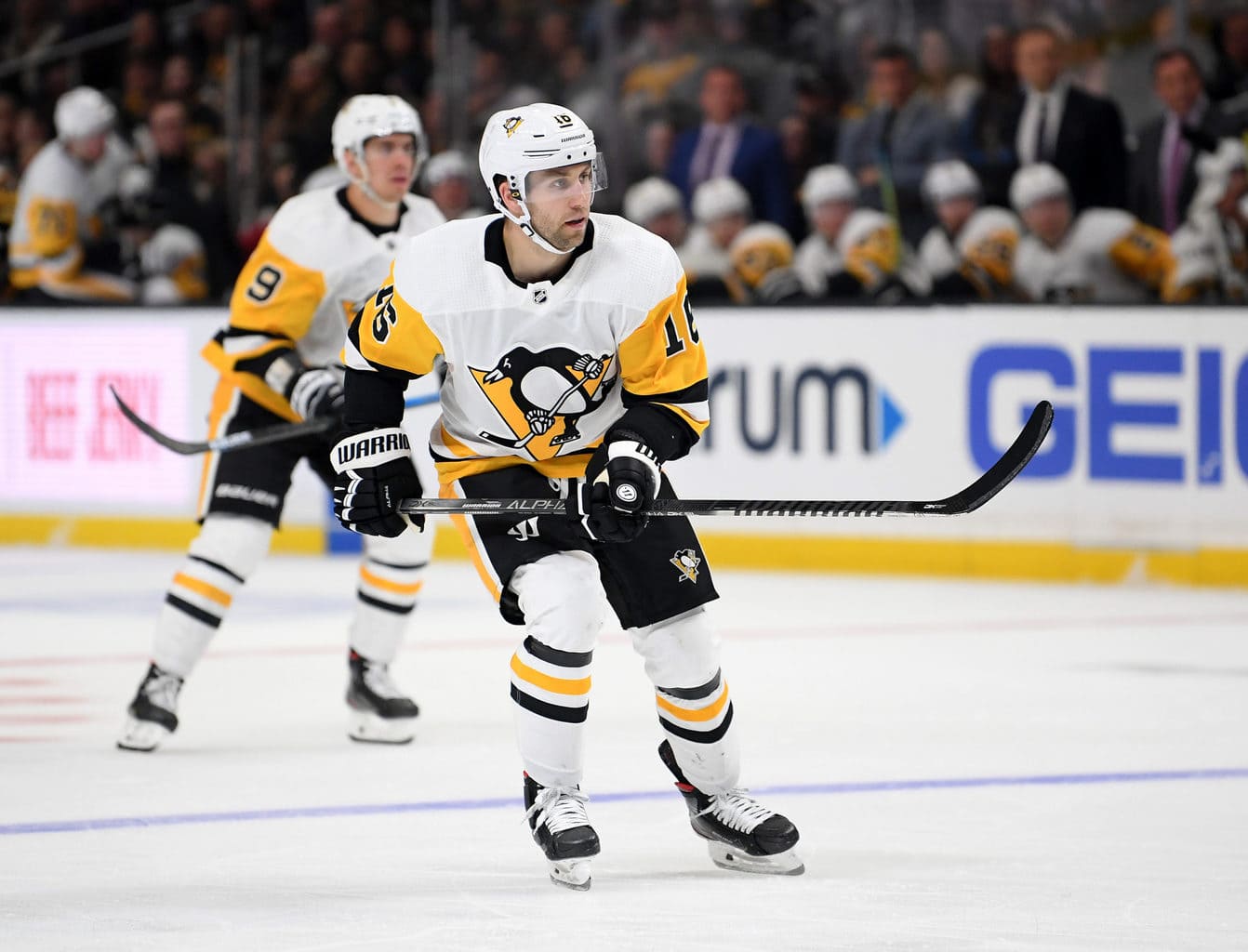 Not much has come of Zucker’s time in Pittsburgh since being acquired in a trade from the Minnesota Wild on Feb. 10, 2020. It wasn’t bad to start with 12 points (six goals, six assists) in 15 games before the NHL shut down because of the COVID-19 pandemic in March 2020.

Once things got going again, Zucker had two goals in four games during the Stanley Cup Playoffs. But Pittsburgh was eliminated by the Montreal Canadiens in the best-of-5 Stanley Cup Qualifiers.

Things got considerably worse for Zucker last season. And that has left him looking for much more.

In 38 games last season, Zucker had 18 points (nine goals, nine assists). That’s not nearly enough for a player given top-six minutes playing on a line with center Evgeni Malkin. To be fair, Malkin missed a bulk of the season after injuring his knee against the Boston Bruins on March 16.

Adding to that, Zucker missed 18 games with a lower-body injury from Feb. 25-March 27. As Malkin and second-line left wing Kasperi Kapanen dealt with their own injuries, that could have made it difficult for Zucker to ever really get going.

Still, Kapanen didn’t have much of an issue. He averaged an NHL career-high .28 goals and .75 points per game in his first season with the Penguins. Zucker just could never find his footing in a similar manner.

But those are just numbers. It’s best to look at how Zucker played instead of the stat sheet on its own. And for the best analysis, there’s no better option than to listen to Zucker himself.

“Yeah, I hope so,” Zucker said when asked Friday if he has another level. “When I first got here, it was good. I think I came in and did what I wanted to do. Last year was awful, to be honest. I didn’t like my game at all. I thought there were some good points. Some really bad points.

“For me, it was a good summer to be able to adjust my game and feel really good coming into this year.”

One area Zucker specifically pointed to for improvement is the quantity, not quality, of his shots. Last season, he averaged 6.19 shots per 60 minutes at 5-on-5. That is the lowest of his 10-season NHL career.

It’s quite obvious that’s not enough, especially coming from a second-line winger on the Penguins. Although it made an attempt to become more physical this offseason, Pittsburgh’s success is still predicated on speed and offense. Defensive responsibility is a requirement, but the Penguins have skill few can match.

Because of that, the players that surround Sidney Crosby and Malkin on the top two lines are asked to contribute consistently. That’s something first-line left wing Jake Guentzel has done since stepping into the NHL in 2017. First-line right wing Bryan Rust has also found that touch the past few seasons, and Kapanen showed he can do the same last season.

“For me, it was a lot of shot total,” Zucker said. “I don’t feel I shot the puck nearly as much as I have in years past. I’d be shocked if it was even 50 percent of my normal total shooting the puck. I don’t know if it was more just trying to pass the puck too much in general or trying to make plays in general.

“I’ve never been known to be a play-maker. I’m a shooter and a goal-scorer. That was a big thing, and something I’m definitely going to focus on more this year.”

As for Zucker’s shot total being 50 percent or less of his normal number, he’s technically correct. He had 67 shots last season and averaged 192 across his final four full seasons in Minnesota. Now, there is a caveat. The 67 shots from last season came in a shortened campaign, where he only played 38 games. That would be on pace for 145 shots in a full 82 games, still well short of his normal total.

“I just think he has to play to his strengths,” coach Mike Sullivan said. “One of the reasons why we acquired him is he plays a straight-ahead game. He’s a gritty player. He’ll go to the battle areas. He’s strong on the puck. He’s got good speed. And he can shoot the puck. That, I think, is the game he needs to play more consistently to be at his best.”

Stepping Up Without Crosby and Malkin

Malkin will miss at least the first two months of the regular season after having knee surgery on June 4. Crosby will be out at least the first week after undergoing a wrist procedure on Sept. 8. As Jeff Carter said when training camp opened Thursday, there will be plenty of players counted on to fill that void.

But it won’t be easy to replace Crosby or Malkin. Maybe it won’t even be possible. If the Penguins are to do it, they’ll need contributions from up and down the lineup. And Zucker would be a key figure in that plan.

Zucker, as a wing, would need some help from his center. Radim Zohorna skated between him and Kapanen on Friday. But if he plays more aggressively, Zucker could find his lost scoring touch and help Pittsburgh pick up a few wins they’d otherwise give away while Crosby and Malkin are recovering.

Crosby should be back soon enough. At that point, Zucker would likely have Carter at center until Malkin returns. If Carter performs anywhere close to how he did after being brought in on a trade from the Los Angeles Kings last season, that would provide more than enough help to get Zucker to where he needs to be offensively.

“I think all of us, especially in the top-six, need to make sure you’re filling those voids,” Zucker said. “We’ll never be able to fill them completely, obviously. Those are two world-class players. But we’ve got to collectively come together and all pick up a little bit more. Definitely chip in more.”

Wes Crosby is a freelance reporter, covering the Penguins for THW and serving as NHL.com’s Pittsburgh correspondent since 2013. He has also covered the Pittsburgh Steelers and Pirates for the Associated Press since graduating from Duquesne University in May 2013. During his tenure with NHL.com, Wes covered the Penguins’ two most recent Stanley Cup runs in 2016 and 2017.