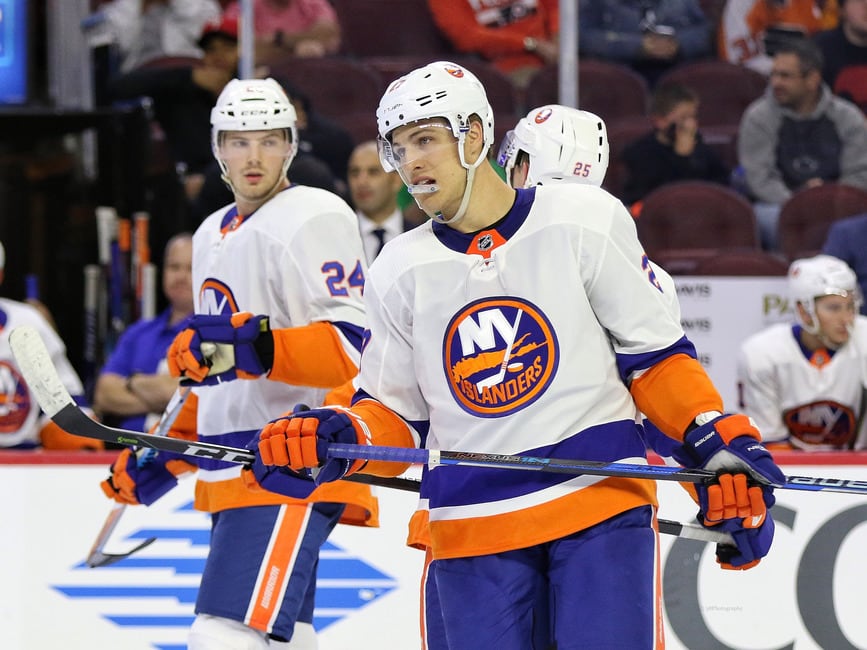 The New York Islanders enter the 2021-22 NHL season with high expectations and the hope of winning the Stanley Cup for the first time since the 1982-83 season. The team is talented across the roster and there are plenty of players that can have breakout seasons or greatly exceed expectations to help out the team.

The Islanders currently have a void on the top line with veteran forward Jordan Eberle selected by the Seattle Kraken in the expansion draft. The expectation is that another veteran forward, whether it be Josh Bailey, Kyle Palmieri, or Anthony Beauvillier, will play alongside Anders Lee and Mathew Barzal on the top scoring line. There is, however, plenty of reason to believe that 21-year-old Oliver Wahlstrom can step up and start on the line at some point in the season.

Last season, Wahlstrom was one of the best young forwards on the Islanders, scoring 12 goals and nine assists, but his accurate shooting and speed on the wing make him a perfect fit to play alongside Barzal and Lee. A few games into the season the 21-year-old forward might assume the role on the forward unit and never look back.

Lee missed the second half of last season with a torn ACL and has spent the entire offseason recovering from the injury. Last season, losing him affected the top line and the entire offense as the Islanders only scored 2.71 goals per game in the regular season. The return of the team captain can help put the offense over the top next season, but more importantly, he could possibly be the forward that helps catapult the Islanders to a Stanley Cup.

Lee can return to last season’s form, where he scored 12 goals in 27 games, but he can also score 30 goals or more this season. Granted, he has only scored 30 goals or more in two seasons in his nine-year career, and the Islanders’ coaching staff will try to avoid rushing their top scorer back from an injury.

However, with Barzal continuing to emerge as the team’s top forward and creating open shots for the rest of the line, the Islanders’ captain can be the beneficiary of plenty of scoring opportunities near the net. Likewise, the 31-year-old forward is going to find space near the net when the team has the puck in the offensive zone as one of the more instinctive goal scorers on the roster, resulting in a surplus of goals this upcoming season.

Ryan Pulock is coming off a season where he contributed 4.4 defensive points shares and 106 blocked shots in addition to 17 points on the offensive end of the ice as one of the best pure defensemen in the NHL, especially in the defensive zone. Often paired with Adam Pelech, he provides the Islanders with a great top pairing that helps form one of the best defenses in the NHL, allowing only 2.23 goals per game last season. In the Stanley Cup Playoffs, the Islanders saw their 26-year-old defenseman emerge as the team’s top blue-line skater, highlighted by four goals from the point, and a blocked shot in the final seconds of Game 4 of the semifinal series against the Tampa Bay Lightning that helped secure the victory.

In the 2021-22 season, Pulock looks to continue to play great defensively, creating turnovers and limiting scoring chances for opponents in the offensive zone, but if he steps up on the offensive end of the ice, can potentially be a Norris Trophy finalist. The Norris Trophy is awarded to the most complete defenseman in the NHL and there are plenty of defensemen more than capable of taking the award this season. If he can add a scoring presence from the point for the Islanders offense with one of the best shots on the defensive unit, the veteran defenseman will be in consideration at the end of the season.

The Islanders winning the Stanley Cup might still be regarded as a bold prediction, considering how many things need to right in a season to hoist the Cup. However, considering the team has reached the semifinals in consecutive seasons and pushed the Lightning to the brink last season, the team will be in the running once again.

Likewise, despite the Islanders failing to have four skaters score 20 goals or more in a season in each of the past four seasons, the forward unit has more than enough forward depth to allow multiple skaters to clear the 20-goal threshold. In the end, the upcoming season will be an exciting one to watch and the team itself looks to be a competitive one, to say the least.

Mike Fink joined The Hockey Writers in November but has been a journalist for multiple blogs since the end of the 2019-2020 NHL season. While not following any specific team, Mike covers the New York Islanders for The Hockey Writers, a team that has turned themselves into legitimate cup contenders with Barry Trotz as the head coach.