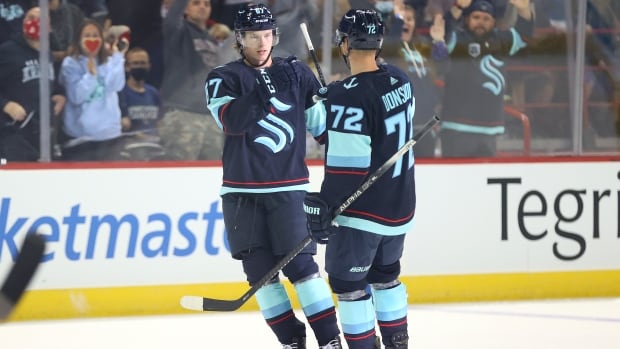 The concourses of the Spokane Arena were jammed. The merchandise lines snaked through the crowds, causing bottlenecks as fans filed in for their first glimpse of the Seattle Kraken.

There seems to be little doubt about the popularity and reach of the NHL’s newest franchise, even when playing 300 miles away from home.

Seattle made its debut on Sunday night with a 5-3 win over the Vancouver Canucks in the pre-season opener for both teams. With Seattle’s home arena putting the finishing touches on its construction, the Kraken have taken their first pre-season on the road to three junior hockey venues in the state.

Spokane was first up, and the 10,208 fans were treated to the Kraken rallying from a 2-0 deficit thanks to three goals in the second period and Morgan Geekie’s two goals in the third period.

Riley Sheahan scored the first preseason goal in Kraken history at 2:32 of the second period off an assist from Nathan Bastian. Jared McCann and Ryan Donato added power-play goals in the second period for Seattle.

There was necessity related to Seattle’s decision to trek across the state for its first game. The home arena for the Kraken — Climate Pledge Arena — is still a couple of weeks from completion and Seattle’s first home game is Oct. 23 against the Canucks.

But there was also a specific outreach behind the decision to play in Spokane rather than keeping all their pre-season games in the Puget Sound region. The Kraken envision themselves a brand for the entire Pacific Northwest and their regional broadcasts will have games being shown throughout Washington, but also into slivers of Northern Idaho and Western Montana.

Playing in Spokane was a way to acknowledge that segment of the fan base, and a way to help establish a connection with the area.

“Tonight is validation that our market isn’t just the Seattle DMA. The amount of people wearing Kraken merchandise, the sincere enthusiasm, there couldn’t be a better place to start,” Kraken CEO Tod Leiweke said shortly before puck drop. “This is just magnificent. It’s heartwarming. It’s stirring and I feel emotional just walking that concourse.”

While the Kraken will play their final two home pre-season games in the Puget Sound area, there could be opportunities in the future for Seattle to take its product on the road in the pre-season.

Alaska has been a market the Kraken have specifically focused on — including promoting donations to help reinstate the men’s hockey program at the University of Alaska Anchorage. Kraken games will be broadcast throughout Alaska and landing that territory as part of their broadcasting rights was a big win for the franchise.

“We hope that through these three games that our partners and us raise, targeting the half a million dollars, that’s how you build relationships. Going up to Alaska and supporting the effort to save the Seahawks hockey program that’s how you build support,” Leiweke said. “Easiest way to do it is winning but there’s other things that are also fundamental to the mission.”

For the first night, the focus was on Spokane and giving a jolt to a normally sleepy Sunday night in the Lilac City. At Lord Stanley’s, a recently opened hockey bar downtown, fans packed every table of the restaurant several hours before the game.

While there were NFL games on the TVs and a handful of fans in Seahawks jerseys, Kraken logos and gear dominated — with the exception of two fans in Red Wings jerseys. And even in the midst of a Sunday afternoon filled with NFL games, TVs were also tuned to the Boston-Washington NHL pre-season game.

Back in Calgary where he played for the past three seasons, Derek Ryan looked right at home despite wearing visiting colours.

Ryan and first-round draft pick Xavier Bourgault each had a goal and an assist on Sunday night as the Edmonton Oilers opened the pre-season with a dominant 4-0 win over the Flames.

“It feels good to come out here, back in the Saddledome, and have a good game,” said Ryan, 34, who as a free agent signed a two-year, $2.5-million US deal in July. “A lot of different emotions coming back here. Spent three good years here.”

After a scoreless first period, Edmonton blew the game open with four straight in the second.

Bourgault set up Ryan’s goal at 6:20 on the power play, which made it 2-0. Eight minutes later, Ryan returned the favour and set up Bourgault to make it 3-0.

“He’s a reliable guy, thinks the game well, plays in so many situations. He’ll be a nice asset for us,” said Oilers coach Dave Tippett of Ryan.

Colton Sceviour, the third member of that line who is at camp on a professional tryout, had two assists.

James Hamblin and Brendan Perlini also scored for the Oilers, who outshot Calgary 49-15.

“The group came out there, battled hard, played really tight defensively, had a couple of big saves when we needed it, and just played a really good team game,” Ryan said. “It’s a fun way to start the pre-season when you have some offence and some success. Everyone’s happy and everybody looks good.”

Also standing out on the blue line was 2018 first-rounder Evan Bouchard, who led both teams with six shots in 22:05 of ice time. He finished with a plus-2 rating.

“You really want to get the feel for the puck and really finding those shooting lanes, and there’s not really a better time to work on it than exhibition games, so I was really trying to do that,” said Bouchard.

After playing 14 games last season with Edmonton, the 21-year-old is looking to make the jump to being a fixture in the lineup this season.

“His poise with the puck is really strong,” Tippet said of Bouchard. “He’s come up the right ways, he understands the game now, he understands expectations for him. And now it’s time for him to do it.”

It was the first game with fans at the Saddledome since the Flames played Vegas on March 8, 2020. But there were plenty of empty seats with the estimated crowd size around half of the normal capacity of 19,289.

“It was awesome,” said Flames head coach Darryl Sutter on having fans back in the rink. “That was the best part. When you think about it, there was only three or four of our guys who played in front of fans last year. So it was pretty awesome.”

But Sutter felt the team’s performance left plenty of opportunity for improvement.

“You just evaluate the individuals,” he said. “Our defencemen were not good enough below the goal line to get the pucks and move pucks, so it was tough to get a rhythm.”

In the first pre-season game for both teams, there was a lack of star power dressed from either side.

Calgary scratched its top two lines in camp, top defence pairing, and No. 1 goaltender Jacob Markstrom. The Oilers lineup — without Connor McDavid and Leon Draisaitl among many other regulars — boasted even less experience.

Both teams split their goaltending. After Dan Vladar was beaten twice on 23 shots, Adam Werner finished up for Calgary, making 24 stops.

For the Oilers, starter Stuart Skinner was perfect in his half of game action, stopping all eight shots he faced. Ilya Konovalov made seven saves in relief.

Shane Pinto took a little time, but it was worth it.

The Ottawa Senators rookie forward weaved around the offensive zone with the puck and then fired the winning shot 25 seconds into overtime for a 3-2 victory over the Winnipeg Jets in NHL pre-season action Sunday.

“I was going to drop it to [teammate Alex Formenton], but I realized they had three forwards and maybe if I faked it to Forme, they would bite on it,” Pinto said. “And he [Comrie] kind of did and I just got my shot off and it went in, so it was nice.”

Formenton had tied the game 2-2 at 12:17 of the third period with a low shot from inside the circle. He also picked up an assist on Pinto’s game-winner.

Anton Forsberg started in Ottawa’s net and stopped 17 of the 19 shots he faced in just over 30 minutes of ice time. Filip Gustavsson got his turn and made 14 saves the rest of the way.

Comrie made 24 saves for the Jets.

“There were some good things,” Winnipeg head coach Paul Maurice said. “You just don’t weigh these games too heavily. There would be big chunks of both teams [that] wouldn’t necessarily be starting an NHL game.”

The Senators opened the scoring in the first with a slick goal by rookie Ridly Greig. The native of Lethbridge, Alta., slid the puck between his skates, kicked it to his stick and then sent a backhand shot past Comrie at 11:30 of the first.

Jets centre Pierre-Luc Dubois replied with a power-play goal with 37 seconds left in the first to make it 1-1, but then had to leave the ice midway through the second because of Greig.

Greig cross-checked Dubois in the face and was handed a game misconduct. The Sens were assessed a five-minute penalty. Dubois returned for the third period and said after the game he got 15 stitches.

“I don’t think he did it on purpose,” Dubois said of Greig. “I don’t really know him, but I know he’s a good player, scored a nice goal in the first.

Jets forward C.J. Suess scored at 2:13 of the second for the 2-1 lead in front of 14,625 vaccinated and masked fans in attendance at the newly renamed Canada Life Centre.

Winnipeg was dinged for four penalties in the first period, including two in the opening five minutes, but Greig scored at even strength. He was the third of Ottawa’s three first-round picks (28th overall) in the 2020 NHL draft.

Aside from Greig’s major penalty, Ottawa head coach D.J. Smith was impressed by the young skater.

“For your first game, you score a goal, you get involved. Obviously, the future is bright for him,” Smith said of Greig. “He can skate, he can make plays, he’s a competitive kid, so looks like we’ve got a really good player.”

Ottawa only registered one shot on goal in the middle frame and were outshot 23-15 after 40 minutes.

Both teams are back in action Wednesday. Winnipeg hosts Edmonton while Ottawa is home against Toronto.

WATCH | What could Canada’s Olympic men’s hockey team look like in Beijing?:

What could Canada’s Olympic men’s hockey team look like in Beijing?