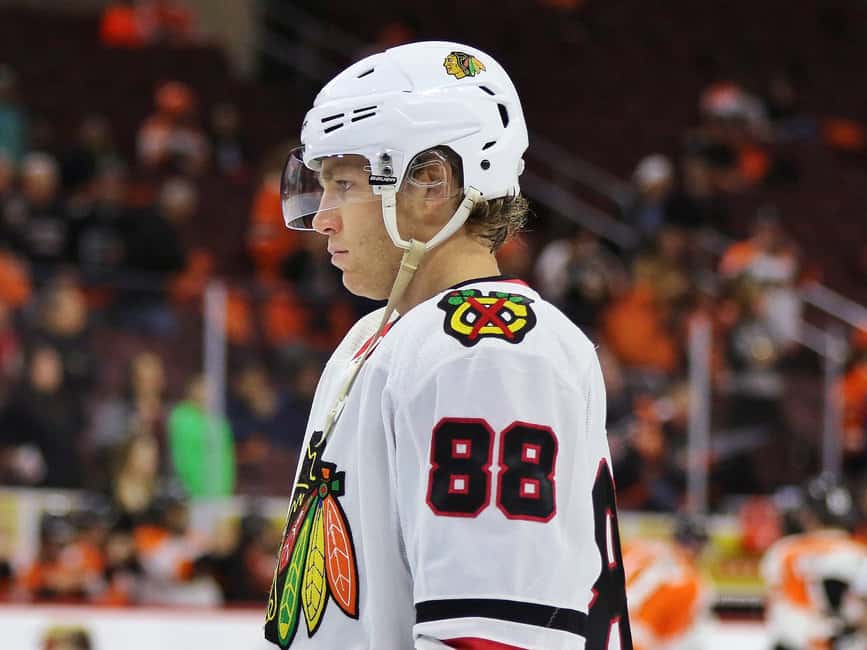 With the NHL season less than a month away, the NHL Network has been putting out their annual top 50 players list. These lists are always controversial, as ranking the league’s top players is an extremely difficult, if not impossible task, especially when trying to compare forwards, defencemen and goaltenders. For the most part, they do a good job, and while many complain about certain players, the lists never seem too egregious. That is, until this year, where one snub in particular caught many eyes.

That snub is none other than Chicago Blackhawks forward Patrick Kane, who failed to crack their top 10. Again, this is a very tough list to make, but given the 32-year-old’s resume, along with the fact he is not showing any signs of slowing down, his omission from the top 10 is very peculiar (He was ranked 11th).

Kane is Still an Elite Player

For the 2020-21 season, Kane’s 66 points tied him for fifth in league scoring. The only players who had more were Mitch Marner, Brad Marchand, Leon Draisaitl and Connor McDavid. While those four are all fantastic players, it is impossible to argue the fact that they play on far superior teams, unlike Kane, who was apart of a weak Blackhawks roster.

This was being recognized for a good portion of the season, as Kane was regarded as the Hart Trophy favorite midway through the 2020-21 season. Unfortunately, the Blackhawks started to slide down the standings shortly after, which lessened his case for the award. However, had he led his team to the postseason, he undoubtedly would have been a Hart Trophy finalist, and while he likely wouldn’t have won it over McDavid, he certainly would have had a compelling case.

Amongst the League Leaders

Kane’s dominance in the league has been going on for quite some time now. Over the past 10 seasons, he leads all NHLers with 785 points, doing so in just 712 games. Over the past five seasons, he ranks fourth in points, coming in behind only McDavid, Draisaitl, and Marchand with 425 in 371.

Finally, in the past three seasons, he jumped back to third place on the points list — trailing only McDavid and Draisaitl –with 260 points in 207 games. Some of the games truly elite players in guys like Nathan MacKinnon, Artemi Panarin, and David Pastrnak come in behind him on this list, proving just how special of a player he is.

However, despite an incredible 2020-21 season in which he scored 41 goals and 66 points in 52 games, I personally don’t believe Matthews has done enough to warrant a spot in the top 10 over Kane just yet. Leafs fans will certainly disagree with that notion, but in all honesty, the player himself would likely agree that he has not done anything in his career yet to be considered a better player than his fellow countryman at this point and time. This was both a snub and a mistake, in my opinion.

Fuel for the Fire

Though NHL players tend to be quite humble, and not speak out on these lists compared to athletes in other professional sports, you can bet that if Kane sees this list, it will certainly motivate him to prove it wrong. He has done nothing to suggest he should be considered anything but a top 10 player in the NHL, and possibly even top-5. Now that the Blackhawks are expected to be a better team this upcoming season, he could very well have one of his best NHL seasons to date.

Colton Pankiw is a former Jr. A hockey player who now provides his knowledge of the game through writing. He’s been a very active and reliable source for nearly two years at The Hockey Writers. He is a credentialed writer for the Calgary Flames but also does features on other teams throughout the league. Other writing contributions include: Oil On Whyte, NHLtradetalk.com, and Markerzone.com. Colton is also a co-host of both Oilers Overtime and Flames Faceoff podcasts. Any interview requests or content info can be made through him on Twitter. Take a look at his work here.