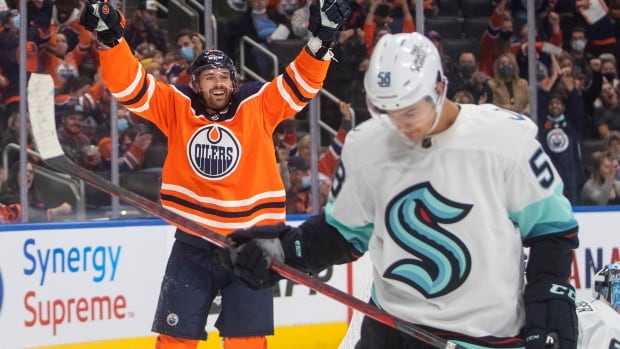 Brendan Perlini is making a strong case for a return to the NHL.

Perlini scored twice and Connor McDavid had a goal and two assists as the Edmonton Oilers cruised to a 6-0 pre-season win over the expansion Seattle Kraken on Tuesday.

After making stops in Detroit, Chicago and Arizona — where he had 17 goals in the 2017-18 season for the Coyotes — Perlini opted to fine-tune his game in Switzerland last season before jumping back across the pond and signing a one-year, two-way deal with the Oilers before training camp.

“I’m grateful for this opportunity to come here and try and help the team and show what I am all about,” said the 25-year-old forward, who has three goals in two pre-seasons contests.

Perlini knows, though, that he’ll have to have a well-rounded game if he wants to catch on with Edmonton.

“[Oilers head coach Dave Tippett] really wants guys playing that 200-foot game and over the last year-and-a-half since I have been out of the NHL, that is something I have really worked hard on,” he said. “Stealing pucks and things like that. I think I have added a whole new dimension to my game. I just look to keep putting in good efforts going forward.”

Tippett, who coached Perlini in Arizona, said he’s off to a good start with the Oilers.

“One of his greatest attributes is that he shoots the puck a ton and that is what he is doing right now,” he said. “He is playing for his life right now, and that is good to see, a guy who is giving it everything that he has got.”

Edmonton started the scoring six minutes into the opening frame as Nurse went coast to coast before beating Kraken goaltender Chris Driedger with a wrist shot from the slot.

Driedger stopped 18-of-23 shots before being replaced by Joey Daccord to start the third period. Daccord had nine saves in relief.

After stopping all 18 shots he faced, Mike Smith made way for Mikko Koskinen in the Edmonton net midway through the second. Koskinen registered 16 saves.

The Oilers, who have had the top power play in the NHL over the past two seasons, were given a five-on-three advantage with eight minutes remaining in the first and made the most of it as Ryan Nugent-Hopkins fed a puck in front to Puljujarvi, who was able to shovel it home.

Edmonton made it 3-0 four minutes later as McDavid made a stellar pass to Hyman at the side of the net for the redirect.

Hyman was making his first-ever appearance for the Oilers after signing as a free agent this summer following six seasons in Toronto.

“It was fun to get to play with [McDavid] tonight and as we play more we will figure out each other’s tendencies, but I thought it was a good start,” Hyman said.

The Oilers added to their lead with four minutes left in the middle period as Perlini scored his second of the pre-season on a give-and-go with Devin Shore.

They made it 5-0 with 1:36 left in the second as Leon Draisaitl slipped it to McDavid at the side of the net for a power-play goal into a wide-open net.

Perlini continued to open some eyes two minutes into the third, rifling in a long one-timer.

Both teams are right back at it on Wednesday, as the Oilers travel to Winnipeg and the Kraken head to Calgary to face the Flames.