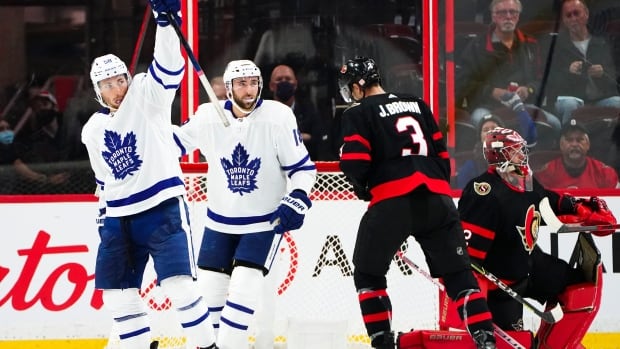 The Maple Leafs left their starts in Toronto but still managed to shut out the Senators 4-0 in pre-season action Wednesday, led by a three-goal performance by Michael Bunting.

Meanwhile, the Winnipeg Jets downed the Edmonton Oilers 5-1 while the Seattle Kraken needed a shutout and a goal from former Flames captain Mark Giordano to beat Calgary 4-3.

Bunting signed a two-year deal with Toronto this past summer and is looking to impress his new employer.

The 26-year-old forward is on his first one-way contract and where he fits with the Leafs in remains to be seen. At this point, he’s not overly concerned.

“I’ll be busting my [butt] no matter where I am,” said Bunting. “Whether it’s first line, second line, third line, fourth line. I’m bringing my game wherever it is.”

For the Ottawa Senators, the best thing about Wednesday night’s game was that it won’t count in the standings.

“Thank God it’s an exhibition game,” said Smith. “We didn’t have the puck a lot, we didn’t shoot a lot, we just didn’t play anything the way we want to play.”

Petr Mrazek wasn’t overly busy and stopped all 19 shots he faced in the Toronto net.

WATCH | Moment of silence in honour of National Day for Truth and Reconciliation:

Senators, Maple Leafs hold moment of silence ahead of Truth and Reconciliation Day

Before their pre-season game, the Ottawa Senators and Toronto Maple Leafs held a moment of silence on the eve ahead of Truth and Reconciliation Day, and Mary Nahwegahbow sang the national anthem in English, French and Anishinaabemowin. 4:07

“The one thing I was really surprised by in pre-season Game 3 is the energy of the team, the positivity,” said Keefe. “The competitive spirit of the group was really strong. Really impressed with the effort.”

The Leafs’ rather innocuous lineup gave the Senators a challenge right from the start. Ottawa — who had a number of veterans playing — seemed to lack any kind of intensity and was flat for much of the game.

“It’s good in the long run because you don’t want that to happen in the regular season,” said Smith. “That’s just not the way we play. We had no physicality, we never got on the inside, we didn’t shoot pucks.”

Bunting scored his third of the night in the final 90 seconds of the game.

“He’s as hungry as anyone to score,” said Keefe. “To get off to the start he has in the pre-season is a tremendous sign for him and us.”

Toronto was 3-for-8 on the power play, while Ottawa went 0-for-5 with the man advantage as they struggled to create any momentum.

Smith admitted that maybe some of his veterans were guilty of looking at the Leafs lineup and underestimating their desire. Without its big stars, Toronto players were looking to make an impression and they did just that.

It may have been a pre-season tilt against a watered-down opponent, but forward Jansen Harkins made a case for full-time employment with the Winnipeg Jets on Wednesday night.

Harkins, who was in and out of the lineup last season, had two goals and an assist to lead Winnipeg to a 5-1 victory over the Edmonton Oilers in a game before 15,078 fully-vaccinated fans at the Canada Life Centre.

“Pretty fun, obviously,” Harkins said. “Any time you come back from a summer off-season, it’s fun to get back on the ice. The fans are pretty electric and scoring goals is one of the best things you can do out there. Yeah. Good night tonight.”

Harkins was aware of the impression he has made thus far.

“We’ve got a lot of young guys fighting for spots, a lot of good players,” he said. “We’ve generally been a pretty veteran team the last few years, so there’s a couple of spots right now everyone’s really chasing for. Competition is pretty good.”

Evgeny Svechnikov, who played on a line with Harkins and centre Cole Perfetti, had a goal and two assists.

“I think Harks is obviously pretty fast,” said Svechnikov, who set up Harkins with a nifty pass on his second goal. “Any time he has a chance in the rush, you can hit him and have a breakaway like he scored. It’s been fun with that.

“And obviously Perfetti, Cole, he is very skilled and, in small areas, is very good with his hands and can create space and make plays. I think we all feel that and it’s been fun.”

“They’ve been pretty good,” he said. “They got a chance to play together a little bit. Some good things with the puck. I think they worked real hard at their game.

“For those guys, exhibition means a lot. Those are big games for those three guys. They’ve got something to show, something to prove. And they worked with each other on the bench, that’s part of it, too. They were quick, made plays, showed some confidence. It was good.”

Austin Poganski and Kyle Connor rounded out the scoring for Winnipeg.

Jaden Schwartz had two goals and an assist and Jordan Eberle scored the shootout winner on Wednesday night as the Seattle Kraken won 4-3 over the Calgary Flames.

Former Flames captain Mark Giordano also scored for the Kraken, who improve to 2-1-0 in pre-season play.

Dan Vladar made 18 saves in his first-full game and third appearance for the Flames. He is expected to be Jacob Markstrom’s backup this season.

Philipp Grubauer got the first two periods for the Kraken, stopping 9-of-11 shots. Joey Daccord played the third and overtime, stopping 10-of-11.

Seattle defenceman Mark Giordano scores against his former team during the first period. Giordano was a Flame for 14 years and captain for eight. 0:54

Tied 2-2 in the third, Stone’s turnover below the goal line proved costly as Eberle immediately set up Schwartz alone in front and he one-timed a shot behind Vladar at 12:37.

Backlund got the Flames back to even at 17:33 when he collected a loose puck along the boards, moved in, and fired a shot inside the far post behind Daccord.

Calgary dressed its most-experienced lineup yet with all three members of the new No. 1 line of Matthew Tkachuk, Elias Lindholm, and Blake Coleman making their pre-season debut.

Johnny Gaudreau also made his season debut on a line with Mikael Backlund and Andrew Mangiapane. Sean Monahan has been centring that line at practice, but coming back from hip surgery, coach Darryl Sutter has said Monahan won’t get into games until towards the end of the pre-season.

The game marked Giordano’s first time back in the Saddledome after being selected by Seattle in the expansion draft.

He made an immediate impact, scoring the opening goal three minutes into the game when he jumped up into the rush, took the puck to the net and slipped a backhand through Vladar’s pads.

Giordano’s return was acknowledged during the first television timeout of the first period via a short video tribute. Afterwards, Giordano hopped over the boards and waved his stick to the applauding fans, while Flames and Kraken players banged their sticks on the ice.