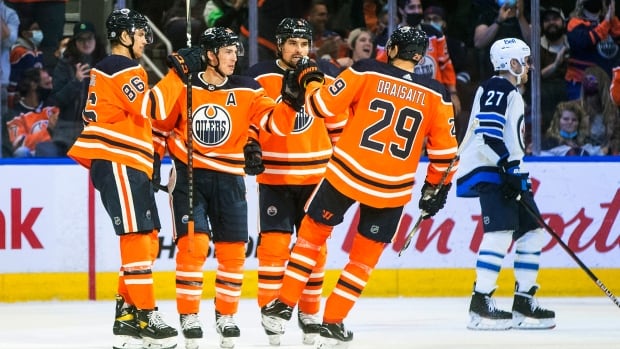 Puljujarvi had a pair of goals as the Edmonton Oilers snapped a two-game skid in pre-season play, defeating the visiting Winnipeg Jets 4-3 on Saturday.

“His confidence grew all of last year and he has come into camp in great shape,” said Oilers head coach Dave Tippett of the 23-year-old Puljujarvi. “He is confident playing with Connor. He is moving. He shoots the puck and goes to the net.

“When you are in front of the net you are going to find some goals, and that is what he did tonight.”

Ryan Nugent-Hopkins scored the game-winning goal with 1:56 remaining in the third period to break a 3-3 deadlock. Devin Shore also scored for the Oilers (3-1-1).

Kyle Connor, Mark Scheifele and Josh Morrissey replied for the Jets (1-1-1), who suffered their first loss in regulation in pre-season.

Down 3-1 in the third, Winnipeg fought back to make it a one-goal game with 8:24 left as Declan Chisholm sent a pass through a defenceman’s legs to allow a back-door tap-in by Scheifele.

Edmonton’s Ryan Nugent-Hopkins buried the backhand feed from Leon Draisaitl to make it a 4-3 victory over Winnipeg at home. 0:51

The Jets then tied it up a couple of minutes later as Morrissey was left alone in front to bang home a pass from Evgeny Svechnikov.

“You want to win every game you play. I don’t care if it’s exhibition or not, so you get back in that game and you want a better result,” said Jets head coach Paul Maurice. “I think those D pairings are going to be just fine for us, they’re going to work well. Still a real competition for those open jobs on the fourth line and they’re making it tough.”

Edmonton regained the lead with just under two minutes left in the game as Leon Draisaitl stripped a puck and then sent a long backhand pass through traffic to Nugent-Hopkins, who beat Eric Comrie for the winner.

“You have to work to a spot, because even if [Draisaitl] is not looking, he knows that you are there,” Nugent-Hopkins said. “He’ll bring at least two guys to him. That pass at the end, there are maybe a couple of guys in the league who can strip a guy and then make that pass without really looking. Playing with him, you have to know that he is going to be able to do that.”

The Jets took an early lead four minutes into the opening frame after the Oilers allowed an odd-man break on the tail end of their first power play. Edmonton goalie Mikko Koskinen was able to make an initial save on Kristian Vesalainen, but had little chance on the rebound as Connor notched his second of the pre-season.

Edmonton bounced back on their next power play late in the first as Puljujarvi tipped a long Draisaitl shot past Jets netminder Comrie.

After several quality stops by Koskinen, the Oilers surged ahead 3-1 with goals just over two minutes apart.

With seven minutes left in the second period, Shore tipped home a Brendan Perlini shot, which was followed up by Puljujarvi scoring his second of the game and third in exhibition on a booming slap shot.

The Jets are back at it on Sunday as they head to Vancouver to face the Canucks. The Oilers remain home to welcome the Calgary Flames on Monday.

Brendan Gallagher understands he may be shuffled around from line to line this season, and that suits him just fine.

Making his return to the ice, Gallagher helped the Montreal Canadiens notch a 2-1 comeback win Saturday in the second game of a pre-season back-to-back with the Ottawa Senators. The Canadiens lost the first game 7-2 on Friday.

Down 1-0, Gallagher levelled the score for the Canadiens with an unassisted goal on the power play at 13:35 of the second period. The winger intercepted Josh Brown’s clearance and beat Anton Forsberg with a heavy wrist shot.

“My game can translate pretty easily regardless of what line I’m on, so wherever the coaches want to play me, you won’t hear me complain,” Gallagher said. “You hope for an opportunity to help the team and I know I’m gonna get that. You understand the role and you just take advantage of whatever you get.”

Ducharme called Gallagher “the ultimate example of a team player.”

“He might be a guy that may move up and down the lines because he can challenge the other guys,” Ducharme said. “You need to work hard every night with him. He might be the one that sees the most teammates this season.”

Suzuki got Montreal’s go-ahead goal early in the third. From the back of the net, Toffoli placed the puck in the slot and the young centre took a blocker-side shot to give Montreal the 2-1 lead.

Nick Suzuki netted Montreal’s final goal in their 2-1 victory over Ottawa on Saturday. 0:47

Forsberg played two periods, allowing one goal on 18 shots. Filip Gustavsson took over in the third period. He stopped four shots but gave up the game-winning goal.

The Senators opened the score for a second straight night. Tim Stutzle redirected Evan Brannstrom’s shot past Cayden Primeau to give Ottawa a first-period lead.

With Carey Price’s injury, Montreal’s goaltending duo is still up in the air. Primeau says he is simply focusing on giving his best during pre-season.

“I don’t make those decisions. Obviously I would want to be with the best of the best, but at the end of the day you got to go to work every day,” Primeau said. “There are pros and cons to both scenarios, so no matter what happens there are benefits that can come from both.”

The Canadiens picked up Florida Panthers netminder Samuel Montembeault from the waiver wire before Saturday’s game.

Without saying if Primeau or Montembeault would be backing up Jake Allen in Montreal, Ducharme said he welcomed the added depth.

“We always liked Samuel and he’s still a young goaltender at 24 years old,” Ducharme said. “We like his potential and we’ll see what happens. It adds even more depth to our organization at this position and we’ll see what unfolds. With Carey’s injury, it’s always good to have more options.”

Primeau said that seeing the news before the game did not affect his performance in Montreal’s win.

“Every time you have a chance to play, you gotta give it your all,” Primeau said. “There shouldn’t be extra motivation and I’m excited to have another person to push us in the organization.”

Brandon Baddock, Laurent Dauphin, Jean-Sebastien Dea and Michael McNiven will need to go through the waiver wire. Ducharme also hinted that another round of cuts could occur following Monday’s practice.

Entering their final week of pre-season, the Canadiens head to Toronto to take on the Maple Leafs on Oct. 5. They return to Montreal to host the Sens once again on Oct. 7.

The Senators return to Ottawa to host the Maple Leafs on Oct. 4 before finishing their pre-season in Montreal.

Mark Stone and Glenn Gawdin scored 5:41 apart in the second period to push the Calgary Flames past expansion Seattle Kraken at ShoWare Center in Kent, Wash., on Saturday.