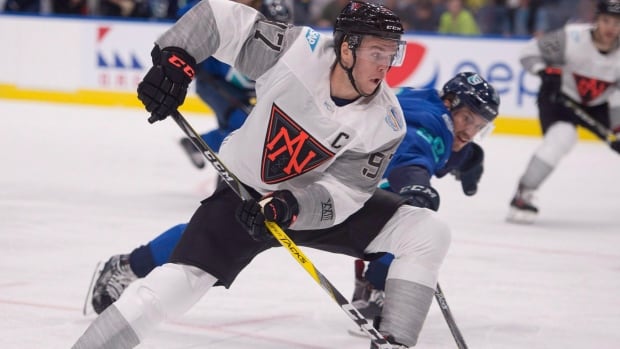 Now that we know the NHL will be heading to Beijing to compete at the Olympics, sports talk in this country will centre around picking Team Canada.

When you throw in that the NHL season will be in progress -  players are essentially auditioning for a spot – the rosters will change on a regular basis.

Between now and the team announcement, Rob Pizzo will be giving you the many versions of his Team Canada, as well as some players who are doing their best to get GM Doug Armstrong and coach Jon Cooper to notice them.

There may be a lot of time (and hockey to be played) before the team announcement is officially made, but why wait!

Teams can dress 13 forwards, seven defencemen and two goalies (plus an extra player at each position).

The NHL season is now in part a tryout for various Olympic teams. Rob Pizzo breaks down his current version of Team Canada. 4:10

His numbers (and physicality) over the last two years have not only put him on the Team Canada map, but also given him first line potential.

He could be in a coma and I’m still putting him on the team.

After these three dominated together at the World Cup, Jon Cooper should not mess with a good thing.

Brayden Point has led the playoffs in goals over the last two years. Barzal has averaged 72 points over his first four seasons and Stone was one of the best defensive forwards in the game. Not a bad third line.

Just looking at this “fourth line” should not only make you laugh, but point to Team Canada’s depth at forward. What other country can put a Conn Smyth trophy winner (O’Reilly) this far down on its depth chart?

Back-to-back Cup champ, and missed out on the 2014 Games because of an injury.

When you look at the possible blue-line, things are a little tougher to pick. The average age of the players above is just 26, and there is a serious lack of international “best-on-best” experience.

Single handedly led the Habs to the Stanley Cup final.

Has to look better than he did last season, but could be a good chance to give him some Team Canada experience for future tournaments.

A Hart trophy winner who is now on a Bruins team that could allow him to put up some big numbers.

Lots of experience donning the Maple Leaf, but this is a tough roster to crack.

Referee sends wrong Sedin twin to penalty box
Mason McTavish is hoping to lead the Canadian juniors to gold, despite the nine that got away
What you need to know ahead of the restaged 2022 World Junior Championships
Lohin heads to Wolf Pack with ‘a lot to prove’
U.S. overwhelms Switzerland at world juniors