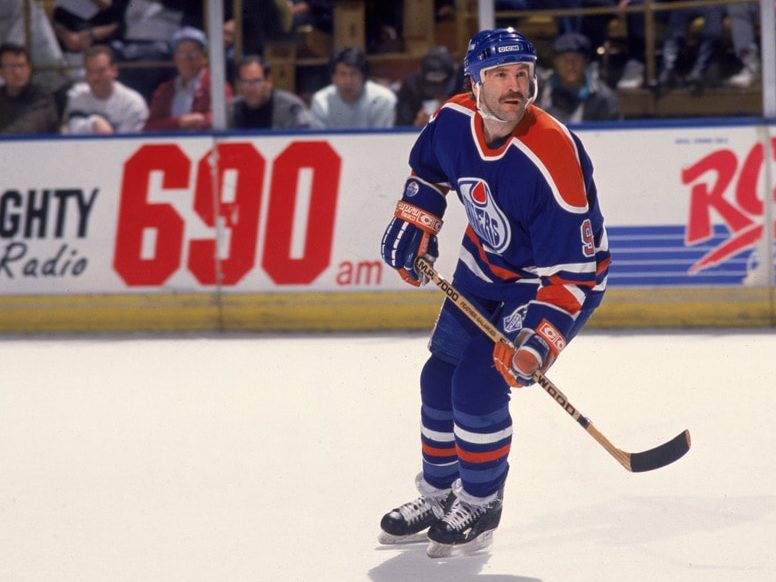 There have been many instances of former players returning to the Edmonton Oilers years after their initial go-round with the National Hockey League club.

Kevin Lowe came back to provide invaluable leadership and championship experience that helped the new generation of Oilers achieve their first playoff success.

Ryan Smyth’s homecoming righted what many saw as a terrible wrong, allowing the universally beloved winger to close his career with the team he never wanted to leave.

And then there’s the curious case of Glenn Anderson.

In January 1996, there was for the first time in a long time a feeling that the Oilers were looking at a brighter tomorrow. The signing of Curtis Joseph and the concurrent trade of Bill Ranford symbolized that the team had finally turned the page on a glorious past that was seeming more and more like ancient times.

Apparently, however, Glen Sather wasn’t quite ready to completely close that chapter. On Jan. 25, the Oilers GM claimed Anderson off of waivers, bringing the then-35-year-old winger back to the city where Anderson had spent 11 seasons, won five Stanley Cups and scored a ton of goals, before being traded to Toronto prior to the 1991-92 season.

The Oilers were sitting three points out of a playoff spot in the Western Conference, and making a bit of a surge, with three wins in four games since Joseph’s debut. Perhaps Sather thought Anderson (who had since added a sixth ring, winning the Stanley Cup with the New York Rangers in 1994) could bring just enough skill and know-how to lift the young Oilers into postseason contention.

But whatever Sather’s reasons for wanting the veteran forward, Anderson wanted none of it.

Anderson, who last skated in the NHL the prior spring as a member of the St. Louis Blues, had started the 1995-96 season with a pro team in Germany.

Needing just eight goals to join the NHL’s exclusive 500-goal club, Anderson looked to put the finishing touches on his career and wanted dearly to do it in his hometown of Vancouver. He made overtures to Vancouver Canucks GM Pat Quinn, who signed the veteran forward for the remainder of the season. (From ‘Anderson’s Dream Dies’, The Chicago Tribune, 2/4/96).

Anderson was all set to join the Canucks. He would just need to make it through the waiver wire first and Sather wasn’t going to let that happen. The Oilers GM put in a claim just minutes before Anderson was set to clear. This, despite Anderson calling Sather and pleading with his old coach not to do so.

“But these things happen in life,” Anderson is quoted in The Chicago Tribune. “Slats (Sather) is Slats. He’s going to do what’s best for him and the team. He doesn’t care where you want to play.”

“I don’t think I can get inside Glen Sather’s head,” The Chicago Tribune quotes Quinn. “Should you feel compassion for a guy who’s played in the league for a long time and wants to play in his hometown? Maybe not. It’s unfortunate for Glenn because he wanted to play here.”

Anderson’s Oilers re-debut came 25 years ago, Jan. 30, in Calgary against the Flames. Edmonton entered the game trailing Calgary by one point for the West’s final playoff berth.

He needed less than half a game to score, his first goal with the Oilers nearly five years, beating Flames netminder Trevor Kidd at 4:47 of the second period to put Edmonton in front 2-0.

For a moment, it was looking like a storybook reunion. Then Calgary stormed back to win 3-2 in overtime. The Oilers dropped four straight games before beating the Flames on Feb. 11, at the Edmonton Coliseum, with Anderson potting the winning goal.

Anderson scored four times in his first six games, but the Oilers’ playoff hopes – already slim to begin with – were fading further.

On March 6, the Oilers were beaten 3-2 in Los Angeles – their 12th loss since Anderson’s arrival – and fell nine points out of the playoffs with just over a month remaining in the season. It proved Anderson’s last game in blue and orange.

Back to the Blues

Sather had promised to move the six-time champ to a Cup contender if the Oilers weren’t in the hunt and put Anderson on waivers so the forward could get picked up by the Blues. (From ‘Anderson Will Get His Playoff Wish, Edmonton Journal, 3/11/96). In 17 games with the Oilers, Anderson notched 10 points, but Edmonton only won four times.

The Edmonton Journal anonymously quoted one member of the team as saying, ”It was like he walked back in and assumed the captaincy”, to which Anderson responded:

”I told the guys from the beginning that if they had a complaint about me to get it out in the open right away. I told them if there was something they didn’t like about me or anybody else, let’s talk about it.

”If guys are saying things, then they’ve got a long way to go; obviously, they haven’t won. Hey, I feel bad even coming here; right from day one I was reluctant to come here.

St. Louis claimed Anderson on March 12. The Blues were loading up for a championship run, having just acquired Wayne Gretzky from the Los Angeles Kings to join a roster that already included four other future Hall of Famers in Grant Fuhr, Brett Hull, Al MacInnis, and a young Chris Pronger.

Those dreams, however, were dashed in the second round of the playoffs. After St. Louis lost to Detroit in overtime of Game 7, Anderson called it a career.

While his feelings towards the Oilers might not have been so warm and fuzzy at the time, 25 years later it’s like the events of 1996 never happened; the Hall of Famer remains an essential part of franchise history and has returned to Edmonton several times for events celebrating the glory years.

If there ever were any hard feelings between Anderson and Sather, consider the hatchet buried; Sather was there when Anderson had his No. 9 retired by the Oilers in 2009, Anderson was there when a banner honouring Slats was raised to the rafters in 2015.

The Oilers, of course, went on to make the playoffs and author stunning playoff upsets in both 1997 and 1998. It may have at the time that his words fell on deaf ears, but perhaps Anderson taught his young teammates a thing or two after all.

Brian is an Edmonton-based sports writer and broadcaster. His experience includes working as a sports reporter for the Edmonton Sun, where he covered the Edmonton Oil Kings 2013-14 Memorial Cup championship season.