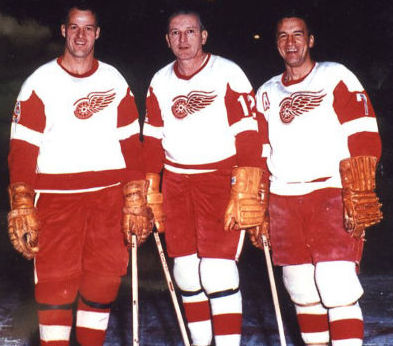 Not many of us remember the 1950s, never mind the 1950 Stanley Cup Final between the Detroit Red Wings and New York Rangers. Before 2020, one would have thought the 1950 NHL playoffs was one of the craziest postseasons in sports history between the stunning victories, impressive legends, and odd hosting locations. Not quite playing hockey in bubbles odd but still weird as we flashback 70 years to a time where Nat “King” Cole dominated the Billboard Music Charts and a gallon of gas cost a measly 18 cents.

How the Red Wings Made the Final

The 1949-50 Detroit Red Wings were a fantastic squad that was led by coach Tommy Ivan. The Red Wings made the Stanley Cup Final in 1948 and 1949 under Ivan but were swept by the Toronto Maple Leafs in both series. However, after going 37-19-14 during the regular season for the best record in the NHL in 1949-50, things felt different for Detroit this time around.

That year, the Red Wings were led by 24-year old Ted Lindsay and a 21-year old Gordie Howe, both of whom turned out to be pretty good. “Terrible” Ted led the NHL in assists (55) and points (78) while Howe finished tied for first, along with Montreal Canadiens legend Maurice Richard, for even-strength goals as they both scored 30 that season. Detroit also had reigning Hart Trophy winner Sid Abel, who averaged a point per game in 1949-50, and a pair of future Hall of Fame members between the pipes in Harry Lumley and Terry Sawchuk. The Wings also had one of the best D-man in the game, Red Kelly, running the blueline for them while a 19-year-old Marcel Provonost would join the team for 9 playoff games.

With the best regular-season record, Detroit secured first seed and home-ice advantage in the playoffs. It also set them up for a first-round matchup with the third-seed Toronto Maple Leafs, thanks to a rule change in 1943 that pitted the first seed with the third while the second seed would face the fourth seed. Back when there were only six teams, aka The Original 6, this was the best way the NHL could ensure the top would be playing for the Stanley Cup. But before the Red Wings could think of the Stanley Cup, they’d have to survive the first round of the playoffs.

Beat the three-time defending Stanley Cup champions Maple Leafs four times and you’ll be playing for the Stanley Cup. That’s all coach Ivan had to tell his boys to get them prepared for their semifinal playoff series Toronto. It would be the fourth consecutive year these teams would meet in the postseason, with the Leafs winning the last three times. With the young studs leading the charge, things would be different for Detroit this year.

The series did not start out well for the Red Wings, as they were blown out 5-0 on home ice by the visiting Leafs. To add salt to the wound, Howe suffered a serious head injury in Game 1 that would force him to miss the rest fo the playoffs. Joe Klukay scored two goals to give Toronto an early series advantage, but it wouldn’t last long as Detroit earned a hard-fought 3-1 victory in Game 2. With the first two games split, the series moved to Maple Leaf Gardens, a building where the Wings had not won a postseason game since 1947.

Game 3 was on Saturday, April 1, 1950, which meant it was on Hockey Night in Canada and Foster Hewitt’s legendary voice would be broadcast on Canadian airwaves coast to coast. That momentum would be enough to power the Leafs to victory as they would shut the Red Wings out once again, scoring two second-period goals en route to a 2-0 win. With two days off after Game 3, Detroit came well-rested for Game 4 as Leo Reise Jr scored 38 seconds into double overtime to even the series once again. There would be more what that came from.

Both teams would return to the Detroit Olympia for Game 5, but the Leafs would win 2-0 once again, shutting out the Red Wings for the third time in the series. With Ted Kennedy scoring the game-winner in the first period on the power play, it meant that the Red Wings would face elimination inside Maple Leaf Gardens on Saturday night. It wouldn’t be easy but if anyone could do it, it would be this Detroit team.

Game 6 would be the first time Toronto was shut out in the series as Detroit beat Toronto 4-0, with four different Red Wings scoring goals. With the win, the series would go the distance as Game 7 would be played the very next day at the Detroit Olympia. There was no rest for the wicked and it would all come down to one game in the place known as Hockeytown.

The game would start quite gritty as four penalties were called in the first 6:05 of the game. However, no goals would be scored as the Red Wings and Maple Leafs continued to battle down the stretch. In fact, after 60 minutes of play, the game was heading into overtime tied at zero. It wasn’t until Game 4 hero, Leo Reise Jr, put home the series winner at the 8:39 mark in overtime. With the goal, Detroit would win the game, the series and would play in their third consecutive Stanley Cup, this time against the New York Rangers

In the Stanley Cup Final, the Red Wings squared off with the Rangers, who beat the Montreal Canadiens in five games in their semifinals series. It was the first time Detroit and New York met in the Final since 1937 when the Wings won that series in five games. Fast forward 13 years later and fans got to witness another fantastic series.

The Red Wings threw the first punch, besting the Rangers in Game 1 by a score of 4-1. Four-second period goals would be enough to give Detroit an early series advantage but it wouldn’t last for long. Game 2, which was held at Maple Leaf Gardens due to scheduling conflicts at Madison Square Garden with the circus, saw Edgar Laprade score twice in the third period to help push the Rangers to a 3-1 victory.

Game 3 swung back in the Red Wings favor, as they shut out the Rangers 4-0 in the final game at Maple Leaf Gardens. The series would shift back to the Detroit Olympia with Detroit up one game on New York. However, the Rangers would steal Game 4 after scoring three unanswered goals, including Don Raleigh getting the game-winner in overtime. The series is now even at two as the team that would win two of the next three games would win the Stanley Cup.

Raleigh scored another game-winner in overtime for the Rangers as New York took Game 5 in a close, 2-1 contest. It was a difficult loss for Detroit as the Red Wings were now one game away from elimination, needing to win the next two at home to win the Cup. In Game 6, Lindsay and Abel scored two goals apiece, including each scoring in the third period, as the Red Wings won 5-4 and evened the series. It would now come down to the all-important Game 7.

The Rangers jumped out to an early lead, with Allan Stanley and Tony Leswick scoring in 64 seconds between 11:14 and 12:18 of the first period. It put New York ahead 2-0 after 20 minutes, but the Red Wings battled back in the middle frame, eventually tying the game 3-3 thanks to goals from Pete Babando, Abel, and Jim McFadden. It was all squared heading into the final period of what had been a fierce Stanley Cup Final since the opening faceoff.

The third period was a scoreless twenty minutes, so overtime was needed to solve another game this series. No goals would be scored in the overtime period, meaning the Red Wings were off to their second double-overtime game of the playoffs. Then, at the 8:31 mark of the second overtime, Babando scored his second goal of the night and the first-ever OT goal in Game 7 of the Stanley Cup Final to give the Red Wings their fourth Stanley Cup in franchise history.

The 1949-50 Red Wings would go on to have six members of the team inducted into the Hockey Hall of Fame. Reise Jr, who scored both overtime winners in the series against the Toronto Maple Leafs, played four more NHL seasons before moving back to Hamilton, Ontario to operate a plumbing business.

His teammate, Babando, also played four more seasons after the 1950 Stanley Cup win but carved out a nice career with the Clinton Comets of the Eastern Hockey League in the early ’60s. As for the Red Wings, they went on to win three of the next five Stanley Cups, including defeating the Canadiens in seven games in both the 1954 and 1955 Finals. But it’s the 1950 squad, with the miraculous comebacks and overtime victories, that truly made the Red Wings a special franchise with a special past.

Currently writing about the Detroit Red Wings for THW