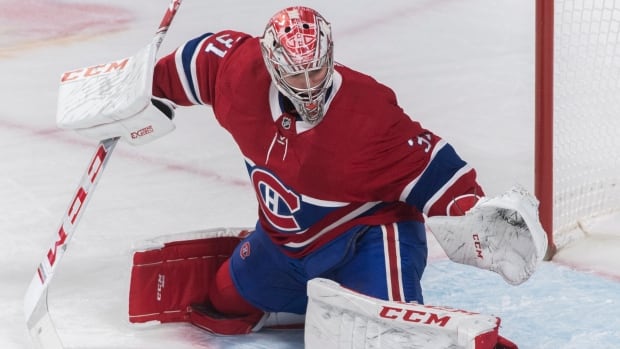 Montreal Canadiens star Carey Price will be away from the team while voluntarily taking part in the NHL/National Hockey League Players’ Association assistance program.

A join media release from the NHL and NHLPA on Thursday announced the 34-year-old goalie’s decision and said there would be no further comment. The NHL and NHLPA first offered the jointly funded player assistance program in 1996. It helps players and their families with mental health, substance abuse and other matters.

General manager Marc Bergevin said in a media update that Price would be away for a minimum of 30 days. Bergevin was emotional when asked about his relationship with Price over the years and the news, which he said caught him off-guard.

WATCH | GM Bergevin gets emotional while talking about Price:

News of Price’s decision follows remarks from head coach Dominique Ducharme on Wednesday that he was unlikely to practice before the season start as he recovered from an illness not related to COVID-19. The superstar goaltender was also recovering from surgery to repair a torn meniscus.

Price’s wife, Angela, posted on Instagram, saying that “part of the privilege of being in the position our family is in, is that we also get a public platform to show how there is and can be a path to light for anyone who is struggling.”

“No matter what is on the line, we hope we can communicate the importance of putting your mental health first, not just by saying it, but by showing up and doing the work to get better,” she wrote.

“Carey’s showing up for himself and our family and making the absolute best decision possible for us. I will continue to show up for him and our kids and seek out the support that I may need on any given day. And it’s incredibly important to us to show our kids that asking for help and letting yourself be supported by others is not just OK, but encouraged — anytime, and under any circumstance.”

WATCH | More from Bergevin as Price enters the assistance program:

Montreal opens its 2021-22 season Oct. 13 at Toronto. The Canadiens reached the Stanley Cup final last season and recently welcomed back forward Jonathan Drouin, who was out during the playoff push, in pre-season games last month.

Drouin had taken a break last year to get help for his anxiety and insomnia.

Bergevin said the mental health of players is “the elephant in the room” sometimes. “We don’t say anything and it’s very personal.”

He said he saluted Drouin and Price for getting help. “If there’s other players in the NHL who have different issues, whatever that is, I think the NHL and NHLPA are really looking at the well-being of their players. And I commend them to do that. I think every general manager is very sensitive to that and we are here in Montreal.

“I believe better days are ahead for Carey and his family.”

In Price’s absence, the Canadiens will look to netminder Jake Allen, who is entering his ninth NHL season. They also picked up goalie Sam Montembeault on waivers from Florida on the weekend.

Though Shea Weber is also out due to injuries, Bergevin said he has a “good group” that can carry through until Price returns.

“We do have leadership in this group and I think they’ll rise to the occasion one more time,” Bergevin said.