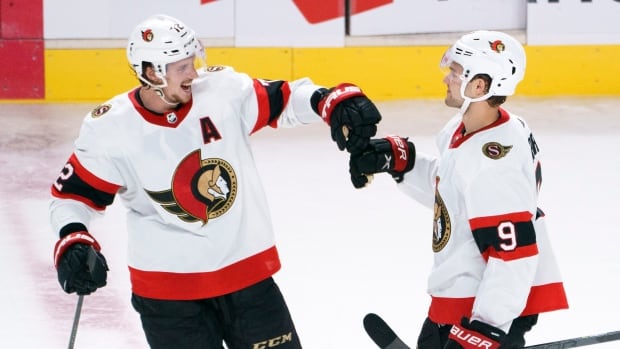 Josh Norris had the shootout winner as the Ottawa Senators finished their pre-season with a 5-4 victory over the Montreal Canadiens on Thursday.

Norris had two power-play goals in regulation time for Ottawa (3-3-0). Chris Tierney and Shane Pinto both scored in the second period as the Senators built a 4-2 lead by the second intermission.

Anton Forsberg made 18 saves to earn the win in net.

Jeff Petry had a pair of goals for Montreal (2-3-1), including one late in the third period to force overtime. Nick Suzuki and Josh Anderson had the other Canadiens’ goals.

Allen is the Canadiens’ presumptive starting goaltender for the first month of the NHL season after it was announced earlier Thursday that superstar Carey Price is voluntarily entering the NHL’s player assistance program.

WATCH | Sens hold on to top Habs in shootout:

Senators top Habs in shootout after wild finish in Montreal

The Ottawa Senators defeated the Montreal Canadiens 5-4 in a shootout Thursday nite during pre-season action. 1:11

Anderson opened the scoring 10 seconds into the game. Artturi Lehkonen passed over to Anderson with loads of space in front of goal and scored with the first shot of the game.

Montreal added a second goal early in the first period. Settled into the offensive zone, Tyler Toffoli found Petry with a cross-ice pass and the defenceman doubled the Habs’ lead.

The Sens had their first goals of the game off the power play. Norris took a powerful one-timer shot and beat Allen, who had lost his stick.

Ottawa equalized with a second straight power-play goal from Pinto.

The Canadiens’ undisciplined play gave the Senators a third unanswered power-play goal. Alex Belzile’s clearance attempt fell straight to Norris in the slot who shocked Allen with his second of the game.

Tierney added a fourth goal for Ottawa. After video review, the referee confirmed that his shot crossed the goal line before Allen made the save giving the Sens a 4-2 lead.

Montreal cut that deficit to one in the third period on the power play. Suzuki got his stick on a loose puck after a save by Anton Forsberg and tap-in brought the score to 4-3.

With one minute to go in regulation, the Habs put away the equalizer. Petry, from the point, launched a slapshot that forced an overtime period.

Jonathan Drouin did not participate in the game. The Canadiens announced that he was out with a non-COVID-19 related illness.

Star Montreal Canadiens goalie Carey Price has stepped away from the game to voluntarily enter a player assistance program. In an Instagram post, his wife wrote about the importance of putting one’s mental health first. 2:41

Leon Draisaitl and Connor McDavid each had a goal and an assist as the Edmonton Oilers came away with a 3-2 victory over the Vancouver Canucks on Thursday in NHL pre-season play.

Derek Ryan also recorded a goal for the Oilers (5-1-1), who won their third in a row.

Quinn Hughes and Nic Petan replied for the Canucks (2-4-0), who have lost two straight.

Edmonton edges Vancouver 3-2 in pre-season action. Leon Draisaitl and Connor McDavid each had a goal and an assist. 1:08

Edmonton’s lethal power play was given a two-man advantage and cashed in seven minutes into the first period when McDavid sent it across to Draisaitl, who blasted a one-timer past Vancouver goalie Jaroslav Halak.

The Oilers power play struck again with 1:26 left in the opening frame when goalie Mike Smith sent a long pass up ice and McDavid put a puck past Halak short to the glove side for his third goal and ninth point in four pre-season games.

The Canucks got one back with a power play of their own as Hughes blasted a long shot through traffic past Smith two minutes into the second period.

Edmonton regained the lead with an even-strength marker midway through the middle period as Ryan tipped in a Duncan Keith point shot.

There was a scary situation late in the third when Oilers forward Zack Kassian hit his head on the ice with his helmet popped off after a fight with Zack MacEwan. Kassian laid motionless for a while, but was later able to head to the dressing room on his feet, albeit with help.

Oilers’ Kassian helped off ice after fight with Canucks’ MacEwen

Edmonton forward Zack Kassian goes hard to the ice during a fight with Vancouver forward Zack MacEwen. Kassian stays on the ice for some time then is assisted off. 2:45

It was the first of three consecutive games between the Oilers and Canucks. They will close out pre-season play on Saturday in Vancouver before facing each other again to start the regular season on Wednesday back in Edmonton.

Chair of Hockey Canada’s board of directors resigns
Canada goes unbeaten in preliminaries after 3-0 win over Sweden at Hlinka Gretzky Cup
What’s next for the NHL and the Metaverse?
Flames, Mangiapane reach 3-year, $17.4M deal
Greatest Montreal Canadien to Wear Each Jersey Number