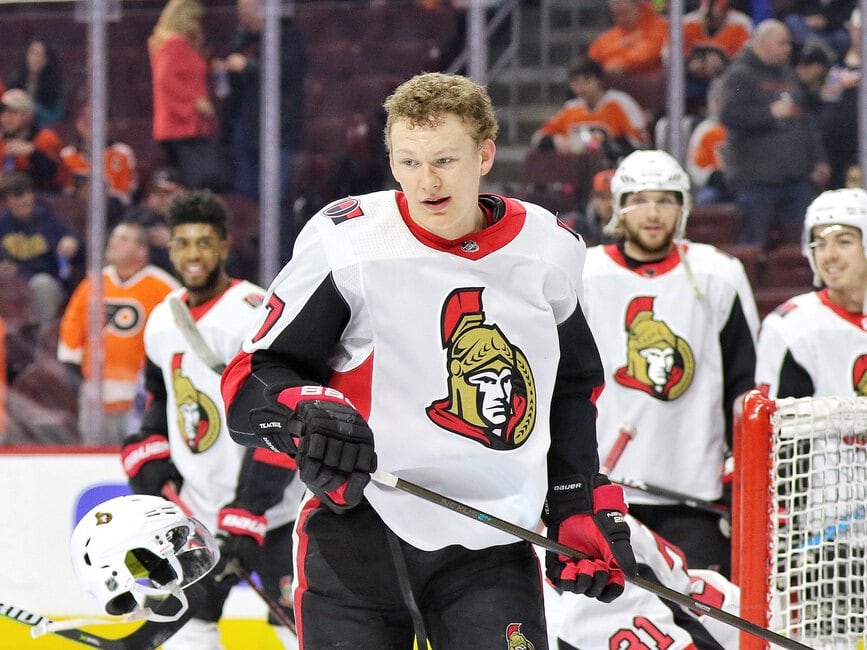 In this edition of Senators News & Rumours, Brady Tkachuk’s contract negotiations continue ad nauseam as Senators’ head coach D.J. Smith throws in the towel and says he now has to plan to start the season without the star left-winger. If that wasn’t bad enough, Colin White suffered a shoulder injury in Monday night’s game against the Toronto Maple Leafs that the coach says will keep him out of the lineup for months. With Clark Bishop injured the Senators are without two of five centres they thought they could count on and that has opened opportunities for younger players and veterans including Tyler Ennis.

Many Senators fans are irritated that talks on a new contract with Tkachuk have dragged on this long. At a press conference on Tuesday, Smith seemed to share that sentiment saying, “we’re at the point now where we only have two exhibition games left so I’ve got to start preparing like he’s not going to be here. So that changes things. He’s obviously a huge piece to our team. But that’s not my job. My job is to coach the guys that are here. When he gets here, I’ll coach him.”

Not a peep has been heard from either the Tkachuk camp or the Senators on where talks stand on a new contract. Elliotte Friedman speaking on Sportsnet’s Jeff Marek Show said, “I think the Ottawa Senators want to sign Brady Tkachuk for term, 7-8 yrs, and I think Brady Tkachuk has decided that he wants the bridge . . .” He went on to explain that Tkachuk probably believes the salary cap will increase substantially in a few years and a shorter term will allow him to cash in on that.

I have heard a lot of speculation that Tkachuk wants a shorter term to allow him to leave the capital if he sees the Senators’ commitment to building a winner here softens. Other commentators reckon he wants to play with his brother Matthew. In my view, all of this is pure hogwash.

Everything I have seen from Brady and the Tkachuk clan tells me they are all business. For them, negotiations with the Senators are about extracting the most money possible from the Senators and positioning the young star to do that over the long term. That could mean a series of shorter-term contracts in the current flat-cap era.

Negotiations are tough because the Flames are dealing with a member of the notoriously hard-nosed Tkachuk family. His father Keith sat out after his contract talks stalled with the Phoenix Coyotes in 1998, and his brother is dragging out negotiations on his new contract with the Calgary Flames.

The Senators will be hard-pressed to ice a competitive team without Tkachuk. The 22-year old scored 17 goals and tallied 19 assists in 56 games last season. In 198 career NHL games, he has notched 60 goals and 65 assists and led the team in points in the last two seasons. Not only that, he is the heart and soul of the team. In starting the season without him, the Senators risk getting off to a slow start and digging a hole for themselves from which they’ll have difficulty digging out. Think back to their start last season.

While the Senators are rumoured to want an eight-year deal with Tkachuk he wouldn’t be the first young gun in Ottawa to sign a shorter bridge deal. Daniel Alfredsson never signed more than a five-year contract while the longest contract Chris Phillips signed was for four years. Both spent their careers in Ottawa.

Not only that, but long-term deals may not guarantee franchises very much. The team signed seven-year deals with Jason Spezza, Erik Karlsson and Bobby Ryan only to see Spezza request a trade, Karlsson shipped off to San Jose and Ryan bought out. (from “Mendes: Why a Senators’ bridge deal for Brady Tkachuk Isn’t as Bad as You Think”, The Athletic, 06/10/2021)

Senators owner Eugene Melnyk opined in a May interview on the Bob McCown Podcast that “you can’t have a captain on a bridge deal”. If that’s the case then there are other sweaters on which the Senators can pin a C, but they need to get Tkachuk signed without further delay.

White was injured in Monday night’s game against the Leafs following a pile-up with David Kampf. The Senators announced Thursday that the young American centreman drafted in 2015, who notched 10 goals and eight assists last year, will be out of the lineup for four to six months. That is a major setback for the Senators.

With centreman Bishop also injured, the team is now very thin down the middle. The Senators had no luck in signing a big-name forward this summer and will need to scramble to shore up their offense. Chris Tierney, Josh Norris and Shane Pinto are pegged as the team’s top three centres but another centre is needed badly to round out the fourth line.

All of this could open up some opportunities for younger players or even breathe new life into the careers of several veterans as the team mixes and matches to cover its weakness down the middle. A case in point is Ennis, who had been a long-shot to make the team but was signed Thursday to a one-year, $900,000 contract.

At 32-years old with 642 games over 12 seasons under his belt, Ennis came into camp hoping to earn a spot on the Senators’ roster on a professional tryout contract (PTO). He earned Smith’s confidence with the head coach saying on Wednesday that, “you’re always wondering when a guy is 31 or 32 years old, are his legs still there? That was the only question coming into camp for me, where are his legs at? And his legs are fine”. Smith went on to say, “he’s a confidence player and when he has it, (the puck) he makes all kinds of plays. And he’s as good as anyone we have in the offensive zone” (from “Senators lose injured Colin White 4-6 months, sign Tyler Ennis to 1-year deal”, The Athletic, 07/10/2021).

Last Sunday and Monday, the Senators cut 13 players sending 11 down to the baby Sens in Belleville and two back to the Western Hockey League. None of the cuts came as a surprise since there weren’t really many spots open on the team at the beginning of training camp.

Related: 5 Ottawa Senators Prospects Who Could Crack NHL Lineup in 2021-22

Still, a few of the youngsters cut will be disappointed, including Egor Sokolov and Lassi Thomson, both of whom had very good camps. Many pundits believed that Sokolov had a shot at earning a spot on the big club’s roster. Even so, these two shouldn’t despair too much since injuries this season will likely mean they will be called back to the nation’s capital.

Shipped to the Belleville Senators:

Senators Get Set to Battle Leafs in Season Opener

The Senators are now down to 24 players and will likely send Filip Gustavsson down to Belleville to get to the maximum 23-player roster allowed by the league. The only question now is whether to go with eight defensemen and keep Eric Brannstrom in Ottawa. He impressed at camp and is competing with Victor Mete and Josh Brown for time on the blue line.

What fans see Saturday night will essentially be the team that welcomes the Leafs and hordes of their insufferable fans into the Canadian Tire Centre next Thursday night for the season opener. That should make for some entertaining hockey tomorrow night.

Paul covers the Calgary Flames, the Ottawa Senators and the OHL’s Ottawa 67s for The Hockey Writers (THW). He also hosts the Flames Faceoff show for THW’s Podcast Network.

Paul has been sought for media interviews for the thoughtful pieces he has written on hockey’s response to the major social and political issues of the day including the place of gay players in the game. Paul is also known for his interesting perspectives on the key issues and challenges facing the teams he follows.

Of his work with THW, Paul says,  “I love to tell stories about the game of hockey and the personalities – both past and present, who have made it the greatest game on the planet!”