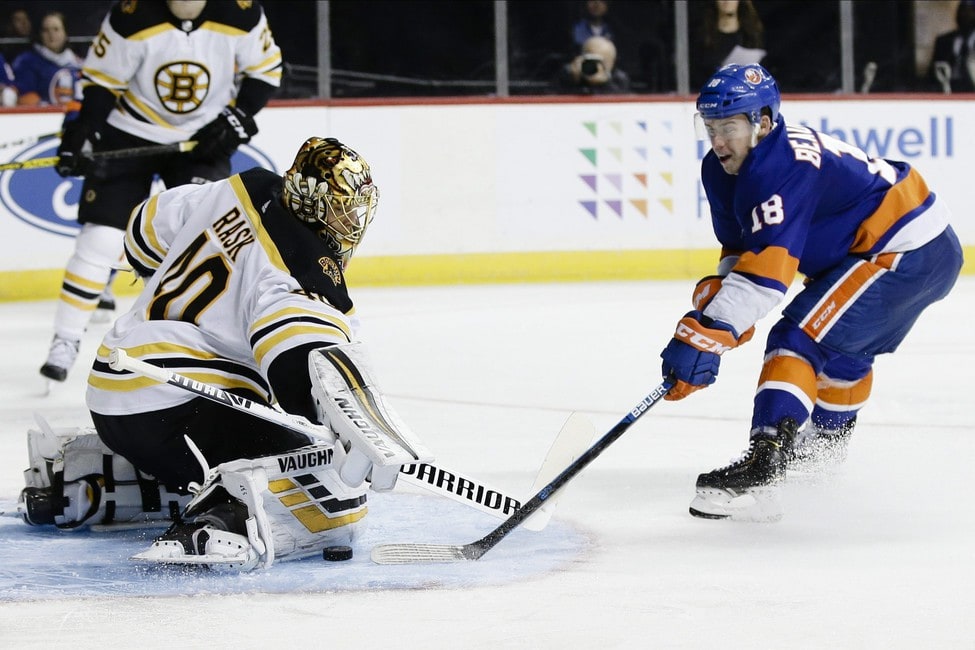 The New York Islanders have one of their deepest offensive lineups in years, even after losing Jordan Eberle to the Seattle Kraken in the expansion draft. Anders Lee’s return from injury, Zach Parise bolstering the third line, Kyle Palmieri’s long-term commitment, and Brock Nelson’s quiet and consistent play have the Islanders pointing in the right direction on offense. On defense, a lot of attention has been paid to the first pair of Ryan Pulock and Adam Pelech, along with newly signed veteran Zdeno Chara.

After looking at the additions, subtractions, and top players, who need to be great for the team, it’s Oliver Wahlstrom, Anthony Beauvillier, and Noah Dobson who are all not only poised for breakout seasons but could be the catalysts in the Islanders taking the next step.

It would be wrong to say Beauvillier lacks consistency or even the ability to grow season over season. During the last few campaigns, he’s shown what he’s capable of during long stretches, particularly during the Islanders’ trip to back-to-back conference finals. His overall game is generally pretty good, too, whether via the eye test or digging into the numbers, though neither are eye-popping. However, he seems to find himself at the right place at the right time, buying into and benefiting from head coach Barry Trotz’s system. And while it stunts offensive numbers at times, it’s proven to put players in a position to succeed.

But it’s clear Beauvillier has another gear, and he’ll be expected to reach it this season. The former 20-goal scorer, albeit under former head coach Doug Weight, can be a difference-maker behind Mathew Barzal, Anders Lee, and Kyle Palmieri. His speed and hockey IQ are huge assets, but there are stretches when he’s unable to find the back of the net, an issue he seems to solve under the pressure of the playoffs. But even there, if he can find a way to advance his game and reach another milestone, the Islanders won’t have any problem reaching the Stanley Cup Final.

Islander fans crossed their fingers during the summer of 2021, hoping and wishing general manager Lou Lamoriello would snag a big fish to take the offense up a notch. Rumors around St. Louis Blues’ forward Vladimir Tarasenko disappeared as quickly as they began, and a tight-lipped Lamoriello didn’t make a peep for months as he presumably figured out his plan. As it turned out, he simply stuck to his guns, bringing back largely the same offensive group with a few tweaks. One of those changes will be giving Wahlstrom regular minutes alongside J.G. Pageau and Parise.

Wahlstrom is a rare Islander with a shoot-first mentality. Few other forwards will or have the ability to shoot the puck like he can off the rush. During the 2020-21 season, he scored at a 20-plus goal pace, a feat not only for a rookie but a young player on a team with Trotz and Lamoriello calling the shots. This season, management and the coaching staff are confident Wahlstrom can be part of the Islanders’ team-first offense and become the goal-scorer fans were hoping to get this offseason. Early in the 2021 preseason, Trotz mentioned Wahlstrom wasn’t having the best camp. It looks as if he ended the preseason on a good note, and fans hope that means there are more good things to come from the Islanders’ sniper.

The back-end changed yet again this offseason. During the summer of 2020, the Islanders said goodbye to Devon Toews, shipping him to the Colorado Avalanche to clear cap space. This summer, it was another offensive-defenseman in Nick Leddy, who was sent to the Detroit Red Wings for mostly the same reason. That means all eyes are on Noah Dobson to help spark the offense from the back-end. Luckily, he has a nose for the net, but can he take his game to the next level?

Dobson showed a lot of potential last season despite playing largely sheltered minutes beside Andy Greene. This season, however, Dobson is alongside a new partner – Chara. Known for mentoring Charlie McAvoy and turning him into a huge part of the Boston Bruins’ defense with consistent offensive numbers, Chara will be asked to help Dobson reach his potential and, frankly, fill a huge hole left by Leddy. Trotz and Lamoriello have been careful with Dobson, but this season, it looks like the training wheels are off, and it’s up to him to prove he can be what the team needs.

The Islanders showed over the last three years they’re the real deal. This season, however, feels different; they need Dobson, Wahlstrom, and Beauvillier to step up in order for the Islanders to remain at the top of the league. They have the ability and talent to make it happen, and though they may not look perfect now, the hope is they hit their stride as early as possible during their 13-game road trip to start the season.

Jon Zella is a 30-year-old Long Island native currently living in Syracuse, NY. Outside of hockey, he enjoys motorcycles, beer, coffee, and his dog Olive.