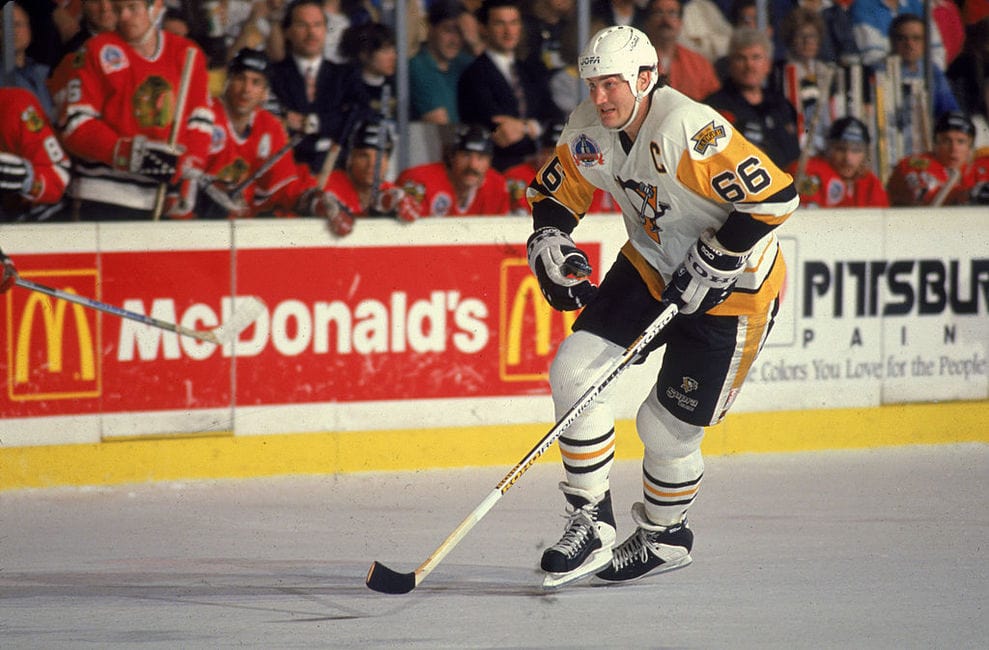 Oct. 11 has been a very busy day in National Hockey League history, with the expansion era officially began in 1967. Plus, there were memorable moments and milestones by some of the legendary names of the game. It’s time for our daily trip back through the years to relive all the best this date has given us.

When the Pittsburgh Penguins took the ice at the old Boston Garden on Oct. 11, 1984, their franchise was changed forever. The first overall pick of the 1984 NHL Entry Draft put his No. 66 sweater on for the first time and made an immediate impression.

Lemieux eventually added two assists in the game as the Penguins built up a 3-1 lead. However, Bourque got the last laugh as he scored the game-winning goal in a Boston Bruins 4-3 come-from-behind victory.

Four years later, on Oct. 11, 1988, Lemieux picked up his first five points of the 1988-89 season with three goals and two assists in the Penguins’ 8-7 win over the Washington Capitals. This was the 13th hat trick of his career.

On Oct. 11, 1924, the Bruins and Montreal Maroons each paid $15,000 for the rights to be granted an NHL franchise. The Bruins were the first team from the United States to play in the league, and they quickly named Art Ross as their first general manager.

The Toronto Maple Leafs acquired King Clancy on Oct. 11, 1930, from the Ottawa Senators for Art Smith, Eric Pettinger, and $35,000. This was the most money ever involved in an NHL trade up to this point. The defenseman played the next seven seasons with the Maple Leafs, scoring 52 goals and 130 points. He won the third Stanley Cup of his career in 1932.

Goaltender Terry Sawchuk earned the 13th shutout of his career on Oct. 11, 1951, by beating the Bruins 1-0. The victory extended the Detroit Red Wings’ unbeaten streak on opening night to 12 straight games. Since 1940, they had gone 11-0-1 in their first game of the season.

The Montreal Canadiens defeated the Red Wings 2-1 at the Forum, on Oct. 11, 1952, in the first hockey game televised on CBC.

On Oct. 11, 1953, Dave Gatherum became the seventh goaltender in NHL history to record a shutout in his first career game as the Red Wings won 3-0 over the visiting Maple Leafs. Gatherum played just three career NHL games allowing a total of three goals.

The Canadiens named Jean Beliveau team captain on Oct. 11, 1961. He replaced Doug Harvey, who was traded to the New York Rangers during the offseason. Harvey made his debut as player-coach for the Rangers on this night, and he scored a goal in a 6-2 victory at the Bruins.

The NHL’s expansion era officially began on Oct. 11, 1967, as five of the six teams joining the league made their debuts.

The Penguins hosted the Canadiens for their first-ever NHL game. Montreal scored a 2-1 win thanks to goals by Gilles Tremblay and Beliveau. Andy Bathgate scored the first goal in Penguins history early in the third period, but they could not get the equalizer against goaltender Rogie Vachon.

In their NHL debuts, the Minnesota North Stars and St. Louis Blues tied 2-2 at the St. Louis Arena. Bill Masterton scored the game’s first goal on the power play, the first in North Stars history. Larry Keenan answered by becoming the first player in a Blues’ sweater to light the lamp.

The Oakland Seals hosted the Philadelphia Flyers in both teams’ first NHL game. The Seals got two goals and an assist from Bill Hicke, who led the team with 21 goals that season, in a 5-1 win. Defenseman Kent Douglas scored the first goal in Seals’ history. The Flyers’ first-ever goal was scored midway through the second period by Bill Sutherland while on the power play.

A Big Date in Flyers History

On Oct. 11, 1973, Kate Smith made her first live appearance at the Spectrum, before the Flyers 2-0 win over the Maple Leafs. Philadelphia already had a 29-3-1 when they played a tap of Smith singing “God Bless America.” The shutout was the first of 12 during the 1973-74 season for Bernie Parent.

Speaking of Parent, his No. 1 was retired on this date in 1979, just prior to the Flyers’ 5-2 victory over the New York Islanders. Rookie Brian Propp scored his first NHL goal as Philadelphia began a team-record 26-game home unbeaten streak (19 wins, seven ties). Propp finished his career in Philadelphia with 369 goals, the second-most in team history.

Ilkka Sinisalo became just the third player in NHL history to score his first career goal on a penalty shot on Oct. 11, 1981, when he beat Paul Harrison. The goal was part of an offensive outburst during an 8-2 win over the rival Penguins.

On Oct. 11, 1990, the Flyers retired Bill Barber’s No. 7 in a pregame ceremony. Barber is still the franchise’s all-time leading goal-scorer with 420. Philadelphia appropriately scored seven goals that night, beating the visiting the New Jersey Devils 7-4.

Finally, on Oct. 11, 1997, John LeClair scored his seventh career hat trick and added two assists in a 6-2 win over his former team, the Canadiens.

In Boston, Bourque scored a goal and added an assist in his NHL debut, a 4-0 win over the Winnipeg Jets. He finished the season with 17 goals and 65 points and won the Calder Trophy for being the rookie of the year. The shutout was the 18th and final one of goaltender Gilles Gilbert’s career.

Defenseman Craig Hartsburg, who was selected by the North Stars two picks ahead of Bourque at the 1979 NHL Entry Draft, also played in his first game. He had two assists in Minnesota’s 4-1 win over the Hartford Whalers.

The Whalers played in their first NHL game after coming over from the World Hockey Association (WHA). In their lineup was the legendary Gordie Howe, who retired from the NHL in 1971. He became the first player in league history to ever play in a game after being inducted into the Hockey Hall of Fame.

The Habs’ former coach, Scotty Bowman, made his coaching debut for the Buffalo Sabres on this night. Future Sabres’ head coach Lindy Ruff scored a goal in his first NHL game as the Sabres beat the Washington Capitals 6-3.

Rookie Bryan Trottier had a huge night for the Islanders, on Oct. 11, 1975, in a 7-0 blowout of the Los Angeles Kings. Trottier scored the first three goals of his Hall of Fame career and added two assists.

On that same night, Guy LaFleur of the Canadiens became the first player in NHL history to have at least three points in each of his team’s first three games of the season. He scored a goal and assisted on two others in the Habs’ 7-2 win over the Blues.

The Penguins named Jean Pronovost their new team captain, on Oct. 11, 1977, replacing Ron Schock. He was the fourth captain in team history and held the role for just one season.

On Oct. 11, 1980, Chicago Blackhawks rookie Denis Savard scored his first NHL goal in a 5-4 win in Montreal. This was the first of 473 goals of his Hall of Fame career.

Four years later, on Oct. 11, 1984, Eddie Olczyk made his NHL debut with the Blackhawks. He scored his first career goal in front of his hometown fans in a 7-3 win over the visiting Red Wings.

Staying in Chicago, Jeremy Roenick scored the first hat trick of the 1990-91 season on Oct. 11, 1990, as the Blackhawks beat the Penguins 4-1. This was the second hat trick of his career. He scored 10 in total before he retired; six with the Blackhawks and four with the Phoenix Coyotes.

Wayne Gretzky was no stranger to scoring hat tricks. On Oct. 11, 1997, he scored the 50th of his legendary career, leading the Rangers to a 6-3 victory over the Vancouver Canucks. He also assisted on both of defenseman Bruce Driver’s two goals. This marked the 66th time he scored five or more points in an NHL game.

Scott Stevens dressed in his 600th game for the New Jersey Devils, on Oct. 11, 1999, in their 2-2 tie with the Ottawa Senators. After starting his career by playing 601 games for the Capitals, Stevens became the first player in NHL history to play 600 games for two different teams.

On Oct. 11, 2000, Luc Robitaille had a goal and an assist in the Kings’ 4-4 tie with the Blues. He joined Marcel Dionne and Dave Taylor as the only players to ever score 1,000 points in a Kings’ uniform.

Islanders head coach Peter Laviolette made NHL history on Oct. 11, 2001, when his team won 6-4 at the Devils. He became the first head coach ever to start his career with four straight road victories.

Martin Brodeur set an NHL record for most career games by a goalie who spent his entire career with one team on Oct. 11, 2003, when he appeared in his 667th game with the Devils. He broke the record set by Rangers’ Mike Richter.

Jaromir Jagr suited up for his ninth NHL team on Oct. 11, 2017, when he skated for the Calgary Flames in their 4-3 win at the Kings.

He played in just 22 games for the Flames during the 2017-18 season, scoring one goal and seven points.

A talented group of 21 current and former NHL players have been born on this date. Among those celebrating birthdays today are Jim Morrison (90), Shawn Chambers (55), Claude Lapointe (53), Jason Arnott (47), Justin Falk (33), and Alexis Lafreniere (20).