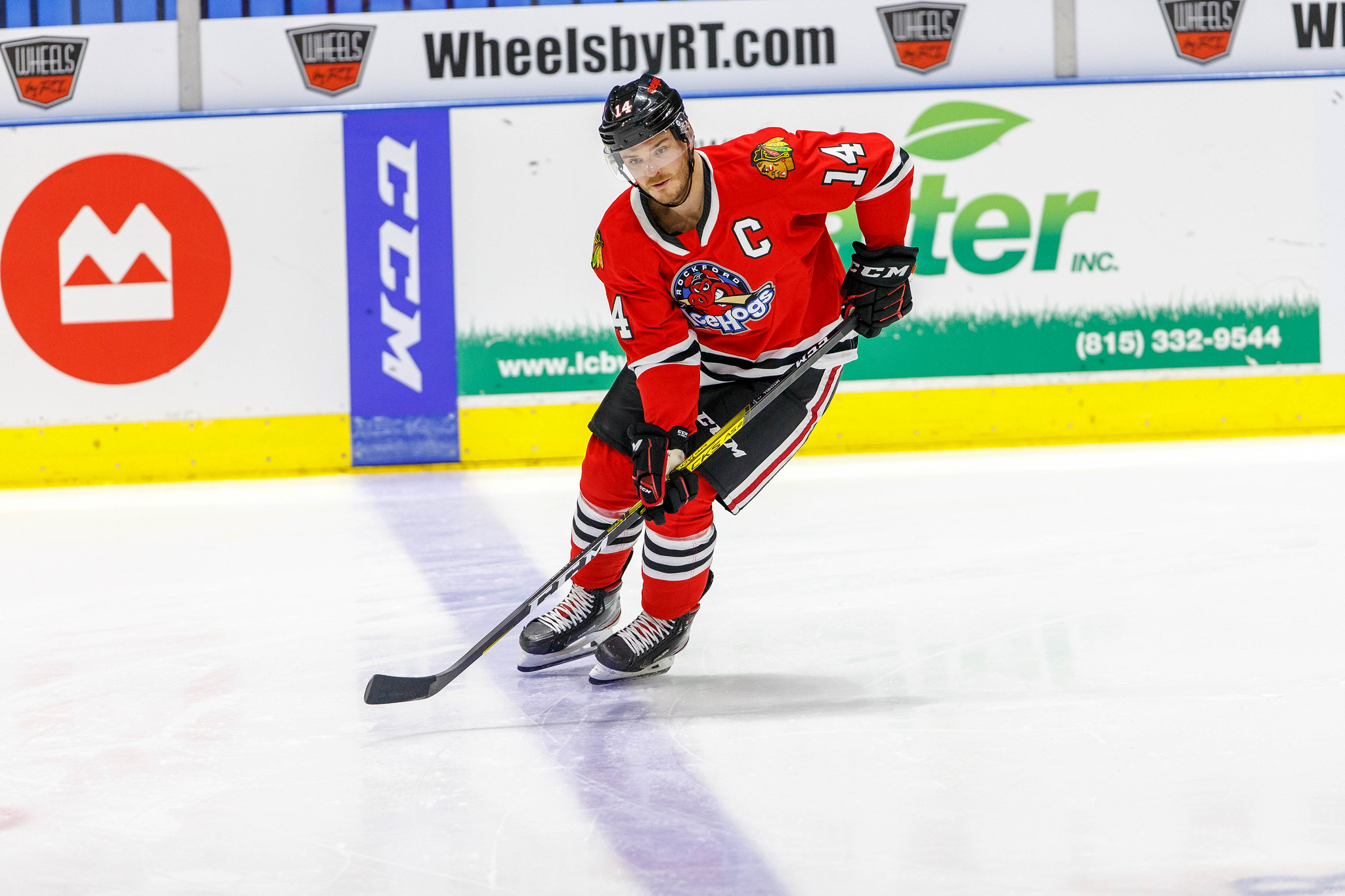 The American Hockey League (AHL) is dropping the puck on their 2021-22 season Friday night. Gone are the shortened schedules and taxi squads, as the league will play a full schedule with normal road trips and fans in the building. This season will also include a unique postseason format that will see 23 teams qualify for the Calder Cup Playoffs.

The Rockford IceHogs will begin their 23rd professional season tonight at the Grand Rapids Griffins before stopping in the Windy City Saturday night to take on the Chicago Wolves. Their opening night roster includes 18 players who played during the 2020-21 season. One of those returning players is last season’s captain Garret Mitchell, who will have an old friend on the team to help provide veteran leadership to the youngsters.

Mitchell & Stanton Know How to Win

Mitchell has been through the wars with 446 AHL games over 12 seasons. He wore the “C” on his sweater for the Hershey Bears during the 2015-16 season that saw them make it to the Calder Cup Finals before losing to the Lake Erie (now Cleveland) Monsters. One of his teammates on that squad was defenseman Ryan Stanton, who signed with the IceHogs during the offseason.

“When you have success, those are the teams you remember,” Mitchell said earlier this week. “We made a Calder Cup run but lost in the Finals to Cleveland. Stants was a huge part of that. When (IceHogs general manager) Mark Bernard called me over the summer to tell me that we signed Stants, I gave a quick fist pump. It’s always nice to have an older guy and a guy you have a good relationship with on your team.”

Stanton played just one season with the Bears, the AHL affiliate of the Washington Capitals, but he made a friend for life.

“Mitchie is awesome,” Stanton said with a smile. “I was pretty excited when I signed here and knew he was going to be back. He was the captain in Hershey when we went to the Finals. I’ve spent a lot of time with him over the last two weeks. He’s an awesome guy – I was over there for dinner the other night. Mitchie is a great leader and a key piece of the organization.”

Mitchell and Stanton are happy to be reunited in Rockford, but they both know they will play a pivotal role in the 2021-22 season. It’s not a role that gets you on the highlight reel or lands you a big endorsement deal, but it can make a huge difference in a young player’s career.

Leadership is Crucial for Development

The AHL is a unique league because there is a fine line between team success and developing for your NHL club. That is what makes covering it so intriguing. Every team enters the season wanting to win and hoist the Calder Cup in June. However, the main goal for each team is to get the next wave of talent ready to perform at the NHL level when they are called up.

Roster construction is fascinating as you need the right mix of veterans to help in both departments; winning and development. You need to find the right guys who can still produce on the ice but who have also accepted that their dreams of a long NHL career won’t come true and are willing to selflessly help the young players achieve theirs.

Mitchell and Stanton are precisely this kind of veteran, and they will provide more than just experience on the ice this season.

“There are so many little things you go through coming from college or juniors,” Mitchell said. “Whether you’re having to rent an apartment or set up utility bills. There are a ton of different things as a college or junior player you don’t have to deal with. The on-ice stuff, for me, I’ve always been that leader to my peers – guys the same age as me. I was thrown into that role as a pretty young player in Hershey, but I had great mentors to help me.

Stanton played three seasons for the IceHogs after the Chicago Blackhawks signed him as an undrafted free agent in 2010. At 32, he knows his role will be much different the second time around with the team.

“It’s something I had coming up through Rockford too,” he remembered. “You always look up to the older guys. You use them for guidance and see how they go about being a pro. It’s a position I’ve been in for the last four of five years here in the AHL. I’m used to the position, and I’m excited to get to know these young kids better. From what I have seen so far, there is certainly some skill and talent there. If there is anything I can do to help these kids move up to the next level and fulfill their dream of playing in the NHL, I am more than willing to do it.”

The duo will have some other NHL veterans to help provide leadership as the Blackhawks have recently sent Brett Connolly and Alex Nylander to start the season in the AHL.

“Those guys will take on a leadership role,” Mitchell said, “We’re excited for those guys to come down. Connelly and Nylander are huge additions for us.”

IceHogs Ready to Roll on the Road

Rockford struggled during the strange 2020-21 season, going 12-19-1-0 while having problems generating consistent offense. They have a good mix of youth and experience this season and should be a much better team.

One key to success this season could be that “normal” road trips are back. Last season, teams took the bus out to the game and returned home right after getting out of the shower. Real road trips with overnight stays and all that comes with them are back this season, and Mitchell feels that will be a big help.

“That’s probably the biggest thing I am looking forward to,” he admitted. “Maybe you have a couple of games where you’re on a skid. Five or 10 games where you’re struggling. That’s a great spot, as an older guy, to get everybody together to go do something and make sure everyone isn’t so tight. That’s one thing I am most excited about.

“It was obviously a weird year and a half. It’s nice to be able to see guys’ faces again and walk around the dressing room. I’m looking forward to going out on the road and being able to go out to dinners. To get to know guys at a personal level, especially for me, and helping them through certain situations.”

Mitchell and the IceHogs will get those old-fashioned road trips right off the bat. They will be spending their first three weeks of the season on the road as renovations are completed at the BMO Harris Bank Center. They will not play their first game on home ice until Nov. 6.

Trying to win while developing young talent is no easy task. You need to have selfless veterans who know how to win on the ice and be a pro off of it. The IceHogs have two of the best when it comes to this in Mitchell and Stanton, and the Blackhawks are hoping to reap the rewards.