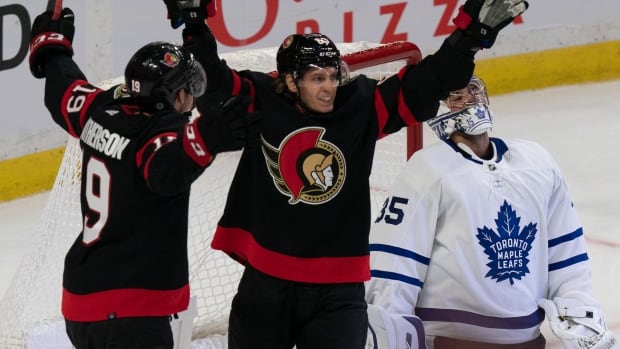 The Ottawa Senators couldn’t have asked for a better start to the regular season.

Not only did they beat the Toronto Maple Leafs 3-2 on Thursday, they signed Brady Tkachuk to a seven-year contract extension hours earlier.

Tyler Ennis led the way with a goal and an assist, while Chris Tierney and Alex Formenton also scored.

Anton Forsberg, who stopped a career-high 46 shots, got the start for the Senators (1-0-0) as Matt Murray is dealing with a bad cold.

Petr Mrazek got the start for the Leafs (1-1-0), but was replaced by Jack Campbell to start the third as he sustained a groin injury on the final play of the second period.

Toronto Maple Leafs goalie Petr Mrázek left Thursday nights game versus the Ottawa Senators after suffering a groin injury at the end of the second period and did not return. 0:53

Toronto opened its season Wednesday night with a 2-1 win over Montreal, but struggled to beat Forsberg until Jason Spezza, a former Ottawa captain, spearheaded the Leafs charge to finish the game with a goal and an assist, as did William Nylander.

Spezza made it 3-1 early in the third with a power-play goal as he beat Forsberg high, leading the goalie to throw his helmet down in frustration.

Senators open the season with a win against Maple Leafs

Toronto cut the lead to one, as Spezza made a perfect cross-ice pass to Nylander who beat Forsberg for a second power-play goal.

The Senators and their 15,159 fans caught a break when John Tavares was called for hooking Connor Brown in the final minute of play as he looked for the empty net.

Both teams had a number of chances through the second period, but neither were able to capitalize.

The Senators got off to a great start, and led 3-0 after the first period.

Nick Holden fired a puck at the net and it bounced in off Tierney all alone in front. Ennis made it 2-0 with a power-play goal as he tipped a Thomas Chabot point shot and Formenton wrapped things up with 0.6 seconds remaining as he fired a shot past Mrazek

One burning question for each Canadian NHL team

The 7 Canadian teams are no longer all in the same division, which leaves a lot of questions. Rob Pizzo breaks some of them down. 6:03