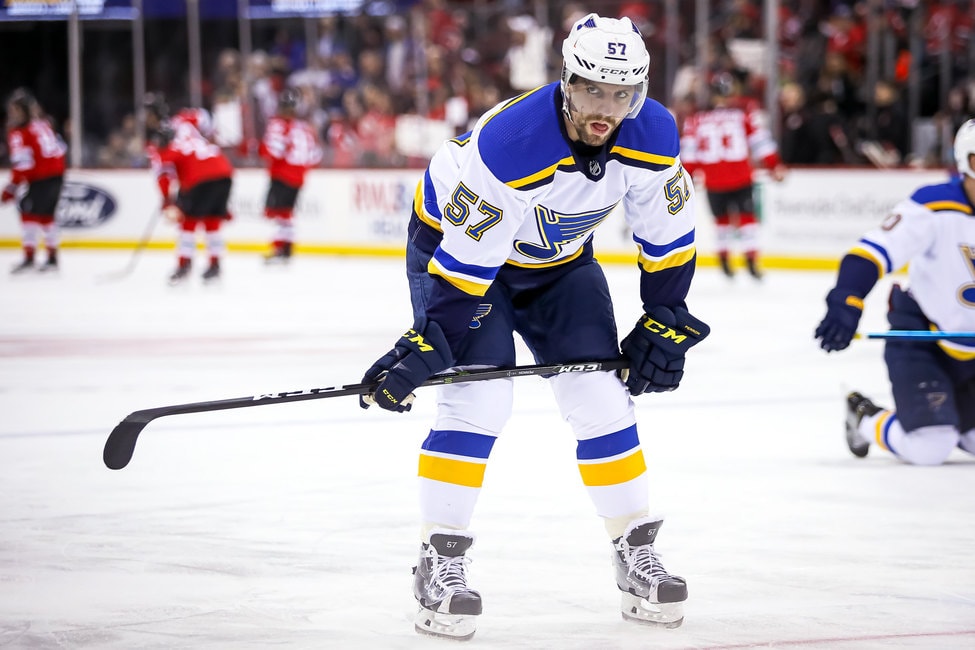 The St. Louis Blues began their 2021-22 season with the same result as the 2020-21 season, a win over the Colorado Avalanche. The score was 5-3 this time, with more scoring than last season’s opener. This was a typical Blues game, a rollercoaster of emotions from the drop of the puck.

The Blues found a way to get it done over a decimated Avalanche team, now they get into the groove of the first full season since 2018-19 with a win. This one started with a bang, as Brayden Schenn dropped the gloves with Avalanche Nazem Kadri, who was suspended for a brutal hit on Justin Faulk in the 2021 playoffs.

With four new additions to the forward group, you would think that it would take a month or so to find chemistry. But I don’t think that is the case here, the Blues forward lines looked good together. The top six stood out over the rest of the forwards, but overall they looked sharp.

Even though they slowed down after the first period and a half, there was promise with the newcomers added into the top six. Both of the big acquisitions, Pavel Buchnevich and Brandon Saad, had assists tonight.

The Blues’ top line of Saad, Ryan O’Reilly, and David Perron was effective, even with O’Reilly not having his best game. Perron was a game-time decision to play, but that didn’t matter as he scored not one, two goals against Darcy Kuemper. I liked the two-way ability of this line and think they can only grow from here, O’Reilly and Saad will be just fine.

The best line of the night for generating offense was Buchnevich with Schenn and Jordan Kyrou. I’m surprised that Buchnevich and Kyrou didn’t score goals. We saw Kyrou all over the ice in the first two periods, he tallied two assists and was driving play with his speed and skill. I’m already regretting my pick of Kyrou having a “down” season, he looked phenomenal tonight.

The bottom-six did have its struggles, we saw James Neal and Vladimir Tarasenko be ineffective and turn the puck over multiple times. Robert Thomas was solid, but there is definitely more there and he will get better.

I would like to shout Tyler Bozak and Ivan Barbashev out, they both played well. The overall two-way game by both of them was great, I also think that Jake Neighbours did his job, with throwing his body around and playing smart. Overall, the forward groups will get better and the Blues should feel confident in that, most of the forwards had good games tonight.

The way that the Blues played in the first period-and-a-half was like a brand new team from the last two seasons, and they looked tremendous. They played at a faster pace and played transition-style hockey moving the puck through all three zones, it was similar to how the Vegas Golden Knights play.

The Blues went away from this style while they were under siege for the final period-and-a-half, which made this a closer game than it likely should’ve been.

The Blues definitely activated the defense much better and played a much more mobile style tonight. Players like Faulk, Torey Krug, Colton Parayko and Jake Walman were all moving the puck well through the neutral zone, which led to quick scoring chances. I think that was part of what the Blues missed last season with Parayko playing injured.

The Blues need to continue playing this faster style, because it’s more fun to watch, and can help them score more goals than they likely should. We are going to see big seasons from Krug and Faulk if they continue to move the puck through the neutral zone like this, that suits their style to perfection.

Binnington allowed three goals on 32 shots faced, which is deceptive in comparison to how he played. He made a few gigantic saves on Mikko Ranatenen shots from the circle when the game was 3-1. The Blues being stuck in their own zone for most of the third period did him zero favors as well.

A lot of folks may look at this game and think that the Avalanche are somehow not a good team without Gabriel Landeskog and Nathan MacKinnon, but those folks would be wrong. While it hurts them in many ways, they still have some fantastic players on this team, Rantanen and Andre Burakovsky stood out tonight. Let’s not forget about the likes of Cale Makar and Samuel Girard on the back-end, they rack up assists like it’s nobody’s business.

I would give Binnington an above-average grade on this game, even though his save percentage (SV%) of .906 isn’t flashy. He looked like a motivated and confident netminder, the Blues are going to need that if they’re going to make any noise this season.

The Blues now continue this early season road trip with a game against the Arizona Coyotes, we’ll see if they continue to grow as a team and win more hockey games, it would certainly be a sight to see if they get off to a hot start.

I have been covering sports for nearly a decade. I started with FanSided as a Baseball Contributor. Now I am writing about the NHL and the St. Louis Blues for The Hockey Writers. I grew up in Central Illinois as a huge fan of every sport. Finally, I do various podcasting across all major platforms.

Wranglers sign Sutter, four others
6 Predictions for the 2022 World Junior Championship
Dave Feschuk: Proof linking head hits and CTE is a game changer. Just not in the NHL
Flyers’ 4th Line Roster Spots Will Be a Battle
Provincial federations demand answers from Hockey Canada ahead of payment deadline