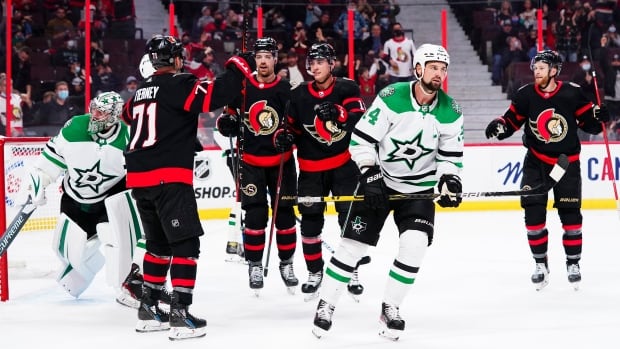 Chris Tierney scored twice to lead the Ottawa Senators to a 3-2 victory over the Dallas Stars Sunday night.

Filip Gustavsson made 32 saves in his first regular-season NHL game since May 12.

Michael Raffl and Joe Pavelski scored for the Stars (1-2-0).

Anton Khudobin, who stopped 24 shots, suffered his first regulation loss against the Senators. Coming in, the Stars netminder was 8-0-2 against Ottawa.

Tierney pots a pair to lead Sens past Stars

Chris Tierney’s second and third goals of the season pushed Ottawa to a 3-2 win over Dallas. 0:54

Trailing 3-1, the Stars pushed back in the third. Pavelski was able to pick up a loose puck in front off a Radek Faksa rebound to make things interesting, but couldn’t complete the comeback.

Ottawa scored two power-play goals in the second to take a 3-1 lead but finished the period without Tim Stutzle. He returned to start the third.

Tierney picked up his first of the night as a Shane Pinto shot deflected off his chest at 9:20 of the second, and with one minute remaining in the period he took a pass from Zach Sanford and pushed the puck towards the net to beat Khudobin.

Of concern was a slash to Stutzle’s left wrist by Faksa that went uncalled. The 19-year-old left the ice hunched over in pain clutching his wrist.

The two teams exchanged goals in the first to make it 1-1.

The Stars scored on their first shot as Raffl had room in front and buried a feed from Alexander Radulov. Less than a minute later Paul tucked a backhander under the crossbar.

This marked the first American-based opponent to visit Canadian Tire Centre since March 5, 2020.

Brady Tkachuk did not play Sunday, but will likely make his season debut Thursday for the Senators