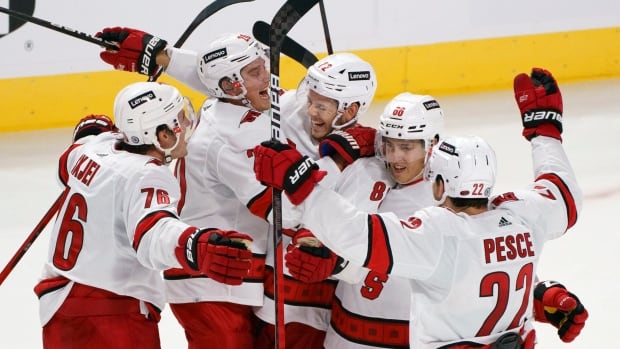 Jesperi Kotkaniemi made his return to Montreal a memorable one Thursday, scoring his first goal for Carolina as the Hurricanes topped the Canadiens 4-1.

Sebastian Aho had two goals and an assist for the ‘Canes, while Andrei Svechnikov also scored. Vincent Trocheck and Teuvo Teravainen each registered a pair of assists.

Tyler Toffoli had the lone goal for the Habs (0-5-0), who’ve lost five straight games to start the season.

Frederik Andersen had 27 saves for Carolina and Jake Allen stopped 29-of-32 shots for Montreal.

Thursday marked the much-anticipated return of Kotkaniemi — a longtime Montreal fan favourite — to the city that drafted him third overall in 2018. The 21-year-old Finnish centre signed a $6.1 million US offer sheet over the summer. Public opinion on Kotkaniemi has since soured as the Finn was booed every time he touched the ice, let alone the puck.

Habs fans boo Jesperi Kotkaniemi in his return to Montreal

Hurricanes forward Jesperi Kotkaniemi is booed by the Canadiens fans as he steps on the ice for the first time in Montreal since signing an offer sheet with Carolina during the off-season. 0:37

Just after the five-minute mark, Montreal’s Brendan Gallagher appeared to tip home Chris Wideman’s point shot on the power play, but the goal was called back for goaltender interference.

Montreal’s power play struggle continued as they couldn’t covert on any of six opportunities with the man advantage. It almost cost them when Kotkaniemi stepped out of the box and was immediately sprung on a breakaway, forcing a great glove stop by Allen.

With three minutes left in the opening frame, Kotkaniemi had the chance to give Carolina the lead, but saw his point-blank shot rejected once again by Allen, much to the Bell Centre’s delight.

The second period began with the Hurricanes on the power play and this time they made no mistake when Aho opened the scoring, putting away his first of the season.

Svechnikov doubled Carolina’s lead a minute and a half later with a cheeky finish into the top corner from a tight angle.

It took another 10 minutes before Montreal showed any signs of life. The door finally opened with two minutes left in the frame when Toffoli smacked home Montreal’s first power-play goal of the season.

With 10:37 to go in the third, Kotkaniemi’s return to Montreal was complete as he tipped in a shot from Brady Skjei, restoring Carolina’s two-goal lead.

WATCH | Kotkaniemi puts Hurricanes up 2 goals in return to Montreal:

Jesperi Kotkaniemi scores in his first game in Montreal since signing an offer sheet as Carolina wins 4-1. The Canadiens suffer their 5th straight loss to start the season. 0:55

The Hurricanes did have to stave a late Montreal push to equalize, with Andersen holding firm and denying multiple excellent scoring opportunities throughout the last five minutes.

An empty-net goal from Aho sealed the score at 4-1.

The Canadiens are back in action Saturday when they host the Detroit Red Wings. Carolina will travel to Columbus to take on the Blue Jackets the same day.