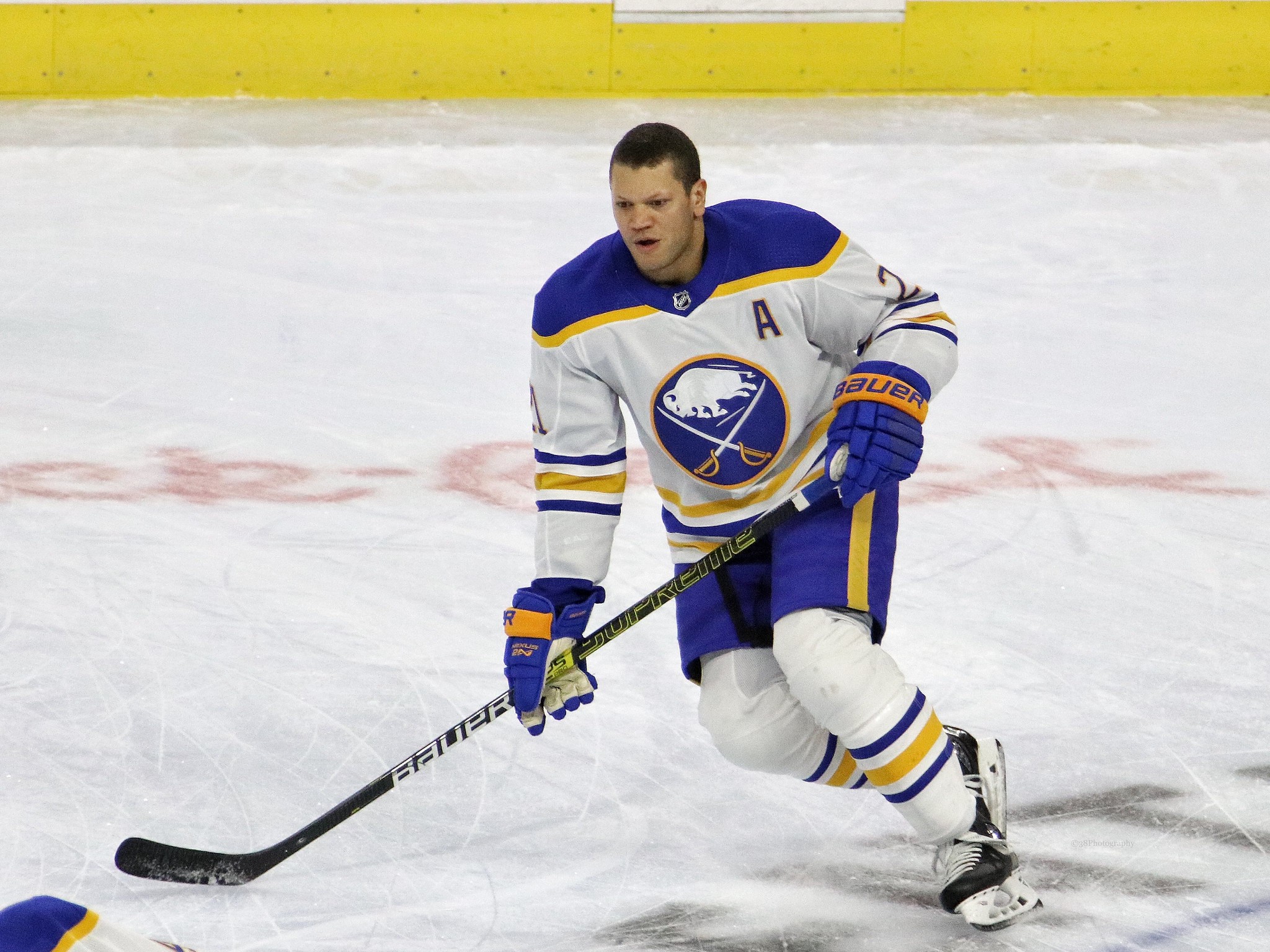 For the Buffalo Sabres, not many could have predicted Kyle Okposo and the fourth line to be the most productive unit to begin the season, but that is the case. The trio of Cody Eakin, Zemgus Girgensons, and Okposo has impressed so far and outplayed their competition at 5v5. It is unlikely that this will sustain moving forward, and John Hayden will now be slotted into Eakin’s place as he recovers from an undisclosed injury.

Besides his play at even strength, Okposo has also been effective at finding shooting lanes on the power-play and capitalizing on them. He looks like his former self from his playing days with the New York Islanders from 2007 to 2016, and if he can keep this up, it could be a career resurgence for him.

Let’s break down what he has done at both 5v5 and on the power play that has led to his scoring chances and the actual goals being scored.

Okposo Is Driving The Play 5v5

The three-game sample size is too short to evaluate a player, as any player in the NHL can perform for a limited stretch. However, it should be noted that the Sabres’ fourth line was generating the most expected goals during their game against the Vancouver Canucks. They were making plays off the cycle and could sustain pressure in the offensive zone for long periods. Tobias Reider was the only change on the fourth line since last season, but it appears that Girgensons is more valued than initially realized.

The common theme with both of his goals to start the season is utilizing his powerful wrist show. It hasn’t been weaponized by him the past few years, but it’s what made him the perfect linemate for John Tavares with the Islanders during his prime. When he’s able to create the space and find the shooting lane, the opposing team’s goaltenders are not prepared for how powerful his wrist shot is, and it showed throughout the first few games.

A Shooting Threat On The Power Play

There have been many positives about the team’s power play, such as Jacob Bryson being deceptive at the blue line and finding those passing lanes for his teammates. It also helps that Dylan Cozens is very strong at entering the offensive zone with possession and can skate a lap by himself. These factors have led to opposing teams underrating Okposo as he stands along the half wall on the right-hand side to receive the puck and have an open shooting lane.

Looking back at the first game against the Montreal Canadiens, this led to Okposo’s power-play goal. Cozens used his speed to skate through the neutral zone, and none of the Canadien defenders kept up with him. As he protected the puck behind the board, he spotted Colin Miller on the left side of the half-wall, and he made a quick pass to Bryson at the blue line. He waited for the extra second and passed it to Okposo, who winded up for his most powerful wrist shot since he joined the team in 2016. The play was executed perfectly, and that is because every player on the ice knew their role in the power play.

It awaits to be seen if the Sabre’s fourth line can keep up this level of production, but it’s impressive that they’re outplaying their opponents. Even if the goal-scoring is reduced, Okposo shows that he can be a valuable asset in multiple scenarios. Don’t be surprised if he breaks the 40 point barrier for the first time since the 2017-18 season if he can prove this isn’t a fluke.

Jordan Jacklin is a freelance writer who covers the Buffalo Sabres here at The Hockey Writers. Jordan is a student at Ryerson’s Sport Media program and uses analytics and video scouting to evaluate your favourite players in the game.

Sweden beats Austria 6-0 to improve to 2-0 in world junior
What Does a Successful Flyers Season Look Like in 2022-23?
Torey Krug lays huge hit on Robert Thomas in 3rd
England vs Australia | Women’s Hockey Finals | Birmingham 2022 | #B2022
A Tribute to Edmonton Oilers Superfan Ben Stelter