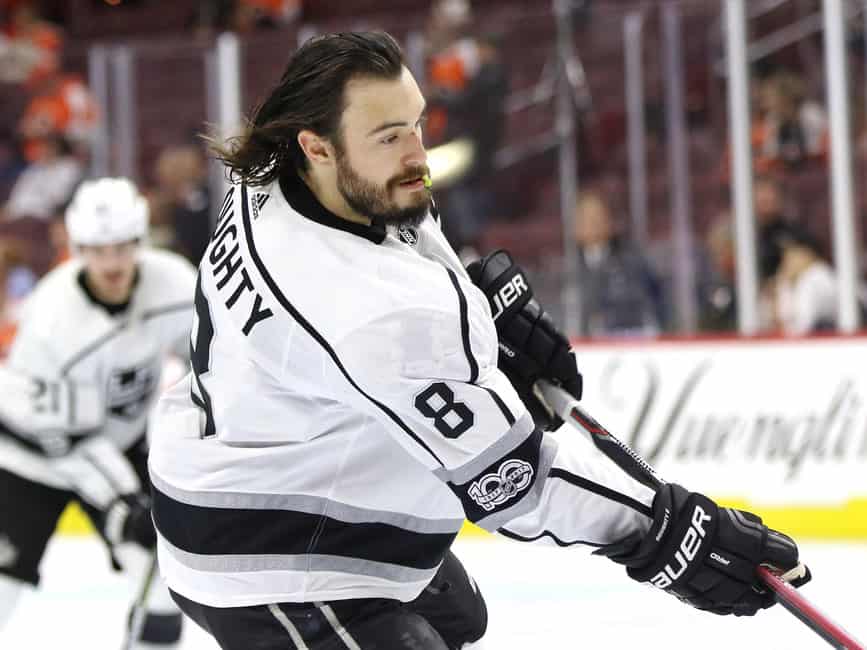 In this edition of Los Angeles Kings News & Rumors, I’ll be discussing the recent injury to Drew Doughty and how the team proceeds without him. I’ll also be discussing some line experimentation from coach Todd McLellan and the Ontario Reigns hot start to the American Hockey League (AHL) season.

Doughty’s Injury Against the Stars

Disaster struck when the Kings played the Dallas Stars on Oct. 22, as star defensemen Doughty was knocked out of the game during the second period. Doughty suffered a knee-on-knee collision when Stars defensemen Jani Hakanpaa stepped up to hit him at the blue line. Fortunately for Kings fans, it has been reported that the Kings defender escaped any ligament damage and the injury is just a minor knee sprain. This is great news for the team, as he should now only miss a few weeks instead of a few months.

With Doughty out, the Kings have recalled Austin Strand to the NHL roster. Strand was the final cut from training camp and played 13 games with the team last season. He’s a big defenseman who moves the puck well, two attributes that should help the team. Still, he’s far from Doughty, and we saw on Sunday against the St. Louis Blues how devastating losing a player of his caliber can be. Of course, the dismal performance isn’t just because he was missing, but considering the team’s huge struggles in special team situations, somewhere where he excels, his loss was certainly evident. I would expect there to be some shuffling of the power-play moving forward, as Matt Roy struggled on the first power-play unit, my guess would be Sean Walker filling in for the vet in the future. After a tough start to the season, losing their star defensemen is a huge blow for the Kings.

Many Kings fans were hoping and expecting, to see Hakanpaa receive some form of supplementary discipline after the hit on Doughty. Leaving many of them disappointed on Saturday when it was announced Hakanpaa would not have a hearing with the league about this hit.

The league decided that, because Hakanpaa did not extend his knee out to make contact with Doughty, the play was not deserving of supplementary discipline. When the hit first happened, I thought Hakanpaa deserved punishment and thought the league would deliver. However, after the league’s announcement and a few days to let emotions settle, I understand why he was not disciplined. While there is an argument that he led with his knee on this hit, he certainly did not extend his leg to hit Doughty’s knee. It was a dangerous play, but not worth a suspension.

According to LA Kings Insider Zach Dooley, coach McLellan is experimenting with his lines for the game against the Blues on Monday. The forward lines have struggled to score, outside of Anze Kopitar’s line, so McLellan is making changes.

I’m particularly interested in two things. One is Rasmus Kupari back at center. He has spent his first four games at right wing this season, where he has impressed, but was drafted as a center and should be comfortable in this position. I’ve thought for a while that Kupari’s future is at wing, but his versatility is coming in handy here. I like the line he’s centering as well, it has a nice blend of qualities, with Trevor Moore performing the puck hunting role he excels at, Kupari adding speed and puck carrying ability, and Tkachev adding creativity and passing. This line doesn’t have a natural finisher, but Moore scored ten goals last season and might cash in on Kupari and Tkachev’s great creativity.

The other interesting piece of information is Arthur Kaliyev on a line with Alex Iafallo and Phillip Danault. I mentioned in a recent article that this line could have some huge success, as these three players complement each other well. Kaliyev is the organization’s best shooter, but he comes with deficiencies, mainly his lack of defensive ability and his poor forechecking. Fortunately, Iafallo and Danault excel in both of these areas, both players are two of the best defensive forwards in the league and are excellent forecheckers. As we’ve examined before, Danault is also one of the leagues most underrated playmakers, meaning Kaliyev will just have to find open spots in the offensive zone and finishes chances on this line. The Iafallo-Danault-Adrian Kempe line created a huge number of shots but struggled to finish their chances, adding Kaliyev should remove this issue and bring plenty of goals.

Reign Start the Season on Fire

After their 5-1 win over the San Diego Gulls on Oct. 23, the Reign moved up to first place in the pacific division. Expectations were high for the Reign heading into the season, with several highly rated prospects and a few AHL veterans on the roster, fans were expecting them to be one of the league’s best teams. They’re only five games into the season, but the early signs are promising as they have not lost a game yet. Some of the most impressive performers have been, reigning AHL MVP T.J. Tynan who leads the team in points, Alex Turcotte, Jacob Moverare, and Helge Grans. With their stellar play, several of the team’s prospects will be pushing for an NHL roster spot soon.