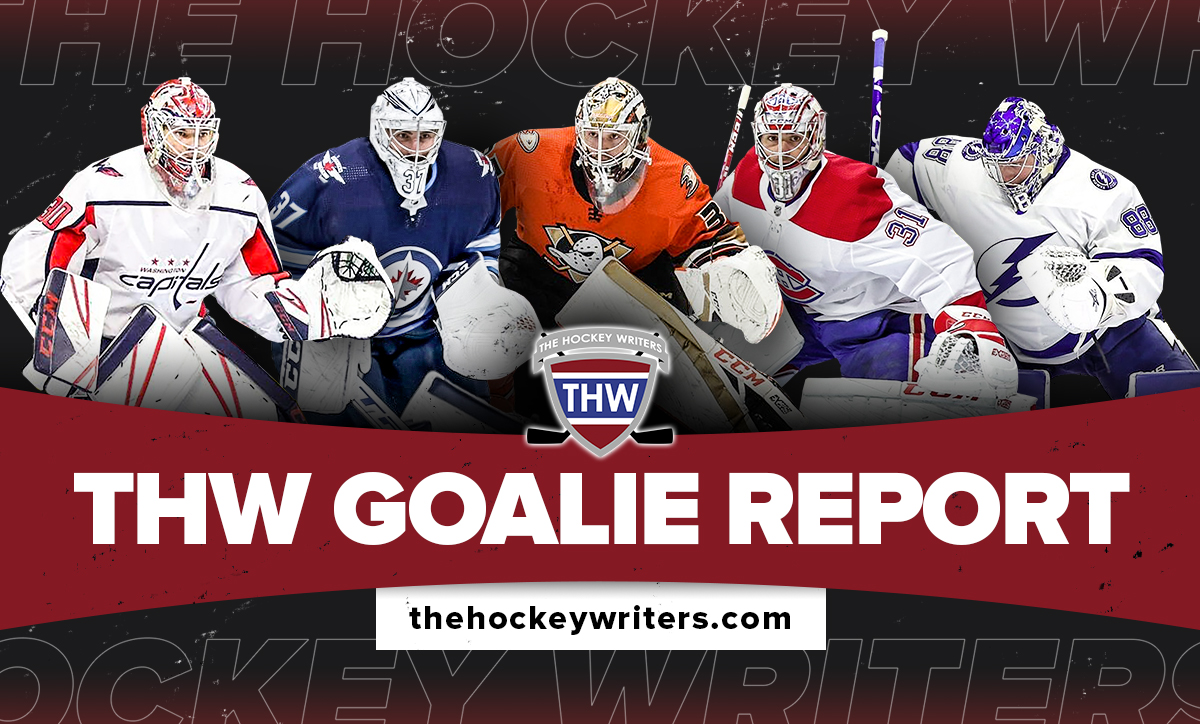 Even in these early days of the NHL’s 2021-22 schedule, goaltending narratives continue to prevail. Some positive, while others are far from it. Either way, it provides ample opportunity to discuss the position that matters the most within every roster.

Rather than questioning a stance that proclaims the importance of these specific athletes, just look to the organizations that are leading the way and those that are falling further behind. It’s not a coincidence that a team’s overall results directly align with the performances between their pipes.

These are the netminder notes, most worthy of exploration in this THW Goalie Report for the week of Oct. 19-Oct. 25.

After an active Week 2, here are the current NHL leaders in wins (W), goals-against average (GAA), save percentage (SV%), goals saved above expected (GSAx), and shutouts (SO).

Although these names are worthy of attention, the sample size computing their results is still too small to suggest that such success can sustain. Bear in mind, clubs haven’t even hit the 10-game mark, so there’s not yet a minimum number of starts required among those competing for the top spot in any respective category.

Anticipate drastic fluctuations, for at least a few more weeks.

Like this report, another weekly occurrence you can expect throughout the year is controversial calls – and the subsequent debates that follow – centred around the status of a questionable goal. It happens every season and it will continue to.

We’ve already witnessed a clear-cut case of this very confusion, when Brendan Gallagher thought he put the Montreal Canadiens up 1-0 early on in their tilt against the Carolina Hurricanes on Oct. 21. Shortly after his celebration, though, the mood shifted in Montreal.

Despite a rule being rather straightforward, subjective vantage points tend to skew an onlooker’s ability to see it that way. Case in point, this overturned goal. Gallagher was in the way of allowing Andersen the ability to perform his job. Simply stated, as per the reference point straight from the NHL’s own rulebook, it was goalie interference.

Goals should be disallowed only if: (1) an attacking player, either by his positioning or by contact, impairs the goalkeeper’s ability to move freely within his crease or defend his goal; or (2) an attacking player initiates more than incidental contact with a goalkeeper, inside or outside of his goal crease. Incidental contact with a goalkeeper will be permitted, and resulting goals allowed, when such contact is initiated outside of the goal crease, provided the attacking player has made a reasonable effort to avoid such contact.

While it’s understandable that Montreal fans were less than pleased with the outcome following this challenge, they need to re-direct that frustration. Had Gallagher positioned himself to screen Andersen in a manner that was permitted, this goal would have been allowed and could have easily changed the entire course of what ended up being a 4-1 loss.

Following a remarkable rookie season in 2018-19, leading the St. Louis Blues all the way towards hoisting the 2019 Stanley Cup, Jordan Binnington hasn’t quite returned to providing that level of impact. He’s earned modest numbers in the years since, but not to the same degree.

For instance, although his .910 SV% and 2.65 GAA were better than many throughout 2020-21, neither put him among the top-20 within those categories. Again, good results, just not the type of stats that suggest he was still playing at his peak. For Binnington to reverse the downward trend, he’d have to start strong from the outset with a new season upon him.

Winning his first two games of 2021-22 was a step in the right direction, but it was the workload Binnington managed while earning his third straight that deserves the headline. 42 saves against the Vegas Golden Knights on Oct. 20 is his highest such tally of the year thus far.

Allowing only one goal against that game, while achieving a .977 SV% and 2.71 GSAx are far from a fluke, as Binnington has made a habit of performing well against Vegas throughout his career – his four highest save counts are from facing the club. Needless to say, it’s a safe bet to back Binnington any time he’s up against the Golden Knights.

There are a variety of different reasons as to why a club would choose to pull from their prospect pool this early in any given season. It could be performance-related or simply out of necessity. The latter is currently the case for the New Jersey Devils, as both MacKenzie Blackwood and Jonathan Bernier are sidelined with injury.

Regardless of the rationale, Nico Daws surely wasn’t questioning the organization’s decision to call upon the 20-year-old for assistance against the Buffalo Sabres on Oct. 23.

Although it took New Jersey’s main tandem being unavailable to grant Daws his debut, it’s not that he hadn’t already proven capable. His time in the Ontario Hockey League (OHL) included a championship followed by a goaltender of the year award. Daws also won a gold medal at the 2020 IIHF World Junior Championship (WJC) with Team Canada. The former 84th overall pick simply hadn’t yet had a chance to showcase his skill set at a professional level.

Not only did Daws become the youngest goalie in Devils’ history to make their debut, but his efforts also helped them earn the extra point in overtime. A first impression that included 24 saves and a 0.96 GAA is evidence enough that he’s a reliable option for the club, moving forward. Whether they are forced to call on him or simply choose to.

Back in January 2021, before ever finding his way into NHL action, Connor Ingram voluntarily decided to take part in the player assistance program. Putting health before hockey is a victory in and of itself, regardless of how Ingram’s professional career ultimately unfolds.

Drafted back in 2016 by the Tampa Bay Lightning, Ingram’s experience since has been mostly limited to minor leagues across North America and overseas. Until Oct. 24, when he started his first-ever NHL contest.

Prioritizing his well-being was always going to bring about a type of unparalleled success in its own regard. Yet, there’s no denying the pride that an athlete must feel when they’ve finally reached their goal of playing in the pros. And Ingram did more than just make good on that dream.

Stopping 33 of 35 against a well-rounded Minnesota Wild club, Ingram helped hand them their only loss of the season to date. Whether or not this is a sign of things to come in Nashville’s net is yet to be seen. However, Ingram putting himself in a position to be ready for the opportunity by taking care of life outside of the rink is the more notable achievement. His story illustrates that good things happen when we focus on what matters most.

As a former first-round pick, Spencer Knight is expected to do big things in the NHL. A narrative that’s followed the 20-year-old since the 2019 NHL Entry Draft and was furthered with his impressive gold medal-winning performance at the 2021 WJC with Team USA.

Despite battling one of the biggest names in today’s game for playing time, with Bobrovsky as Florida’s go-to starter at the moment, that hasn’t stopped this prospect from finding his fit among the pros. So much so that he’s already making history.

Knight has only played a pair of contests thus far in the campaign, yet he’s certainly made them count with two straight wins. While his 30 save performance against the Lightning on Oct. 19 was more eventful than the 21 shots he faced against the Arizona Coyotes on Oct. 25, both concluded the right way for his Panthers.

To truly grasp how special Knight’s start to 2021-22 is, we have to look back to what he accomplished late in 2020-21. Knight is now one of only eight goalies in NHL history to win the first six regular-season appearances of their career. Certainly, a sign of things to come, even if it does end up taking Florida a few years to make sense of letting Knight take over more of the role.

Andersen Gets the Last Laugh

This past offseason, the Toronto Maple Leafs chose to let Andersen walk rather than work to re-sign him. There weren’t any dramatics that surrounded the situation, as it seems as mutual as this type of scenario could be. The athlete’s contract was up and the franchise wasn’t prepared to pay. Simple as that, really.

In what seemed more like a swap of starters than it actually was, the Carolina Hurricanes ended up signing Andersen in free agency shortly after the Maple Leafs acquired Petr Mrázek. Those who assumed that a season’s worth of results would be needed to determine which side came out on top in that comparison have already been proven wrong.

If it wasn’t unfortunate enough that Mrázek’s injury troubles followed him into Toronto, the Maple Leafs have also had to witness Andersen thrive as a Hurricane. A team that recently saw both parts of their dominant 2020-21 goaltending tandem depart, any questions surrounding Carolina’s net have been answered by Andersen’s impressive play.

Andersen stopping 24 of 25, combined with a GSAx of 1.54, against his former Toronto teammates on Oct. 25 helped keep Carolina’s perfect campaign intact. It also gave Andersen his league-leading fifth victory. Only one win away from tying his personal record of six straight to start a season, which occurred in both 2013-14 and 2014-15 when Andersen was in his mid-20s, the 32-year-old is out to prove that his best is yet to come.

What to Watch for Through Week 3

As has already been the case through the first couple of weeks of this season, goalies that had temporarily taken over the top spot in any respective regard have slipped out of it just as quickly. Less a reflection on their capabilities, it’s just the reality of how drastic the impact from any individual game can be when there is only a handful to reflect upon.

RELATED: Flames That Got Away: 3 Goalies Who Found Success Elsewhere

Netminders across the league will continue to add starts to their 2021-22 totals, but only the best among them will work their way to the top and stay there. For good measure, expect to see the elite mentioned in an upcoming THW Goalie Report.

Freelance thinker, paying too much attention to digital aesthetic. Oxford comma enthusiast. Spider-Man supporter. Sports fan, with two favourite hockey teams. If the Blackhawks and Maple Leafs ever meet in the Stanley Cup Final, you can find me wherever they’re playing that night.

Member of the Blackhawks Banter crew, as part of The Hockey Writers Live lineup.

Find me and more of my work at mralwayswrite.com.