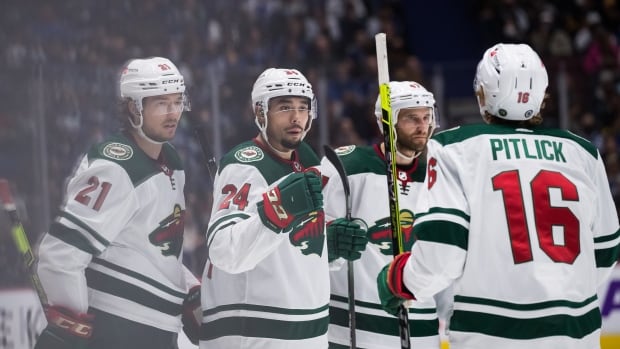 The Minnesota Wild knew it wasn’t going to be easy so they did everything they could to make it hard on the Vancouver Canucks.

The Wild played a close checking game and took advantage of a couple of turnovers to defeat the Canucks 3-2 Tuesday night, spoiling Vancouver’s NHL home-opening game.

Matt Dumba and Jonas Brodin both scored their first goals of the season and Rem Pitlick earned his first assist for the Wild (5-1-0).

Goaltender Cam Talbot made 22 saves as the Wild shook off a disappointing 5-2 loss to Nashville Sunday.

“It feels great,” said Talbot. “We talked about never losing two in a row. Coming into a tough building in their home-opener, obviously they’re going to have some momentum from the crowd.

“We established our game early, got out to a lead, which we haven’t been able to do this year, so I think that set the tone for the rest of the game.”

A crowd of 18,870 watched the Canucks play the first game with full capacity at Rogers Arena in 595 days.

The last time the Canucks played before a full house was in a 5-4 shootout win over the New York Islanders on March 10, 2020, two days before the NHL was put on pause due to COVID-19. The team played without fans in the stands during last year’s shorten season.

Talbot made a big stop off Vancouver’s Brock Boeser in the first period to keep the game 1-0.

“It builds momentum,” said Talbot, who is 5-0. “I’m just trying to go out there and make those big saves whenever I get an opportunity to.

Mats Zuccarello’s goal at 7:41 of the opening period was the first time this season Minnesota scored the game’s opening goal.

“We want to do that more often,” said Dumba. “That’s not the greatest recipe always chasing.”

Alex Chiasson, on a power play, and Bo Horvat scored for the Canucks (3-3-1), who saw a two-game win streak snapped. Thatcher Demko stopped 27 shots for Vancouver.

Horvat said it was like the Wild threw a blanket over the Canucks.

“It was a tight-checking game, it felt like a playoff game out there,” said Horvat. “They are kind of all over you, on top of you all the time.

“What killed us was a couple of turnovers. We have to be better than that.”

Horvat had the fans on their feet when he cut the Wild lead to one after fighting off a check from a Minnesota defenceman and scoring on a backhand at 15:53 of the third period.

“It was really refreshing to see everybody in the building,” he said. “When we gave them something to cheer about, they were cheering loud.”

Two of the Minnesota goals were a result of the Wilds pressure and pestering.

Dumba’s goal came after Boeser had taken a hard shot that went over the top of Minnesota’s net and around the boards. The Wild moved the puck up the ice and Dumba scored off a pass from Pitlick.

Early in the second period Vancouver defenceman Jack Rathbone coughed up the puck at his own blue line. Brodin fired a shot that Demko stopped, but then scored his first of the season on the rebound making the score 2-0.

“We didn’t create a lot, we didn’t capitalize on a couple that we would have liked to have,” said Canuck coach Travis Green.

Pitlick was playing his first game for the Wild since being claimed off waivers from Nashville on Oct. 5.

“It feels nice to contribute a little bit and get the win,” said the 24-year-old Ottawa native who played his college hockey at the University of Minnesota.

He came close to scoring on a breakaway in the second period after stepping out of the penalty box, but his shot hit the post.

“I was a little nervous on the bench in the penalty box,” he said. “It wasn’t the favourite part of my debut, but we got the W and that’s big.”