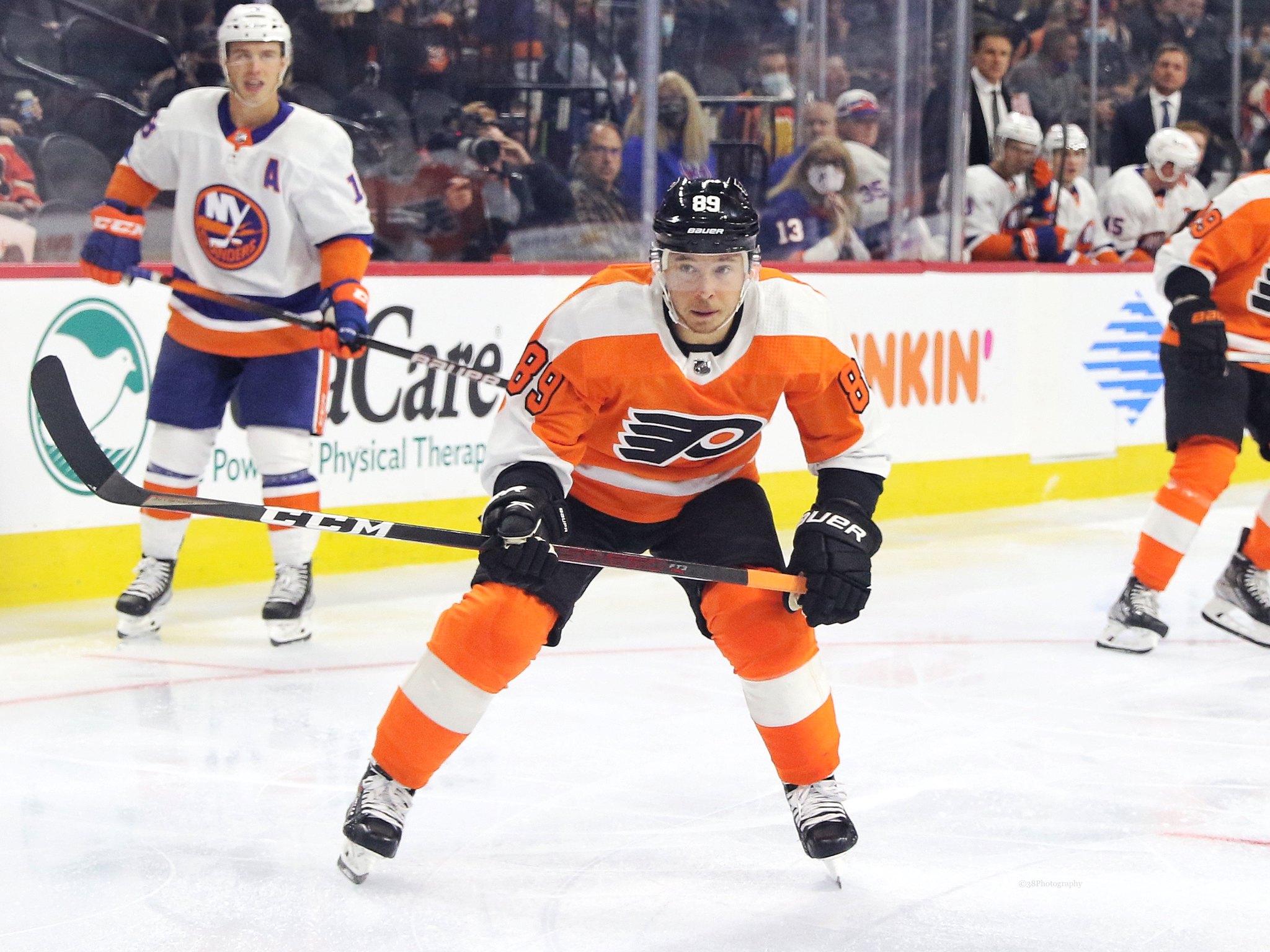 The trade was interesting on so many levels. Both players had down seasons for their standards. Both spent several seasons with their then current team. Each still had a lot to offer at this point in their careers albeit different things. Now each has a late-career change of scenery.

It’s still early in the 2021-22 season, but we thought it would be a good time to check the very early results on this one-for-one trade that will be looked at for several seasons to come. At this point, there’s just one conclusion that we can draw from this incomplete story.

Both the Blue Jackets and Flyers are benefiting from this trade and are getting exactly what they wanted out of it.

Let’s start with Voracek. The Blue Jackets dropped an interesting teaser video previewing their upcoming episode of Behind the Battle where GM Jarmo Kekalainen was heard saying that Voracek “changes the whole complexion of our team.” Then he had to make the call to Atkinson to advise of the trade.

This shows that the Blue Jackets were about making their team better despite any emotions they may have had towards a long-time player. They had a lot of shooters. But they didn’t have a lot of playmakers. In Voracek, the Blue Jackets knew they’d get someone who can dish the puck to their shooters.

So far, Voracek has come as advertised.

Despite not scoring a goal so far, Voracek has five assists including four on the power play. The Blue Jackets will enter Friday’s game with a conversion rate of 26.3% (5/19). This means Voracek has factored in on 80% of their power-play goals in the early going. That’ll do.

But it’s also the things you don’t see on the scoresheet for Voracek that is helping the Blue Jackets. On top of being one of their better playmakers, he can help get setup in the zone on the power play with good entries. Then once they’re setup, there is a threat at every spot. Patrik Laine, Oliver Bjorkstrand and Zach Werenski are impact players. But if you cover them, Boone Jenner is up front causing havoc. He has three power-play goals in six games.

Simply put, the Blue Jackets haven’t had a player like Voracek on their roster in recent memory. He is part of the reason why the team is off to a 4-2-0 start. At this point, he’s a better fit on the team given the other players on the roster. His ability to feed the shooters will keep the Blue Jackets in the race most of this season. Voracek is on an early 68-point pace. That’s a win in the early going.

On the other side, Atkinson has met and exceeded every expectation for the Flyers. He scored two goals Wednesday night including a buzzer beater to give his team the lead and the game winner in the third period.

Atkinson has six goals and seven points in his first five games. Unlike the Blue Jackets, the Flyers needed a shooter who wasn’t afraid to fire with the puck on his stick. It’s no wonder he has quickly become a fan favorite in Philadelphia.

The Flyers finally have someone who will shoot it when the fans yell SHOOOOOT. That’s a win in itself. But this is who Atkinson is. Despite being a smaller player, he’s always looking for his shot and will do it from distance or up close. He’s not afraid to go to the net. He can score in different ways.

Atkinson adds an element to an already good Flyers’ roster that was missing a shoot-first player. And he comes at a lesser cap charge than what Voracek was. The one thing they did get was one extra year of term.

By points percentage, the Flyers’ .700 ranks third in the Metro only behind Carolina (1.000) and Washington (.786). Atkinson has six of the team’s 23 goals. That’s called a great early return on the investment, especially when a player accounts for more than 25% of your goals.

While it is clear Atkinson has had a bigger impact in goals, each has had a positive impact on their new team so far. Both have factored in on more than 25% of their team’s goals (Atkinson seven points in 23 goals, Voracek five points in 19 goals) while providing a key element that was previously missing.

It will be interesting to see how this trade and story continue to develop. At this early stage however, it’s way too early to declare a definitive winner. Both teams are benefiting from their new player. From their perspective, that’s all you can ask for at this time.

I am a fully credentialed writer who covers the Columbus Blue Jackets, Cleveland Monsters and Erie Otters as well as the Ontario Hockey League and NHL Draft. The 2021-22 season will mark eight seasons with the Hockey Writers. I am also the site’s Credentials Manager.