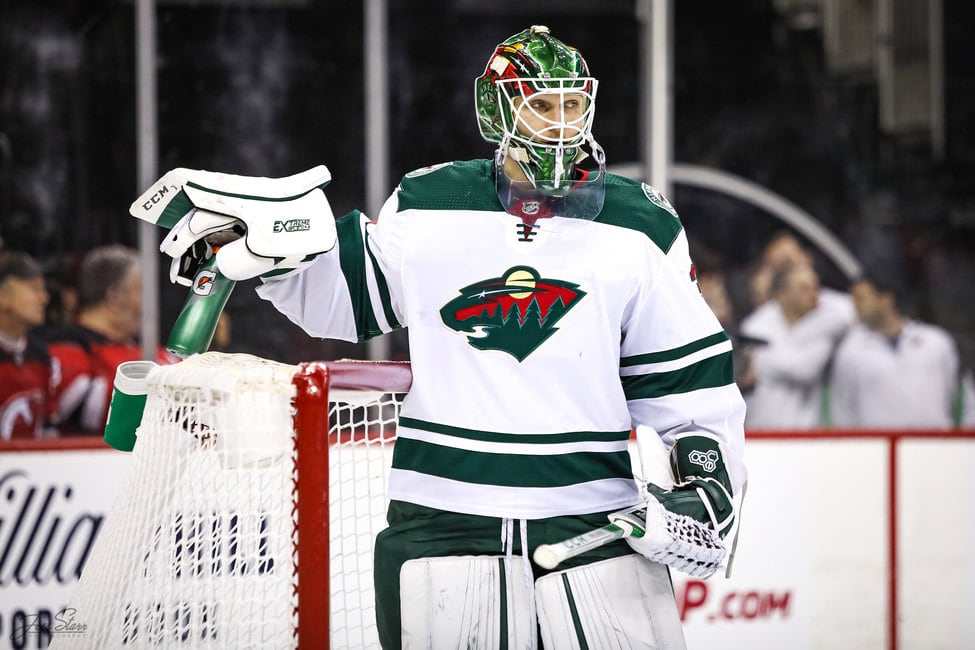 The Minnesota Wild have high aspirations for the 2021-22 season. Expectations were raised after a terrific 2020-21 campaign when they finished with a 35-16-5 record and a playoff berth. One of the biggest reasons for their success was their goaltenders, Cam Talbot and Kaapo Kähkönen. Talbot was fantastic, but when he needed a rest or went down with an injury early in the season, Kähkönen held down the fort.

Despite that it’s still early, Kähkönen’s importance to the team is already starting to show.

Kähkönen has only started one of the Wild’s first six games, and he struggled mightily, allowing five goals on 29 shots. To his credit, it was the worst the Wild have played as a whole this season, and it’s unfair to judge a player after just one game, so there’s no need to panic.

However, in 2020-21, Kähkönen’s performance declined as the season progressed. Early on, in February and March, he posted save percentages (SV%) above .927. Those are awe-inspiring stats for a young backup, and though no one expected him to maintain those numbers, he completely lost his game in the season’s final months. In April and early May combined, he posted a .854 SV% in six games. That’s a substantial drop-off.

To properly assess Kähkönen’s level of play right now, it likely isn’t as high as a .927 and isn’t as low as a .854. The Wild would love to see him around a .905 and .910; that would give the team a chance to win on most nights. Still, how he ended last season and started this one should be cause for some concern.

Talbot has started the rest of the Wild’s games and won five of them. He’s off to a terrific start, posting a .914 SV% and a 2.47 goals-against average, picking up right where he left off.

That all sounds great, and rightfully so, but he will need some rest from time to time, not just on the second half of a back-to-back. Talbot hasn’t played more than 40 games in a season since 2017-18 when he was with the Edmonton Oilers and played 67 games.

If healthy, Talbot will start more than 40 games this season, but can the Wild really ask him to start 60-65 games and be rested for the playoffs? They may not want to, but if Kähkönen continues to struggle, head coach Dean Evason might be forced to play Talbot that much. The hope is that Kähkönen can be trusted to start enough games to keep Talbot around the 55-60 game mark, allowing him to be at his best in the playoffs.

Outside of Kähkönen and Talbot, the Wild might not feel comfortable with the goaltenders in their system starting NHL games for a stretch. Andrew Hammond has had a decent start with the Iowa Wild, but he hasn’t played in the NHL since 2017-18 when he played in one game for the Colorado Avalanche. The season before that, he dressed in six games for the Ottawa Senators and posted an abysmal .837 SV%.

After Hammond, the Wild have two young goalies in Hunter Jones (21) and Déreck Baribeau (22). They are still young and lost some valuable development time due to the Covid-19 pandemic. They will likely only be called up if general manager Bill Guerin has absolutely no other option. The best thing for Jones and Baribeau is to continue developing in the minors. Their time will come, but not in 2021-22.

Jesper Wallstedt might be the goaltender of the future after he was drafted 20th overall in the 2021 NHL Entry Draft. However, he is still 18, turning 19 next month, making him years away from being NHL ready. He is the last player the Wild would want to rush into the NHL and risk hurting his long-term development.

There is always the option to trade; however, quality goaltenders aren’t the cheapest to acquire. A waiver claim at some point might be worth considering, but their choices will be few and far between.

Overall, many of the Wild’s concerning factors can be solved if Kähkönen can regain his confidence and play to the level of a solid NHL-backup or higher. He is the quiet X-factor if the team wants to improve on last season’s results.

Sports writer covering the Minnesota Wild. Graduated with a degree in sport media, also working with the Oshawa Generals of the OHL.