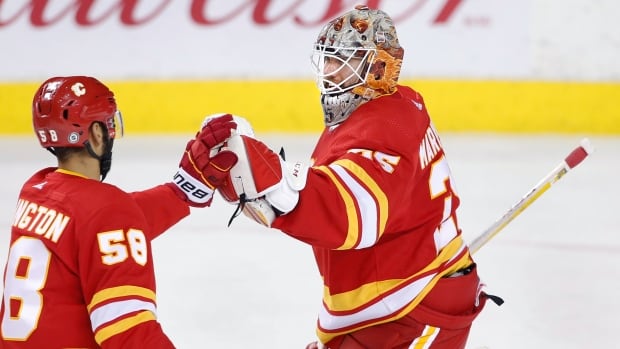 Sean Monahan scored his first goal of the season and added an assist Saturday night as the Calgary Flames, backstopped by Jacob Markstrom’s 20-save shutout, made it six wins in a row with a 4-0 victory over the Philadelphia Flyers.

The Flames were coming off a five-game Eastern road trip in which they never trailed and won all games by a combined score of 21-7.

While less busy than his 45-save shutout of the Penguins on Thursday — also a 4-0 victory for Calgary — Markstrom stopped all 20 shots faced for his third shutout in his last four starts. The 31-year-old Swede improved to 4-1-1 with a .957 save percentage.

Carter Hart made 32 saves for Philadelphia (4-2-1). Claude Giroux was held off the scoresheet for the first time this season, seeing his six-game point-streak snapped. The Flyers dropped the final game of their Western Canada road trip after picking up wins in Edmonton and Vancouver.

After a tight-checking, scoreless first period in which Calgary outshot Philadelphia 8-4, the Flames turned it up in the second and had the Flyers continuously trapped in their own end.

Johnny Gaudreau scored Calgary’s fourth and final goal in their 4-0 victory over Philadelphia on Saturday. 0:53

The relentless pressure led to the Flyers taking two minor penalties — both infractions drawn by Tkachuk — and the second one, an interference penalty on Rasmus Ristolainen, would prove costly with Monahan redirecting a perfect centring pass from Rasmus Andersson.

The goal at 9:07 came on the 12th consecutive shot to open the second period.

It was the first goal of the season for Monahan, the Flames’ third-highest paid player at $6.375 million US, who has spent most of the season centring the club’s fourth line.

Despite being dropped on the depth chart, he kept his spot on Calgary’s No. 1 power-play unit and it paid off. It was Monahan’s 62nd goal on the man advantage since entering the NHL in 2013, which is tied for 23rd over that span.

The score remained 1-0 until Tkachuk gave the Flames some insurance at 8:30 of the third period, making it 2-0 on Calgary’s second power-play goal of the night, neatly converting a slick tic-tac-toe passing sequence with Elias Lindholm and Monahan.

After Backlund scored into an empty net, Gaudreau added his second of the season with two minutes remaining, beating Hart inside the goal post.

It was a dominant performance defensively from the Flames, who continue to thrive in Darryl Sutter’s first full season back behind the bench.

The Flyers entered the game averaging more than four goals per game.