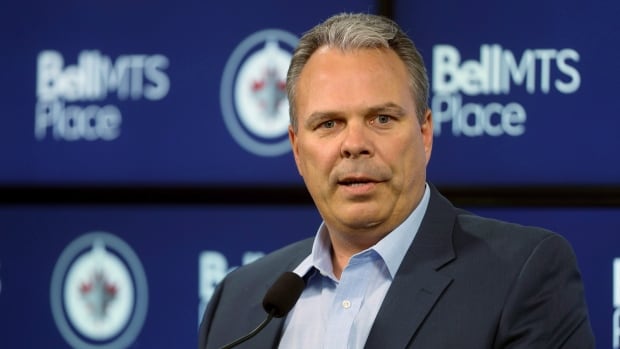 Kevin Cheveldayoff is expected to speak with members of the media today just days after the NHL said it won’t discipline the Winnipeg Jets general manager over his former team’s handling of sexual assault allegations against a former Chicago video coach.

Cheveldayoff and Jets executive chairman and governor Mark Chipman will take questions at 4 p.m. CT in Winnipeg, according to a news release sent out Tuesday by the organization.

Following a meeting between NHL commissioner Gary Bettman and Cheveldayoff on Friday, the league said its investigation found the Jets GM was “not responsible for improper decisions” made by Chicago management in connection with Brad Aldrich.

Cheveldayoff was an assistant GM for Chicago at the time.

Commissioned by the Chicago team in response to two lawsuits, a report found that the team failed to act for three weeks after leadership discussed the allegations at a meeting on May 23, 2010.

Cheveldayoff was Chicago’s assistant GM at the time. In its release, the NHL says his participation at the meeting was “extremely limited in scope and substance,” and noted that most people didn’t initially recall his presence.

The league says Cheveldayoff, who has been the GM of the Jets since the team relocated to Winnipeg from Atlanta in 2011, was the lowest-ranked official in the room and “essentially an observer to the discussion of possible next steps.”