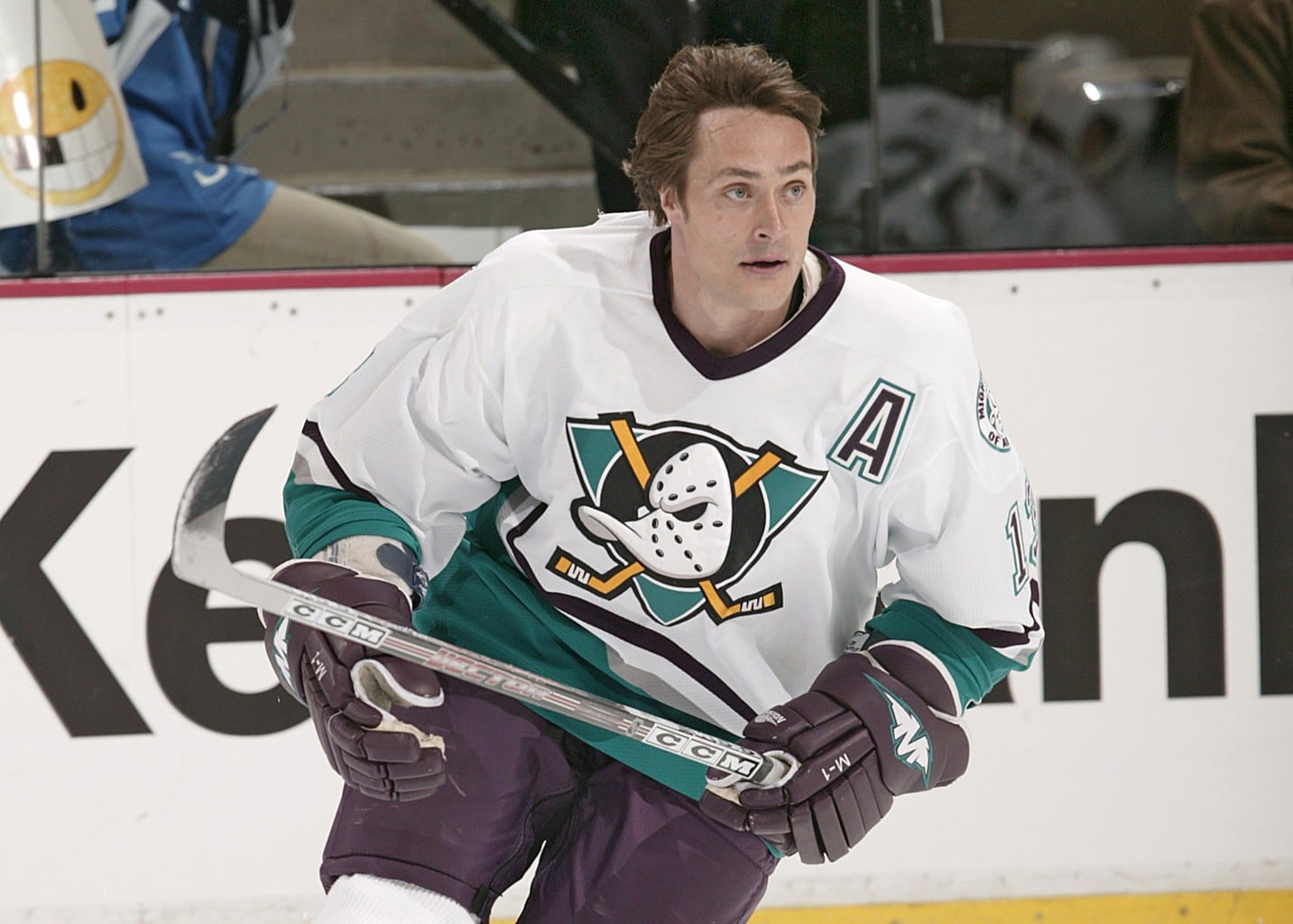 Ducks Fly Together. It’s a simple slogan that’s known to hockey fans and non-hockey fans alike. That group of rough-and-tumble kids from the Twin Cities that skated across the movie screen and into the hearts of people across the country in 1992 still leave a profound impact three decades later.

What’s left even more of an impact is that iconic Wild Wing logo, and the millions of merchandise items that it spawned upon its inception. That Mighty Ducks logo remains a popular figurehead in Anaheim Ducks lore, and has made frequent appearances into the team’s recent on-ice apparel.

The team’s mascot has been Wild Wing since the team’s introduction into the NHL. So it begs the question: why hasn’t the organization fully embraced it all and returned to its roots?

“Mighty Ducks” Copyright Not an Issue

The Ducks own the trademark to the Mighty Ducks logo and Wild Wing mask logo emblazoned with a pair of hockey sticks behind it. That much is obvious, given the increased population of related merchandise within the last several years.

The Ducks even debuted an alternate jersey in both 2015 and 2017 which displayed the Wild Wing mask logo front and center. The one in 2015–which is now the Ducks’ current alternate jersey—contained elements of both the past and present, combining their current orange with the inaugural Mighty Ducks logo. The one in 2017 followed a slightly different theme, a black base with teal accents.

A 20th anniversary jersey in 2013 also featured the Wild Wing mask logo, and the Ducks’ current reverse retro jersey—which debuted last season—features Wild Wing breaking out of the ice, a homage to the team’s alternate jersey during the 1995-96 season.

The Mighty Ducks Inspired a Generation

Another who is a fan of ”The Mighty Ducks,” and took great inspiration from them is A.J. Galante, former general manager of the now defunct Danbury Trashers, who played in the United Hockey League (UHL). In the Netflix documentary, “Untold: Crime and Penalties”, Galante said that watching “The Mighty Ducks” was his first exposure to ice hockey, and inspired him to begin playing as a kid. Eventually, this led to him and his father, James “Jimmy” Galante” creating their own hockey team and employing their own version of A.J.‘s hockey heros.

Another Ducks Rebrand Not That Simple

One obstacle that would be a viable reason for not channeling the early days of the Mighty Ducks is money. Henry and Susan Samueli, owners of the Ducks since their purchase from Disney in 2005, have spent a good amount of time and money trying to mold the team from being known first and foremost as “the team that came from Disney” to something of its own. Something more individualized and associated with winning and success than a cartoon mouse.

Commencing a rebrand less than 20 years after the previous one would require an ample amount of time and money, two things that the Samuelis have but likely aren’t willing to commit at this moment. Because of the pandemic and the team’s less than positive performance during most recent seasons, funds must be used efficiently. Each and every dollar must be spent with a purpose and cannot be thrown at a huge risk.

Sure, plenty of sales would be generated by the large number of merchandise that would surely be sold in the event that a rebrand is announced. But these are already a current occurrence with the smattering of Mighty Ducks apparel that they have churned out over the past few seasons.

The Samuelis are committed to the orange theme, which coincides with Orange County, where the Ducks reside. Incorporating a theme closer to home was something that they wanted to instill in the team, with #PaintItOrange being a phrase that has been used during the Ducks’ Stanley Cup Playoffs runs.

Though fans have been clamoring for a return to years of “The Pond” in terms of branding and the like, that doesn’t appear to be a likely scenario, at least not any time soon.

Derek has been a hockey fan for almost a decade and has been a sports fan in general for more than two decades.

He graduated from UCCS in Colorado Springs, CO in May 2020 with a bachelor’s degree in Sports Communication. He spent the last several years as part of UCCS’ on-campus student newspaper staff (both as a reporter and editor) and is now creating Ducks-related content from his home in Southern California.