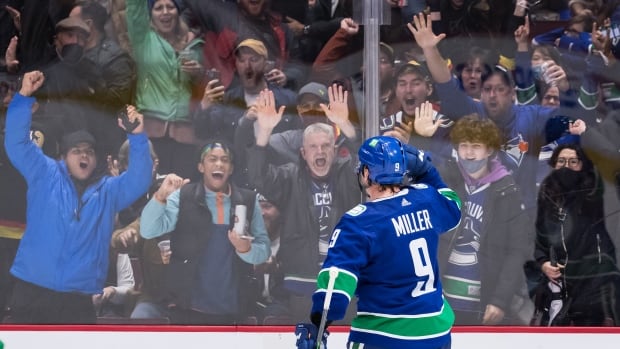 J.T. Miller scored his second goal of the game 2:22 into overtime for the Vancouver Canucks to complete a stunning comeback and beat the New York Rangers 3-2 on Tuesday.

Trailing 2-0 heading into the third period, Vancouver rallied with a pair of goals and goaltender Thatcher Demko forced extra time with eye-popping saves in the final minutes.

Demko stopped 20-of-22 shots. Igor Shesterkin made 33 saves for the Rangers in a losing cause.

Miller and Vasily Podkolzin scored in regulation for the Canucks (4-5-1). Conor Garland contributed a pair of assists to the win.

The Rangers (6-2-2) got goals from Mika Zibanejad and Artemi Panarin, and a pair of helpers from Adam Fox.

Vancouver earned its first home win of the season and ended a three-game skid.

J.T. Miller followed up on his own rebound to score his second goal of the game and give the Vancouver Canucks a 3-2 win over the New York Rangers. 1:18

Oliver Ekman-Larsson’s hooking penalty gave the Rangers 36 seconds of five-on-three with less than four minutes to play in regulation.

The Canucks killed off the two-man advantage with heroics from netminder Demko to weather the second penalty.

Vancouver’s netminder lost both his stick and blocker but still managed to make several kick saves — with his bare right hand behind his back — to keep the score tied at 2-2.

At the other end of the ice, Shesterkin stymied the Canucks for two periods before conceding a goal 1:29 into the third.

Garland looked ready to shoot near the goal line but instead sliced a crisp pass to Miller, who tapped a shot in back door for his second goal of the season.

Minutes later, Garland dug the puck out from behind the Rangers net and flipped it to Podkolzin. The Russian rookie fired a rocket from the face off dot to even the score.

Vancouver’s offence began clicking late in the second period with Elias Pettersson and Miller streaking down the ice for a two-on-one chance. Pettersson ripped a shot from the bottom of the faceoff circle, only to see the puck hit the crossbar.

Moments later, Podkolzin muscled through New York’s defence and tried unsuccessfully to get a backhanded shot past Shesterkin.

The Rangers led 2-0 midway through the second period with their second power-play goal moments after killing off their fifth penalty.

After having his blocker knocked off, Thatcher Demko made a trio of great saves to keep Vancouver tied late in regulation. 1:05

Ryan Lindgren had just stepped out of the box when the Canucks were called for too many men and Panarian was quick to capitalize, unleashing a rocket from near the blue line that hit Vancouver defenceman Tucker Poolman and sailed in past Demko.

Zibanejad opened the scoring with a power-play marked 2:33 into the second after Canucks defenceman Tyler Myers was booked for interference.

Panarian threw a puck into the slot and Zibanejad redirected it up and over the sprawling Demko. It was the Swedish centre’s second goal of the season.

The Canucks’ special teams have struggled early this season. Vancouver went into Tuesday’s game tied with the New Jersey Devils for the fourth-worst penalty kill in the league (72 per cent) and the 20th power play (18.8 per cent).

The Canucks continue their seven-game homestand Friday when they host the Nashville Predators. The Rangers visit the Oilers in Edmonton the same night.

Host Morgan Campbell is joined by ‘Bring It In’ panellists Meghan McPeak and Dave Zirin, to discuss their reactions to the Chicago sexual abuse scandal, Kyle Beach coming forward publicly, the aftermath of the scandal that has seen the resignations of Joel Quenneville and Stan Bowman, and the unanswered questions about how the NHL and NHLPA plan to move forward with handling abuse allegations. 11:34