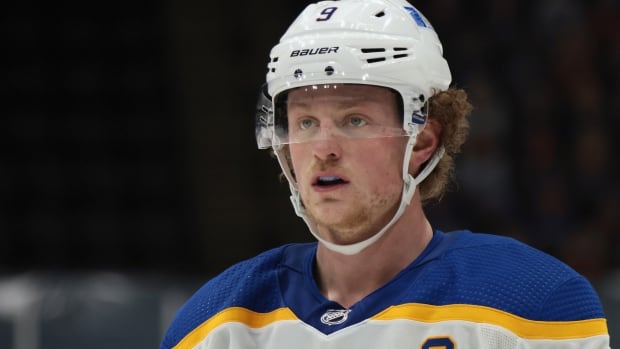 This is an excerpt from The Buzzer, which is CBC Sports’ daily email newsletter. Stay up to speed on what’s happening in sports by subscribing here.

The NHL trade everyone was waiting for finally happened

After months of trade rumours, speculation and just general bad feelings, the Buffalo Sabres finally dealt away their injured and disgruntled former franchise player today. Jack Eichel, a 25-year-old centre, was sent to Vegas along with a third-round draft pick for 25-year-old winger Alex Tuch, 20-year-old rookie centre Peyton Krebs, a first-round pick and a second-rounder. Buffalo will not cover any of Eichel’s salary — a key element of the deal, considering he’s in the fourth year of an eight-year, $80-million US contract. The Sabres probably could have gotten more in return had they agreed to pay some of that.

This is about as big an in-season move as you’ll see in the NHL. Eichel hasn’t quite lived up to the hype he generated as the No. 2 overall pick (behind Connor McDavid, and two spots ahead of Mitch Marner) in the 2015 draft. But he’s still young and has shown flashes of superstardom despite playing for awful Buffalo teams since the day he entered the league. In his last full(ish) season, 2019-20, Eichel scored 36 goals in 68 games and averaged 1.15 points per game — the same rate as Sidney Crosby, and slightly better than Marner and Auston Matthews.

The wheels fell off last season, when Eichel managed just two goals in 21 games before injuring his neck when he was checked into the boards during a game in early March — right in the middle of Buffalo’s epic 18-game losing streak. Turned out, that was the last time Eichel would dress for the Sabres. He was diagnosed with a herniated disc, then got into a bitter squabble with the team over what type of surgery he should get to repair it, leading to Buffalo stripping him of his captaincy.

Eichel’s neck still needs fixing, but that could happen as soon as this week after Vegas gave its blessing to the surgery of his choice. It’s expected to take 3-5 months for Eichel to be ready to play again, meaning he probably won’t suit up for the United States at the Olympics in February but could join the Golden Knights lineup in time for the end of the regular season. Read more about the Eichel trade here and get a full breakdown in the video below featuring Golden Knights reporter Justin Emerson and CBC Sports hockey expert Rob Pizzo.

Now that the Eichel deal is (mercifully) done, let’s check in on some of the other interesting stuff happening on the ice so far this NHL season:

The Hurricanes are blowing everyone away.

At 9-0-0, Carolina leads the overall standings and is the only unbeaten team. Florida (8-0-1) is the only other club that hasn’t lost in regulation. The Hurricanes’ standouts include forwards Andrei Svechnikov (13 points) and Sebastian Aho (11), and new defenceman Tony DeAngelo (10). Carolina rolled the dice on DeAngelo after he was cut loose by the Rangers last season for his bad behaviour, culminating in a fight with a teammate. He’s also rubbed many hockey fans the wrong way on Twitter. But DeAngelo seems to be capitalizing on his fresh start. Hurricanes goalie Frederik Andersen is on fire as well, leading the league in wins (8) and goals-against average after being let go by the Leafs.

Hot on Carolina’s heels in the President’s Trophy race are the Pacific Division front-runners. Led by Connor McDavid and Leon Draisaitl (of course), the Oilers are off to an 8-1-0 start and top the league with 38 goals. Draisaitl is tied for the individual goals lead with nine, and last night he became the first player to reach 20 points in fewer than 10 games since Mario Lemieux in 2002-03. McDavid, who’s right behind Draisaitl with 19 points, is on a nine-game points streak to start the season. Edmonton also has the NHL’s No. 6 scorer in Ryan Nugent-Hopkins, who has a league-high 13 assists but no goals.

The Flames (reportedly the runners-up in the Eichel sweepstakes) are 6-1-2, led by a resurgent Johnny Gaudreau, Elias Lindholm and the surprising Andrew Mangiapane. The latter two are part of a group tied for second in the league with seven goals.

Winnipeg (5-2-2) is off to a nice start too and Toronto (5-4-1) has kept the wolves at bay by winning its last three games. Vancouver (4-5-1) and Ottawa (3-5-1) are struggling a bit, while Montreal’s Eastern Conference title defence is off to a nightmarish start. The Habs are a conference-worst 3-8-0, though they could get Carey Price back soon.

The 36-year-old sniper has nine goals in nine games, tying him with Draisaitl for the league lead. After potting only 24 last season and losing the goals title to Matthews, Ovechkin is back on track to win his 10th Rocket Richard Trophy — and eighth in 10 years.

He’s also moving up the all-time goals list at a break-neck pace. After passing Marcel Dionne for fifth place already this season, Ovechkin (739 goals) is now just two away from Brett Hull. Jaromir Jagr (766) is also in his cross-hairs, which could leave only Gordie Howe (801) and Wayne Gretzky (894) to catch after this season.

Who won the Jack Eichel trade?

Rob Pizzo and Justin Emerson from the Las Vegas Sun break down the trade that was a very long time in the making. 5:47

Andre De Grasse’s coach is facing allegations of sexual misconduct. Florida-based Rana Reider has coached the Olympic 200-metre champion for the past few seasons. He helped De Grasse win three medals in Tokyo this summer, and two at the 2019 world championships. Reider’s Tumbleweed Track Club also features American sprinter Trayvon Bromell and Britain’s Adam Gemili. The British publication The Guardian reported Reider is being investigated by the US Center for SafeSport “after multiple complaints of sexual misconduct were made against him.” The exact nature of the complaints is unclear. Athletics Canada said it “immediately referred the matter to our independent Commissioner’s Office to investigate.” British Athletics said it “informed U.K. athletes currently being coached by [Reider] to cease all association until the conclusion of this process.” Reider’s lawyer called the allegations “unvetted” and “unproven.” Read more about the case here.

Brad Aldrich’s name has been crossed off on the Stanley Cup. The Hockey Hall of Fame complied with Chicago’s request that Xs be engraved over the name of the disgraced former video coach accused of sexually assaulting player Kyle Beach during the team’s run to the 2010 championship. The Hall, which looks after the Cup, won’t completely remove a name from the trophy, but it has stamped one out before. Former Oilers owner Peter Pocklington got his dad’s name on the Cup in 1984 before the NHL asked for it to be X’ed out because he had nothing to do with the victory. Read more about Aldrich’s name being covered over here and see what that looks like here.

Coming up on CBC Sports

Figure Skating — Italian Grand Prix: The Grand Prix circuit typically does not include a stop in Italy, but the country stepped in after the Cup of China was cancelled due to pandemic-related travel/quarantine restrictions. The lone Canadian entry in Turin is the ice dance duo of Carolane Soucisse and Shane Firus. They finished seventh at the Grand Prix season opener, Skate America, a couple of weeks ago. The headliners are four-time ice dance world champions Gabriella Papadakis and Guillaume Cizeron of France, who return after taking last season off. CBC Sports is streaming every skate in all four disciplines, starting with the women’s short on Friday at 10 a.m. ET. See the full schedule and watch live here. Read a full preview of the Italian Grand Prix here.

You’re up to speed. Talk to you tomorrow.