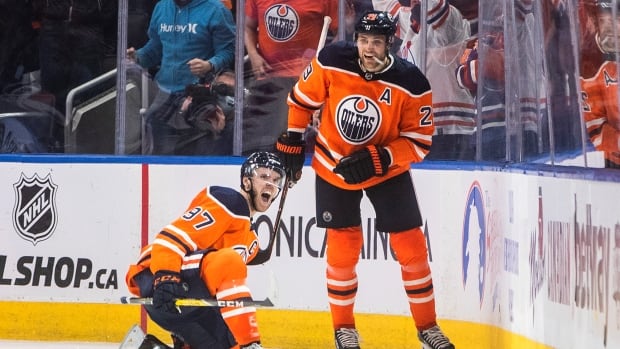 It felt like retro night in Edmonton on Friday when the Oilers and New York Rangers played a high-scoring, 1980s-style barnburner on the same evening an Oilers legend from their dynasty days of that era had his jersey retired.

The Edmonton Oilers set a franchise record when Leon Draisaitl scored the overtime winner in a 6-5 comeback win over the Rangers.

The Oilers have won nine of their first 10 games for the first time in team history. Draisaitl struck 3:27 into overtime after the Oilers roared back from an early deficit.

Hockey Hall of Fame defenceman Kevin Lowe, who won a combined six Stanley Cups with the Oilers and the Rangers, was celebrated in a pre-game ceremony.

“It felt like the `80s out there at times tonight,” McDavid admitted.

“We don’t want to get too far ahead of ourselves. It’s 10 games in. It’s a good start. It’s a special night with all the legends in the building. Honestly, we wanted to perform well, and we didn’t do that for a large part of the game. But finding a way to win a game like that? You can build on it.”

McDavid’s goal in particular turned heads. His highlight-reel goal at 17:01 of the third period tied the game 5-5.

Edmonton captain Connor McDavid gets past four Rangers then scores with a great move to tie the game at 5-5. 1:08

The captain waltzed through four Rangers defenders before undressing Rangers goaltender Alexandar Georgiev for his eighth of the season.

“The bench went crazy,” Hyman said. “At that time of the game, to score a goal like that, it was pretty special. Only he can make a play like that. It was just Connor being Connor.

I think it is the best goal I have ever seen.”

Edmonton goalie Mikko Koskinen stopped 20 of 25 shot in the victory.

Mika Zibanejad scored twice and Filip Chytil, Kevin Rooney and Chris Kreider also had goals for the Rangers (6-2-3) in their second straight loss.

“I’m disappointed no doubt, the way it happened, we played a great 35 minutes, then we sort of started watching them a little bit,” said Rangers head coach Gerard Gallant.

“We were a little too passive, when you give teams time and space they’re going to make their plays, especially with their talent. We played too much in their D-zone the last 25 minutes of the game and it caught up to us.”

Georgiev, who got the nod ahead of usual starter Igor Shesterkin, made 33 saves in the loss.

The hosts trailing 4-1 when Zibanejad scored at 6:56 of the second period, Puljujarvi kickstarted the comeback with a power-play goal at 14:41.

WATCH | Kevin Lowe’s number 4 jersey retired and hoisted to the rafters in Edmonton:

Former Oiler defenceman Kevin Lowe had his #4 jersey retired and hoisted to the rafters of Rogers Place in Edmonton Friday night. 2:10

That made Edmonton the first team to score a power-play goal in each of their first 10 games to start a season since Pittsburgh in 2007-08.

The Oilers’ lethal power play struck again one minute into the third when Barrie scored on a wrist shot.

Edmonton tied the game two-and-a-half minutes later as Puljujarvi scored his second on a big rebound in front.

New York regained the lead seven minutes into the third when Zibanejad picked the corner for his second of the contest, but McDavid knotted the game again to send it to overtime.

The Rangers started hot with a goal 1:53 into the game.

Some sloppy play by the Oilers allowed Chytil to rifle the puck past Koskinen, who had lost his stick.

Still less than a month into the 2021-22 NHL season, Rob Pizzo has already found plenty of unusual on-ice moments to discuss. 2:07

Despite being outplayed for much of the opening frame, the Oilers tied it up late in the first when Hyman took a couple swings at a rebound in tight and whacked home his seventh of the season past Georgiev.

New York led 2-1 after an Oiler giveaway allowed Rooney to send a shot over Koskinen’s shoulder. The Rangers surged ahead again 79 seconds later as Kreider scored his team-leading eighth goal of the season high to the stick side.

A Ryan Strome pass caromed off of Zibanejad’s skate and in for a power-play goal to make it 4-1.

The Rangers play their second game in as many nights in Alberta on Saturday when they face the Calgary Flames.

The Oilers, winners of four in a row, begin a five-game trip Tuesday in Detroit.