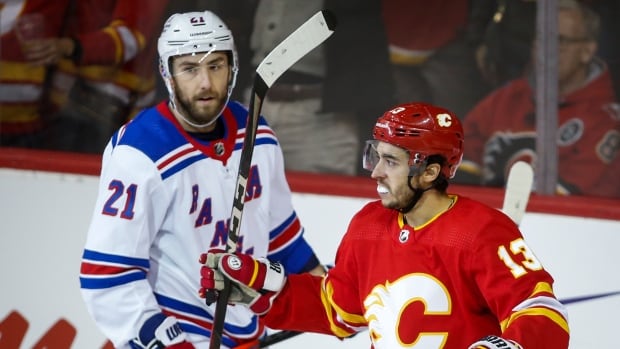 Between Matthew Tkachuk’s big night offensively and Jacob Markstrom’s stellar goaltending, the Calgary Flames were excellent at both ends of the ice Saturday night.

Fuelled by a raucous home crowd, Tkachuk had a goal and three assists and Markstrom made 22 stops for his NHL-leading fourth shutout as the Flames extended their point streak to 10 games with an emphatic 6-0 victory over the New York Rangers.

“The atmosphere was great,” said Tkachuk, who topped off his big night with a highlight-reel goal from between his legs. “We’ve had way too many overtime losses here at home and we really needed a win to get the Saddledome buzzing a little bit and get the fans involved.”

Calgary had lost three of its last four home games in extra time, but this game was put away early.

WATCH | Tkachuk finds back of net with between-the-legs effort:

Up 1-0 after the first period, Calgary surged in front 3-0 with goals just over two minutes apart from Brad Richardson and Johnny Gaudreau — with his first of two goals — midway through the second period, before blowing it open in the third.

After a disappointing season a year ago in which Tkachuk scored 16 goals in 56 games, he’s got six goals in 11 games this season. That includes goals in four straight games and a six-game point streak in which he’s notched five goals and nine points.

“He’s made a difference on this team,” said Flames coach Darryl Sutter. “Give him full marks tonight because his line struggled the last game and he took it on tonight and he carried the line.”

“It’s always fun to play home and I feel like personally, too, I haven’t played my best here and would have wanted a couple more wins at home. But we got a big one tonight and the rink was buzzing,” said Markstrom, who improved to 5-1-3.

Sean Monahan and Milan Lucic also scored for Calgary (7-1-3), which moved within one point of the Pacific Division-leading Edmonton Oilers.

The Flames are 2-0-2 on a homestand that concludes Tuesday against the San Jose Sharks.

New York (6-3-3), which had its seven-game point streak on the road come to an end, finished a four-game trip at 1-1-2. The Rangers host the Florida Panthers Monday.

WATCH | Reaves given penalty for hit to head of Calgary’s Mangiapane:

New York forward Ryan Reaves hits Calgary forward Andrew Mangiapane in the head. Reaves is given a minor penalty and Mangiapane stays in the game. 0:42

“Every game we’re going to go back and look at the mistakes and take the lesson and leave the mistakes, but right now this one stings a lot,” said Rangers forward Chris Kreider. “Tonight we didn’t trust the system.”

One of Markstrom’s biggest stops came early in the second to keep the score 1-0. Kreider, who entered the night tied for third in the NHL with eight goals, was set up in the slot by Barclay Goodrow, but couldn’t solve Markstrom on the wide open chance.

The Scotiabank Saddledome crowd of 15,879 was as loud as they’ve been all season and it started from the outset, loudly booing Adam Fox every time the Rangers defenceman touched the puck. It was in response to the Flames third-round pick in 2016 forcing a trade away from Calgary due to his unwillingness to sign with the team.

It looked briefly like Fox would get his revenge when he appeared to score the tying goal at 18:17 of the first, in which afterwards he brought his glove up to his ear as he faced the crowd during his celebration.

But the volume of the booing intensified as video review showed that Samuel Blais had preceded the puck into the zone on the Rangers rush, resulting in the goal being waved off. As the officials made the announcement, the video screen zoomed in on Fox on the bench, causing the fans to erupt.

It was the Rangers’ second loss to the Flames, who swept the season series. Calgary won 5-1 in New York earlier this year.