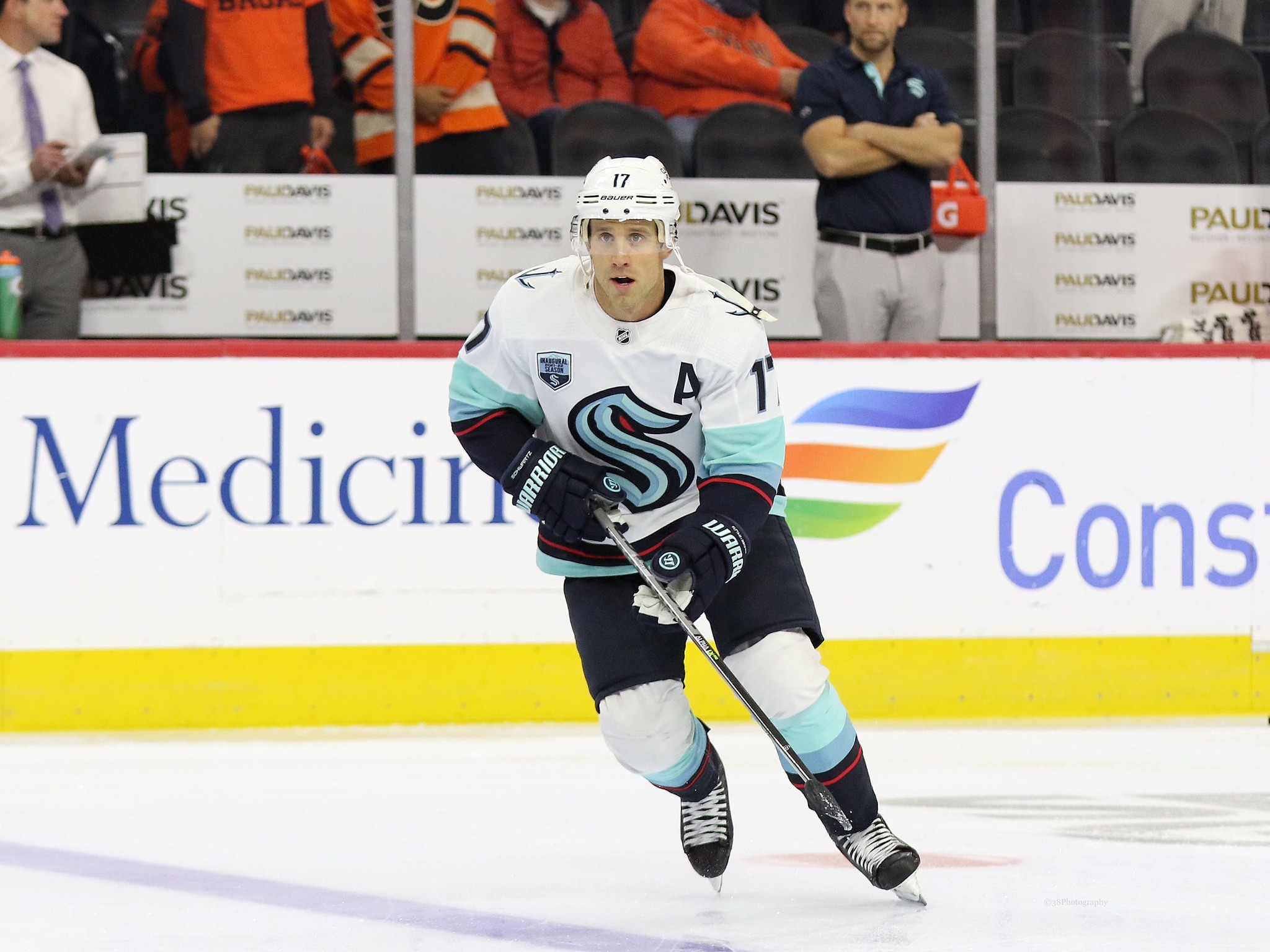 The Seattle Kraken have slowly been finding their game after a start that saw the team pick up only a single win during the first two weeks of the regular season. The team’s offensive core has been key to the team’s recent success, as they have scored three or more goals in each of their wins over the team’s past five games. Among the most notable of the Kraken’s forwards finding themselves on the scoresheet has been Jaden Schwartz, who has been rebounding nicely from a slow start to the season for the former Stanley Cup Champion.

Schwartz had his first multi-point game of the season on Thursday night against the Sabres and has put up points in each of the Kraken’s last five games, taking over the team lead in scoring. Couple that with a shot count tied for third amongst his fellow Kraken over those five games, and you find a player looking to recapture the offensive presence that has seen Schwartz score over 50 points in five of his last eight seasons.

The opening two weeks of the Seattle Kraken’s inaugural season was a significant challenge for the newest NHL franchise. The team dropped five of its first six contests of the season, and Schwartz, in particular, struggled to find his offensive production early in the season. After tallying an assist in the team’s first regular-season game against the Golden Knights, he would not record another point until scoring an assist in the Kraken’s first home win against the Montreal Canadiens.

Schwartz’s renewed production has seen him put up seven points through two goals and six assists over the last two weeks, propelling himself into the top spot amongst the Kraken’s point scorers.

Not only has Schwartz been productive on the scoresheet, but his offensive presence has been second to none on the team. His seven takeaways through the last five games leads all Kraken, and his total of nine takeaways this season sits only behind linemate Jordan Eberle in the category. His offensive production has been instrumental in helping the team to pick up three wins since Oct. 26, including their first back-to-back wins of the season.

Schwartz saw his consistent production in recent games pay off on Thursday night, as the team brought home a 5-2 win against a Sabres team reeling from the recent departure of Jack Eichel. Accompanying the first hat-trick in Kraken history scored by Eberle, Schwartz would put up three points during the contest. He would tally assists on two of Eberle’s three goals, with a battle in deep behind the net creating the opportunity for Eberle to tally his first goal of the night.

Later in the game, Schwartz would once again find his linemate on the rush, feeding a pass through Sabres defenders Rasmus Dahlin and Rasmus Asplund, setting Eberle up to complete the hat trick with a slap shot that found its way under the Sabres goaltender’s pads.

Schwartz would also find himself scoring one of Seattle’s five goals on the night, tallying an empty-net goal to close out the game with 18:46 into the third period. The three points scored against the Sabres marked his first multi-point game since April 22, where he scored two goals against the Colorado Avalanche while still playing for St. Louis.

Schwartz Firing on All Cylinders

Schwartz’s improved scoring over recent games with the Kraken has been buoyed by his increasing willingness to shoot the puck. Over the past five games since Seattle’s win in Montreal, he has amassed a total of 14 shots — that sits tied with Yanni Gourde for third on the team. His total shot count of 19 over the course of the season places him within the top 10 shooters on the team, and his shooting percentage of 10.5 percent is currently sixth among all Kraken. His proficiency with putting shots on goal has led to several prime scoring chances over the last set of games.

His first goal of the season against Edmonton and his assist on the first goal of Eberle’s hat trick demonstrate the hard-nosed work ethic Schwartz has been providing to give his team the competitive edge. He has been unafraid to grind into the dirty areas and battle with the opposing team for the puck, forcing attention to him and freeing up more space on the ice for his linemates. His play has forced giveaways from the opposing team and provided scoring chances for a team that has averaged nearly 3.5 goals over its past five contests.

Schwartz and the Kraken have a strong chance to continue their recent improvement during Saturday night’s matchup against the struggling Arizona Coyotes. The Coyotes currently sport the lowest goal differential in the NHL at an abysmal minus-31 and have allowed three or more goals in four of their last six games. Offensive production will be vital in shutting down the ailing Coyotes, and Schwartz’s rejuvenated offense should help Seattle to reach that end.

Michael Ingram is a long-time hockey fan and avid writer covering the Seattle Kraken. Born and raised in the rural North Country of New York, he has been writing a personal blog on everything from anime and games to hockey for five-plus years and has even dabbled in a bit of fiction.

Revisiting Minnesota Wild Drafts – 2001
Mason McTavish scores four goals in Canada’s rout of Slovakia. Maybe five would have been reason to celebrate.
The next one: Canada’s Bedard is another can’t-miss Connor
Ranking the Islanders Jerseys
An Early Look at the Blues’ 2023 Free Agents