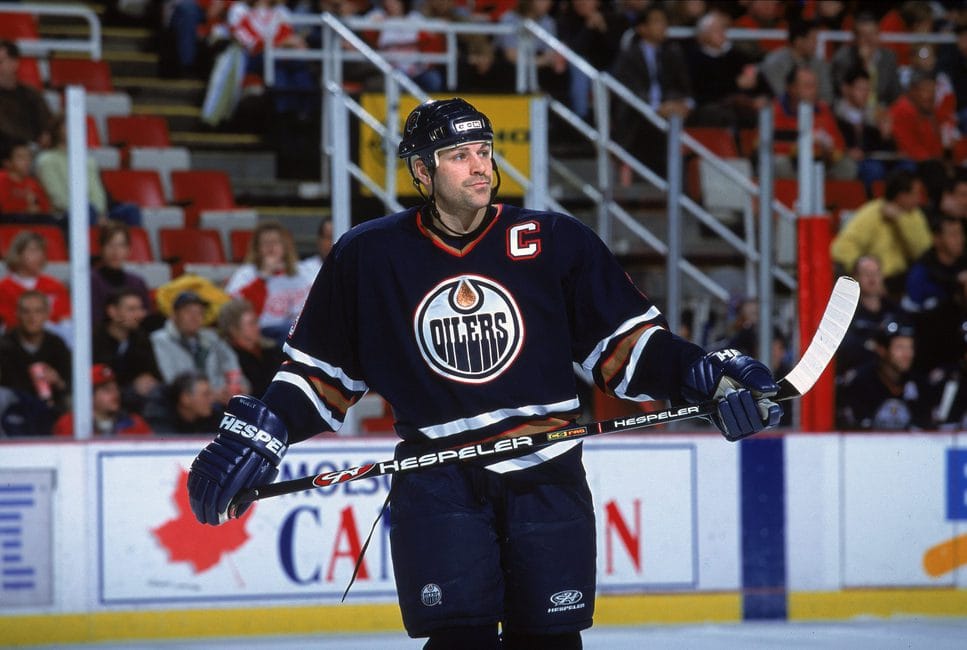 On Friday (Nov. 5), the Edmonton Oilers finally revealed their much-anticipated plans to create the Oilers Wall of Honour, which will acknowledge past players that have contributed greatly to the club during their time in Edmonton. The announcement was made by Oilers Entertainment Group (OEG) CEO and Chairman Bob Nicholson before Kevin Lowe’s No. 4 was raised to Rogers Arena rafters in a pre-game ceremony that night when the Oilers beat the New York Rangers 6-5 in overtime.

Lowe, who will be enshrined in the Hockey Hall of Fame (HHOF) on Nov. 15, joins Glenn Anderson, Paul Coffey, Grant Fuhr, Wayne Gretzky, Al Hamilton, Jari Kurri, and Mark Messier in having his number retired by the Oilers. With the organization stating they will only raise a banner for players that have been elected to the Hockey Hall of Fame, the Wall of Honour provides opportunity to recognize other franchise greats who will never bask in the rarefied air of hockey’s hallowed hall, but had outstanding careers in their own rights and were significant parts of Oilers history. Jason Gregor of TSN 1260 radio reported that the initial Wall of Honour inductions will take place later this season.

From the moment these plans were unveiled, fans began debating who the first honourees should be. Many shared their top picks on Twitter, and rarely were they identical. Here are six players — three forwards, two blueliners, and one goalie — that came up frequently and were some of the most buzzed about candidates for the Wall of Honour.

Unless the category is penalty minutes, you won’t find Dave Semenko’s name anywhere on the Oilers’ all-time leaderboards. He never won one of the team’s individual awards, never played in the NHL All-Star Game, but the late forward had a role on the team and a place in the community that transcended numbers, as was so evident in the outpouring after Semenko passed away from pancreatic cancer at age 59.

In his heyday, Semenko was arguably the toughest player in the NHL, and functioned as the loyal, unfailing “bodyguard” of Gretzky. If anyone even thought about laying a scratch on The Great One, they would have to answer to the 6-foot-3, 215-pound Semenko, who once fought Muhammed Ali in a charity boxing match.

Semenko’s time with the Oilers actually dates back to 1977, when Edmonton was still in the World Hockey Association. He was a member of the team for parts of its first eight NHL seasons, winning the Stanley Cup in 1984 and 1985. He played 454 NHL regular-season games for the Oilers, totaling 981 penalty minutes, sixth most in Oilers NHL history, and 136 points.

After retiring in 1988, Semenko was a fixture around the Oilers organization, working in roles including radio analyst, assistant coach, scout and team ambassador.

The one player who shows up on nearly everyone’s list is the universally beloved Ryan Smyth, who is, simply put, the face of the franchise for a generation of Oilers fans.

Smyth is all over the Oilers’ all-time, regular-season leaders lists, ranking second in games played (971), fifth in goals (296), fifth in game-winning goals (45), ninth in assists (335), sixth in points (631), and is tied with Anderson for first place with 126 power-play goals. He scored 20 or more goals eight times with the Oilers and led the team in goals in seven separate seasons.

Smyth’s trade to the New York Islanders at the trade deadline in 2007 broke the city’s heart, but he returned to Edmonton four years later to play the final three seasons of his career. He is a four-time Oilers Most Popular Player award winner (2003, 2004, 2006, 2014), two-time Oilers Molson Cup winner (2004, 2006) and received Oilers Community Service award in 2013. Smyth represented the Oilers at the 2007 NHL All-Star Game.

Doug Weight joined the Oilers as they were beginning their post-dynasty rebuild and became an irreproachable leader over eight-plus seasons with the club.

Weight helped the Oilers return to the playoffs in 1997 following a four-year absence of postseason hockey in Edmonton, and the team reached the playoffs in each of his final five seasons as an Oiler. The Michigan product was named the 10th captain in franchise history in 1999 and wore the “C” for two seasons until he was traded to the St. Louis Blues on July 1, 2001.

Considering that he always flew under the radar alongside his star teammates of the Oilers’ glory years, it was surprising to see Charlie Huddy’s name come up so frequently in the Wall of Honour conversation, though the steady blueliner is certainly most deserving.

In 1982-83, Huddy received the inaugural Emery Edge Award after leading the NHL with a plus/minus of plus-62, his first of three consecutive seasons registering a rating of plus-50 or higher. He was given the Oilers’ Defenceman of the Year award for 1982-83 and 1988-89 and won the team’s Unsung Hero award back-to-back in 1988 and 1989.

“The Doctor” will be one of the most hotly debated candidates for the Wall of Honour. He played in 453 games and totaled 188 points for the Oilers, which among the all-time leader ranks only 29th and 30th, respectively, and he never played more than 57 games in any of the last six of his eight seasons with the Oilers.

However, the one highlight that jumps off the page is his five Stanley Cup rings; Randy Gregg is one of only seven players to have been part of all of five of Edmonton’s championship-winning teams (1984, 1985, 1987, 1988, 1990). Of the others, five are in the HHOF (Anderson, Fuhr, Kurri, Lowe, Messier) and the sixth is Huddy.

Gregg could always be counted on every spring. He suited up 130 times in the playoffs, sixth all-time on the Oilers. Besides, part of the reason he didn’t play as many regular-season games or have as long of a hockey career as his peers is because he was a bit busy away from the rink: Gregg, who graduated from the University of Alberta’s school of medicine, is a highly-regarded physician, specializing in sports-related injuries, who has made a major impact in his field in Edmonton.

Edmonton’s all-time leader in regular-season games played by a goalie (449), Bill Ranford took over from Fuhr as the Oilers’ No. 1 netminder in 1989-90 and held that role for nearly seven seasons. Ranford backstopped the Oilers to the Stanley Cup in 1990, when he won the Conn Smythe Trophy as playoff MVP after earning a 16-6 record with a 2.53 goals-against average and .912 save percentage.

Ranford is the Oilers’ all-time leader in saves (11,502) and holds the franchise record for saves in a single season (2,089 in 1993-94). He ranks second all-time in franchise history in wins in both the regular season (167) and playoffs (25), behind Fuhr in both categories.

One thing that everyone will agree on while debating the merits of potential Wall of Honour members is that this process allows for appreciation of the number of special hockey players that have passed through Oil Country over the past four-plus decades. Whether they deserve a place on the Wall of Honour is highly subjective, and really dependent on how much value one places on various factors, such as team success, strength of character, individual stats and accolades, and longevity.

Who do you think should be on the Oilers Wall of Honour? Let us know in the comments below!

Brian is an Edmonton-based sports writer and broadcaster. His experience includes working as a sports reporter for the Edmonton Sun, where he covered the Edmonton Oil Kings 2013-14 Memorial Cup championship season.

NHL Rumors: Bruins, Rangers, Blackhawks, Stars
The next one: Canada’s Bedard is another can’t-miss Connor
Borje Salming was pioneering European star
Mason McTavish scores four goals in Canada’s rout of Slovakia. Maybe five would have been reason to celebrate.
3 Takeaways From Finland’s 4-3 Shootout Win vs. Czechia