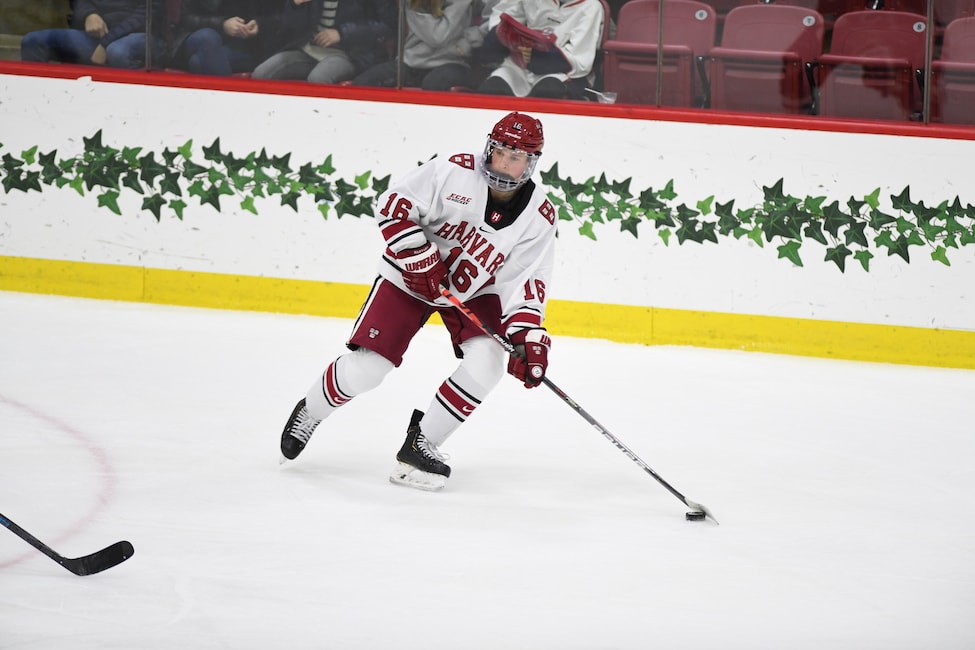 Welcome back to another edition of Toronto Maple Leafs Prospect Weekly, a series where I get you up to speed on Maple Leafs’ prospects, who are making headlines in the American Hockey League (AHL), Canadian Hockey League (CHL), NCAA, European Leagues, and everywhere in between.

In this instalment, I’m going to bring an update on a Finnish defenseman I covered last week, touch on a Toronto Marlies forward who’s making a strong case to be called up eventually, and shine some light on a trio of NCAA prospects who have been thriving lately.

Rindell Makes a Statement With His New Team

Last week, I talked about Maple Leafs 2020 seventh-round pick Axel Rindell switching teams in Finland. After a slow start below his standards with Jukurit that saw him record only five assists in 16 games, he was loaned to Oulun Karpat of the SM-Liiga to join fellow Maple Leafs’ prospect, Topi Niemela.

And so far, the move is paying off in dividends for Rindell. He scored his first goal of the season in his debut with Karpat and tallied four assists in his second game for the club for a nice, cool five points in two games. Niemela also stayed hot, adding a goal and an assist in Karpat’s 5-4 overtime win on Saturday to put him in the top-five in league scoring with 18 points in 20 games thus far.

The 6-foot tall right-handed defenseman posted 26 and 22-point seasons in 2020-21 and 2019-20, respectively, so it’s encouraging to see him get settled in with his new team quickly. Like Niemela, the 21-year-old will be looking to earn himself an entry-level contract, and I’d imagine Maple Leafs’ general manager Kyle Dubas would like to have him playing for the Toronto Marlies sooner rather than later to keep closer tabs on him.

When the Maple Leafs signed Alex Steeves to a three-year entry-level contract in March 2021, he was coming off an impressive junior year with the University of Notre Dame that saw him record 32 points in 29 games. But after a shoulder injury at the Maple Leafs’ development camp tournament in Traverse City forced him to miss all of training camp, he didn’t get a chance to showcase himself.

But he made his debut for the Marlies on Oct 30 and hasn’t looked back. He currently has five goals and six points in four games with the Marlies to start the season, including a pair of two-goal performances. After leaving a lasting impression with Maple Leafs’ senior director of player development Hayley Wickenheiser, Steeves is showing the club that he wants to be in the same call-up conversation as guys like Josh Ho-Sang and Kirill Semyonov.

And if Steeves keeps producing the way he is, there’s no doubt in my mind that the New Hampshire native will get the call at some point. He has some electric speed to go along with his early goal-scoring prowess that would fit into the Maple Leafs’ speed and skill-driven system. Plus, he’s already under contract and would be able to go back and forth without having to pass through waivers.

Maple Leafs’ NCAA Prospects Off to a Sizzling Start

While most of the Maple Leafs’ top prospects are playing overseas, they’ve had some impressive performances from their rookies south of the border lately. Nick Abruzzese, a fourth-round pick in 2019 and team captain for Harvard University, added two assists in Friday’s game against Cornell and a goal and an assist in Saturday’s game against Colgate. He now has eight points in four games after he missed the entirety of the 2020-21 season due to COVID and hip surgery.

Meanwhile, 2020 seventh-round pick Ryan Tverberg is off to a great start in his sophomore season with the University of Connecticut, scoring three goals and adding an assist in UConn’s two games this past weekend. The 6-foot tall Richmond Hill native now has seven goals and 13 points in nine games so far this season and is quietly becoming one of the Maple Leafs’ more intriguing prospects.

And at the University of Minnesota, Maple Leafs’ 2021 second-round pick Matthew Knies is having his own solid start to the season. The 6-foot-3 Phoenix native added a goal and an assist in Saturday’s 4-1 win over the University of Wisconsin, giving him seven points in ten games to start the season. Look for Knies to represent Team USA at the World Juniors this year as well.

To close off this week’s edition of Maple Leafs Prospects Weekly, 2020 fifth-round pick Ty Voit continued his impressive start to the OHL season with a goal and an assist as the Sarnia Sting beat the Erie Otters 4-1 on Sunday. Voit has now recorded a point in each game to kick off the 2021-22 OHL season, and it appears the Maple Leafs found good value in the Pittsburgh native.

Meanwhile, the ECHL’s Newfoundland Growlers played three games in a row in their first official “homestand” this weekend, winning two of three games in a mini-series against the Adirondack Thunder. A dispute with their normal arena in St. John’s has the Growlers playing out of Conception Bay to start the season, but regardless, it’s nice to see them back in action after they were left without a 2020-21 season due to the pandemic.

Alex Hobson is a third year broadcasting student at Niagara College. He has been writing about sports since 2005 and has been with The Hockey Writers since October of 2020. He covers the Toronto Maple Leafs, World Juniors, and the NHL Entry Draft, and is also part of the Sticks in the 6ix Podcast, presented by THW. He also makes weekly appearances on THW’s Maple Leafs Lounge Roundtable. For interview requests or any other inquiries, you can follow Alex’s social media pages listed at the bottom of his articles like this one.