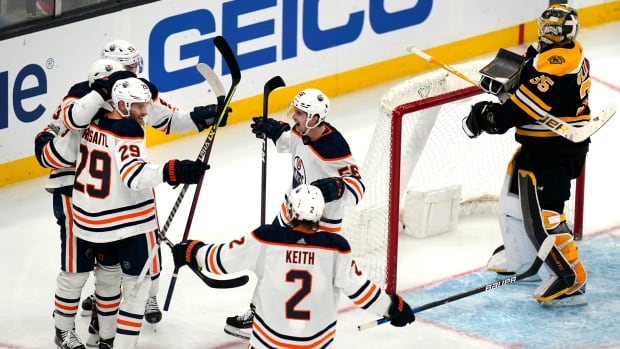 Leon Draisaitl had two goals and an assist, moving ahead of teammate Connor McDavid into the NHL scoring lead and leading the Edmonton Oilers to a 5-3 victory over the Boston Bruins on Thursday night.

“We competed way harder. We got behind quick but the ability to get it right back — not chase the game — we were pretty strong,” coach Dave Tippett said. “We don’t want to lose two in a row, so we came out and played well.”

McDavid had one assist to extend his scoring streak to 12 games to start the season. After entering the game tied for the NHL lead with 23 points, McDavid fell behind Draisaitl, who has a league-leading 12 goals to go with his 14 assists.

David Pastrnak and Brad Marchand each had a go-ahead goal for Boston that was answered less than a minute later by an Edmonton score. Brandon Carlo gave the Bruins their third lead late in the second period and then in the third turned the puck over to Draisaitl right in front of the net to make it 3-all.

“It says a lot about our group that we don’t stop, and we stick with it, even if it’s not pretty,” Draisaitl said. “There are lots of things that we can improve on, that we don’t have to score five goals every game to win.”

The Oilers went ahead for the first time about three minutes later when Ceci powered toward the net before sliding it to Draisaitl in front to make it 4-3. Ceci made it 5-3 in the final minutes — his first goal of the season.

“It’s especially nice for him to get a goal, and make a huge play on the game-winner,” Draisaitl said. “He’s been amazing. Probably not the prettiest guy to watch, if that’s what you want to say. But he’s so effective and so good at what he does.”

Oilers comeback led by late pair from Draisaitl in Boston

Edmonton’s Leon Draisaitl scored both his 11th and 12th goal of the season in the final frame of their 5-3 victory over the Bruins. 1:03

Linus Ullmark stopped 23 shots for Boston, which lost at home for the first time this season.

Pastrnak broke in on a two on one with Marchand in the first period, taking it himself to put the puck between Mikko Koskinen’s pads. Just 44 seconds later, Bouchard beat Ullmark on the glove side to tie it.

In the second, Pastrnak tried to pass it to Bergeron at the side of the net, but it was intercepted by Bouchard. The Oilers defenseman deflected it right to Marchand in the slot, though, and he made it 2-1.

But just 24 seconds later, the Oilers tied it again when Hyman skated in from the circle and, switched over to his backhand and beat Ullmark on the far side to make it 2-2.

Edmonton captain Connor McDavid gets past four Rangers then scores with a great move to tie the game at 5-5. 1:08

After Carlo made it 3-2 with about three minutes left in the second, the lead held up for about nine minutes until Carlo gifted Draisaitl a turnover right in front of the net to make it 3-all.

The teams had a pregame ceremony to honor Colby Cave, the former Bruin and Oiler who played 67 games in the NHL before he died in April 2020 at the age of 25 due to a brain bleed. The Bruins played a video in his memory, and his wife, Emily Cave, dropped the puck for a ceremonial opening faceoff.

The Boston Bruins Foundation was auctioning off game-used sticks from both teams to benefit the Colby Cave Memorial Fund.