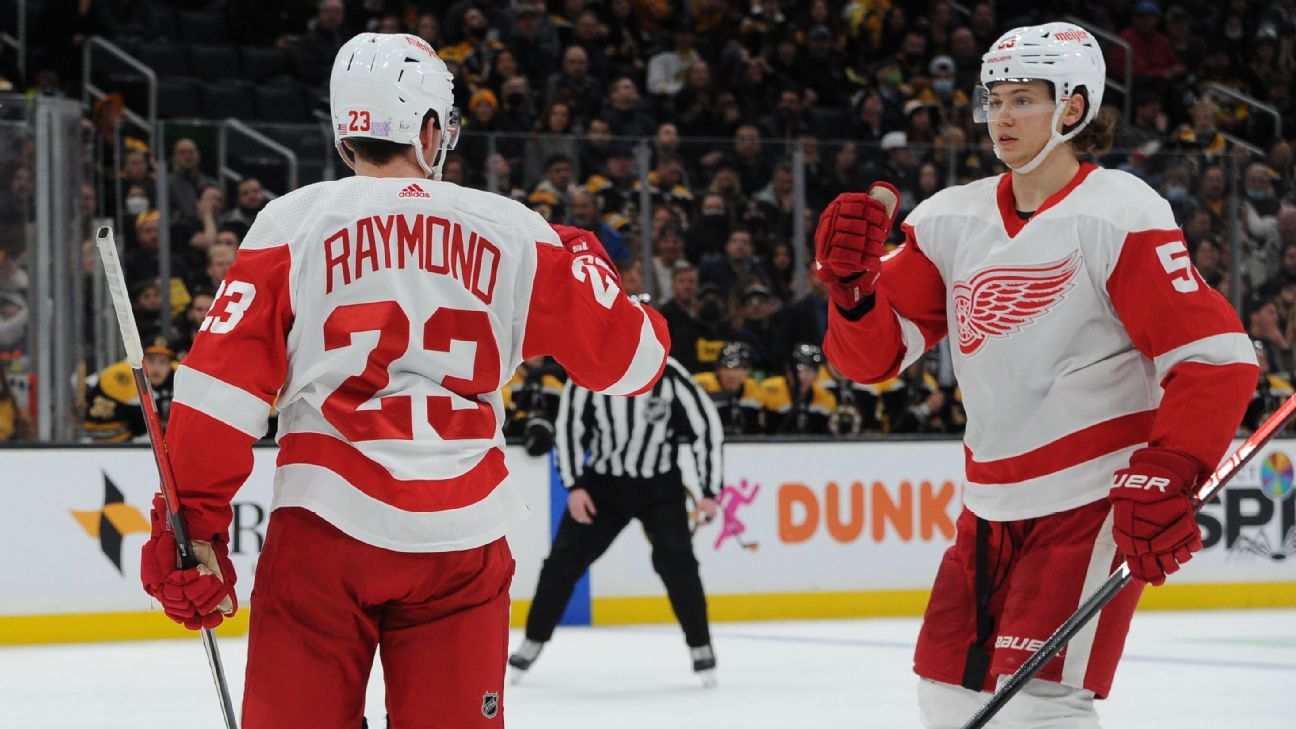 Early in the 2021-22 NHL season, rookies aren’t just building their respective cases for the Calder Trophy. Many of them are helping to change the trajectory of their teams — in most cases for the better, in some cases for the worse.

Here’s a look at which rookie forwards, defenseman and goaltenders have seen their stocks rise or fall after the first month of the season, based on established expectations. Plus, some context from team execs and coaches about what’s gone right and wrong.

In the “stock down,” we’re only dealing with players in and around the NHL and not ones that have already been shipped out to other leagues like William Eklund of the San Jose Sharks (Sweden), Hendrix Lapierre of the Washington Capitals (juniors) and Jake Neighbours of the St. Louis Blues (juniors).

But first, let’s find out which players are on the rise in the rookie of the year race.

The arrival of Seider and Raymond were like a shot of adrenaline to the heart of this moribund Original Six franchise. Through Wednesday night’s games, Raymond led all rookies with 14 points in 14 games, including six goals. The 19-year-old Swede played left wing with Dylan Larkin and Tyler Bertuzzi to form one of the league’s top trios — 61.6% expected goals at 5-on-5 and four power-play points. Raymond has become the betting favorite for the Calder at +275.

Shawn Horcoff, the Red Wings’ director of player development, said Raymond played his way onto the roster in rookie camp and the preseason. “It was just a question about if he was ready physically. And we didn’t have an answer. He was going to show us with his play,” he said. “You can see the kind of player he can turn into.”

Seider is leading all rookies in average ice time (22:25) and has 11 points in 14 games. The Red Wings have a 2.26 expected goals against per 60 minutes with Seider on the ice, best among any Detroit player.

“Mo has just had a nice, steady development curve since we drafted him. He’s put the work in during the offseason. It’s still early, but he’s playing in every situation for us,” Horcoff said.

What a story so far for the 24-year-old native of Oxbow, Saskatchewan. Jeannot signed with Nashville as an undrafted free agent in 2019, having played with the Moose Jaw Warriors for four seasons. He spent time in the AHL and ECHL before a 15-game cup of coffee with the Predators last season, when he tallied seven points. He has five goals and two assists in 13 games, and is now skating up with center Ryan Johansen.

The 18-year-old was the No. 12 overall pick in the 2021 draft and he’s really starting to find a groove with the Blue Jackets, with four points in his last two games. He’s skating with veteran Jakub Voracek, which will only help his offensive pace. As for his inexperience? “I’m not worried about my age at all. It doesn’t make me nervous that I’m the youngest guy in the NHL, currently,” he said, via the Blue Jackets. “I just try to go out there and understand I’m here for a reason.”

If the name sounds familiar, it’s because Dahlen was the prospect the Ottawa Senators shipped to the Vancouver Canucks way back in Feb. 2017 for Alex Burrows. The Sharks acquired him in 2019 for prospect Linus Karlsson. The son of former NHLer Ulf Dahlin, the 23-year-old center found his game playing professionally in Sweden for two seasons and has thrived with the Sharks, with eight points in 11 games. From “bust” to top line player with Logan Couture and Timo Meier is a pretty wild ride.

He was a finalist for the Calder Trophy last season, which is remarkable considering he didn’t reach the 25-game threshold for non-rookie status this season. Almost as remarkable as the Carolina Hurricanes deciding to trade the 25-year-old after that outstanding first season. The Red Wings welcomed him, and through eight games he has a 3-2-2 record with a .914 save percentage.

Drysdale, 19, played 24 games last season with the Ducks. He has six points in 14 games this season and has seen his ice time increase to 21:03 per game. His underlying numbers aren’t outstanding — like a minus-2.6 goals scored above average — but then he’s been absolutely tossed to the wolves by the team as a young defenseman. He’s playing better after some rough patches early on.

“We’re asking huge things of him. He’s playing against some of the best players in the league, night in and night out. I think that’s a little bit unfair for a guy to take on. But the but is that we want the guy to compete through that and work through it. We’ll do our best to protect him at times but he’s going to learn some lessons,” coach Dallas Eakins said.

His coach said there’s only been one big downside to Drysdale, who was drafted sixth overall in 2020.

“The only thing negative I can say about him is that he’s such a tough evaluator on himself. He’s got massively high standards. He hasn’t taken the approach that ‘hey, I’m 19 years old, I’ve got lots of time.’ He wants to be the difference-maker now,” Eakins said.

“The thing we’re trying to lighten the load on is how much he beats himself up after an honest mistake or a young mistake. Or, god forbid, the other team’s best player made a great play. Like, you have to be able to park it. Sometimes, it’s you who could have been better. And sometimes, Connor McDavid just makes an all-world play? If it’s the latter, just move on.”

Mercer, 20, picked up two assists in the Devils’ blowout win over Florida. He’s developed some chemistry with Andreas Johnsson, so his offensive output could be something worth monitoring.

The 20-year-old Finn has six points in nine games for the Panthers. He’s a dynamic playmaker — we’d like to see him ride with Sam Reinhart for a bit — but the most interesting thing about him this season is that he’s leading all rookies with 3:23 in short-handed ice time per game.

After five points in 10 regular-season games and another 12 points in 20 postseason games for Montreal, Caufield was the odds-on favorite to win the Calder this season. But after a lone assist in 10 games for the Canadiens, and seeing his ice time drop all the way to 11:06 in his final appearance in Oct. 31, Caufield was sent to the AHL to find his game. The Wisconsin product has two assists in three games with Laval. Unfortunately, his AHL stint is most famous for having served as Twitter troll fodder for the Utica Comets.

There’s a little recency bias here, as the 20-year-old Knight has given up 10 goals in two games against the Rangers and Devils on back-to-back nights. But overall, his rookie season hasn’t yet found a consistent groove, as he’s 4-2-1 with an .887 save percentage and a minus-5.1 goals saved above average in seven games. The real issue for his candidacy is the return of Sergei Bobrovsky to Vezina form: .948 save percentage and 8.8 goals saved above average in starting the season 6-0-0. Knight is going to have to work to steal starts from Officer Bobrovsky.

It could be argued that Knight’s presence made Bobrovsky a better goalie; could Bob’s play help spark Knight? “You know what? I don’t know how goalies think. I don’t pretend to know,” said Florida interim coach Andrew Brunette. “They both play great. Bob’s been outstanding. So has Spencer. To overthink it would be out of my league.”

Zegras remains second in the wagering odds for the Calder (+550) despite not having had the season that Lucas Raymond has. Is it fair to knock a 20-year-old rookie for only tallying five points in 12 games, simply because that performance doesn’t reach the preconceived heights expected of him? Probably not, and one torrid streak puts the dynamic forward right back in the conversation for top rookie. But right now, there are others speaking more loudly with their performances.

Make no mistake: Byram has been outstanding this season, with eight points in 10 games — all of them at even strength — and skating 21:04 on average, with his ice time continuing to climb. The Avalanche earn 57.6% of their shot attempts when he’s on the ice. All of this is great!

But we’d feel better about his Calder candidacy had coach Jared Bednar decided to keep him with the dynamic Cale Makar rather than slotting him down with Sam Girard, which appears to be the plan now that Devon Toews is healthy. Byram and Makar had a 62.4% expected goals against and allowed only 1.4 expected goals against per 60 minutes together. He also left Thursday’s game with a possible concussion. So a slight downgrade here for what’s otherwise been a Calder favorite.

Turns out “just show up behind the Boston Bruins team defense” isn’t such a simple recipe for a goalie. The 22-year-old goalie has been fine, with a .906 save percentage in going 3-2-0 so far. But it’s hard to square those numbers with Swayman’s 10-game audition last season, in which he went 7-3-0 with a .945 save percentage and a 1.50 goals-against average. He’s slightly above replacement level this season for the Bruins, but there’s plenty of time left. Or not, depending on what happens with free-agent Tuukka Rask.

Talk about your roller coaster. The 20-year-old Kings winger scored three goals in four games, including a key power-play tally in a win over the Devils. Los Angeles hit the road and kept winning, but he went scoreless against Toronto and Montreal and didn’t play more than 11:37 in either game. There’s plenty of time for an offensive breakout from a very talented scorer, however.

Please recall that despite being in his third season and being 26 years old, Bunting remains eligible for the Calder because of his games played and his age when camps started. “Old Man Rookie” has three goals and three assists in 14 games for the Leafs, but he has been riding a four-game scoreless streak and played less than 14 minutes in their win over the Flyers on Wednesday.

He’d have to have an outstanding offensive season to overcome the inherent bias against his “experience” among voters, and it hasn’t happened yet.

Another “wait, that guy’s a rookie?” player. Yes, technically, the third-year Wild goalie is eligible to win the Calder Trophy because he didn’t hit the games-played thresholds. But with an .882 save percentage in three appearances, he’s been a replacement-level player stuck behind starter Cam Talbot.