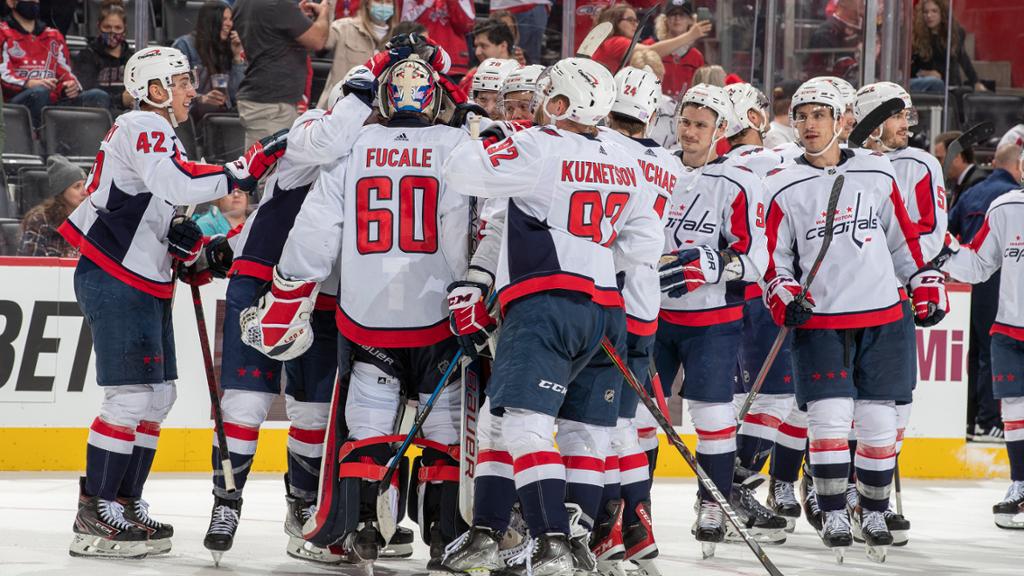 For the better part of his 26 years, Zach Fucale dreamed of making his NHL debut. When that night and that opportunity finally came on Thursday night in Detroit with his parents in attendance, Fucale was up to the task. He was strong out of the gates with eight saves in the first eight minutes while his team found its footing.

By night’s end, Fucale was the proud owner of a 2-0, 21-save shutout victory, the first ever by a Washington goaltender in his NHL debut .In the midst of his seventh season as a pro, he finally got his first opportunity and he made it count.

“I can’t dream it better, to be honest,” says Fucale. “This is a really great moment, and at the end of the day it’s a great win.”

Washington didn’t have its best start, spending much of the first half of the first dealing with Detroit in the defensive zone. But as the period wore on, the Caps began to spend more time at the opposite end of the ice, and they grabbed the game’s first goal on an offensive zone shift from the top line.

After Dmitry Orlov‘s left point shot clicked off Alex Ovechkin‘s stick and went wide of the Detroit net, Evgeny Kuznetsov retrieved it and put it back to Orlov at the left point. This time the defenseman cranked a one-timer past Thomas Greiss at 12:43 of the first. The goal manufactured by the Caps’ Russian troika staked them to a 1-0 lead.

Detroit won the center dot draw, but Caps defenseman – and ex-Red Wing – Nick Jensen made an assertive play at the center line, denying an intended pass from Marc Staal to Givani Smith and moving the puck ahead to Lars Eller. Eller carried into Detroit ice with the puck on his backhand, and as he approached the cage he quickly went to the forehand and wristed a shot past Greiss to make it 2-0 for the Caps at 12:53.

“I think that the [defenseman] kind of took the pass away, so I was trying to try to make a move lateral move at the end. We talked before the game about trying to get the legs going and look to be a little bit more opportunistic.

“I don’t know if that puck is going to come to me, but I’m going to make sure I’m coming in with speed so that if it does, I was there to get it.”

Fucale’s best stop of the period came when he denied Robby Fabbri’s rush chance in the waning seconds of the frame. Tom Wilson was given a holding penalty on the play, and the Caps opened the second period a man down.

Both teams got jammed up with penalties in the middle period. After Washington killed off the carryover call on Wilson, it had to snuff out another Detroit power play ahead of the first television timeout of the period. Then the penalty pendulum shifted Washington’s way, giving the Caps a lengthy 5-on-3 opportunity and a great chance to expand their lead.

With Moritz Seider already off for interference, Filip Hronek air-mailed a clearing attempt that went way over the glass just 11 seconds later. That gave the Caps a two-man advantage for 1:49, but Washington couldn’t take advantage. They iced the puck early on, and managed to get three shots on Greiss, but there was little movement in the offensive zone and lots of predictability.

A couple minutes after they failed to convert on the 5-on-3, the Caps had another power play opportunity that also went by the wayside, though Connor McMichael narrowly missed scoring just after the penalty expired.

Still in the offensive zone seconds later, McMichael was sent off for interference. When Carl Hagelin was boxed for tripping Tyler Bertuzzi, the Wings were looking at a 5-on-3 for 84 seconds. Detroit managed a lot of offensive-zone time with the two extra men, but the Caps protected the house and didn’t give the Wings any great looks. Orlov blocked a shot, and McMichael again narrowly missed making it a 3-0 game on a breakaway out of the box.

“Washington made it very difficult on us,” says Detroit captain Dylan Larkin. “We couldn’t get to the middle of the ice, we couldn’t generate a lot of offense, and our power play wasn’t nearly good enough.”

Fucale and the Caps carried that 2-0 advantage into the third period.

The Caps were ever diligent defensively in the final period, playing textbook road hockey. They clogged the middle, protected their own line with good sticks and sturdy bodies and got pucks deep whenever possible. A lengthy offensive-zone shift from the Kuznetsov line in the back half of the third whittled away a significant chunk of the time remaining at that point, and the Wings weren’t able to muster much thereafter.

Detroit’s final shot on Fucale came with 9:55 left in the third.

“The first eight minutes we were just a little slow out of the gate,” says Caps coach Peter Laviolette. “And he was good, he was sharp. And then even through the course of the rest of the game, there was a couple of big saves that he had to make in there.

“You know, if they get that first goal and make it 2-1, then maybe they get some momentum and the building gets life. And so he made some big saves, and after the eight-minute mark [of the first] I thought our guys played really well.”

This article was originally published by Nhl.com. Read the original article here.