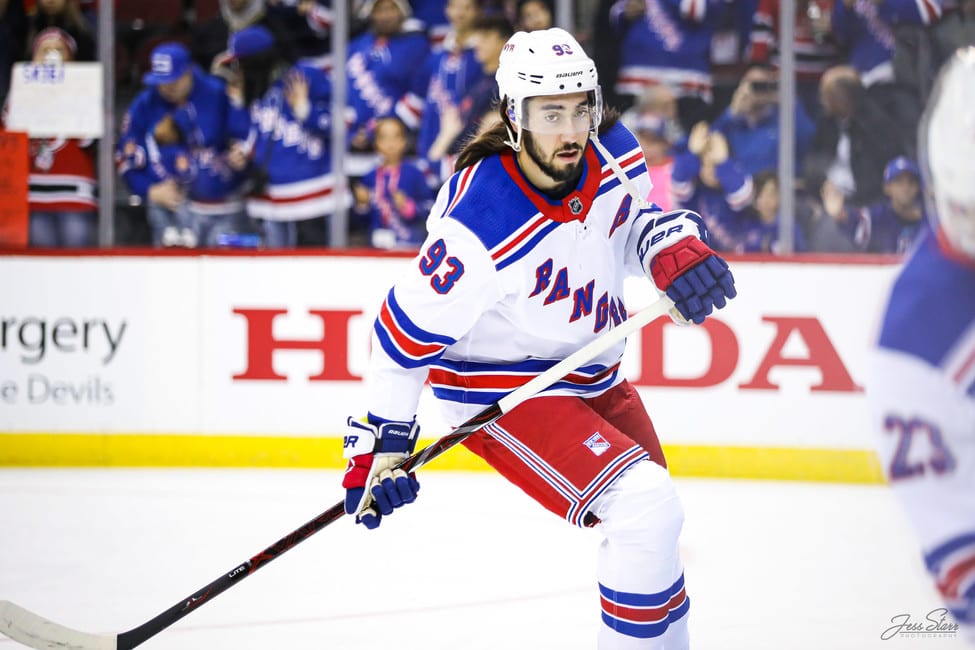 The New York Rangers currently have four players in the double digits with points at just 13 games in. Defenseman sensation and Norris Trophy recipient Adam Fox is tied for the lead with Artemi Panarin at 13 points. Veterans Mika Zibanejad and Chris Kreider are knotted at 12 points for second place on the team.

Despite being one of the youngest team in the league loaded with young talent, the veteran names are riddling the score sheet thus far (from ‘Sizing up the NHL: 2021-22 NHL teams by age, height, weight and nationality’, The Athletic, 11/4/2021). Of course, the team has yet to hit its stride. There are many aspects apart from the numbers where improvement is needed on a team and individual basis, especially with Panarin, Kreider, and Zibanejad all having yet to hit their peak form.

Zibanejad and Kreider landed in the top-six producers since Zibanejad joined the Rangers in 2017-18 season. With Panarin inserted in the top percentile since he joined in the 2019-20 season, the three have been in competition for the top previously. But since the organization recently and rapidly added a ton of young skill, the three are still standing apart. With over three-quarters of the season and plenty of time to go, the trio appear on pace again.

Related: Rangers Need Much More From Kakko and Lafreniere

The Rangers are set to face the Columbus Blue Jackets on the road tonight. Tomorrow, the team will face the New Jersey Devils back home. Two important divisional games will be an insightful indicator for the trajectory of the Rangers this season. It will also serve to help project the consistency of these three top performers as well.

With two goals and 11 assists, Panarin is casually experiencing a slower start to his season. A natural playmaker, it is to no surprise he currently has the most helpers on the team. Despite his sheer craftiness and skill when it comes to setting up goals, Panarin himself should take it to the net instead. The goals will come, of course, for Panarin, but he even posed the same thought.

“Maybe I need to be more [of a] shooter,” Panarin offered. The left winger’s pair of goals thus far marks his worst production rate since the 2017-18 season, to put things into perspective. Though he admits he is experiencing a tough start, his skill level, effort, and experience will lift him past the slow production, especially as the team clicks together.

The 30-year-old forward has yet to record a multi-goal game this season but already had three multi-point games. Panarin, who finds abundant success with linemate, Ryan Strome, should fall into a groove soon since the centerman rejoined the team after absence due to COVID protocol earlier this season. (from ‘Rangers’ Artemi Panarin in ‘good mood’ but not happy with slow start’, New York Post, 11/11/2021)

Panarin has one power-play goal on the season. Indeed, the performance overall on the power play this season is less than preferable. Yet he stands alone in fourth place overall in the league with eight points that he collected on the extra attacker advantage. The good news is, the team has time to find their footing, and as they do so, they are still staying afloat.

Lifelong Ranger Kreider leads with nine goals and has the fewest number of assists on this list with only three. He is enjoying rapid success this season — six of his goals occurred on the power play, and those are his six points total from the advantage. The Rangers are only one of seven teams that have two or more players leading the league for power-play points.

His individual success on the power play is integral to getting the special teams’ production to increase. Being a skilled power play and penalty-killing team is crucial in seeing this team make a postseason run — Kreider is a massive part of that.

The sturdy winger has four points alone in his last five games. He has a two-goal game and four multi-point games, including their last game against the prosperous Florida Panthers. Half of his multi-point games occurred on the road but one at home against their opponent tonight, Columbus.

Kreider’s hot performance is one that some may have not anticipated, especially so soon. Heavily regarded as a “streaky player” Kreider is now hard to not notice. The 30-year-old fills out nicely as one of the top leaders for the team and it is clear this is a role he revels in.

Kreider is also key in opening scoring for the team as well. Scoring first is an integral part of team success, especially helping set the tone and pace of the game. For years, the franchise envisioned a grittier look, but that had been a part of his game for a while. Kreider’s sharp reflexes and refined athletic ability allow him to be a pesky net-front pain for opposing goaltenders.

Though Zibanejad is still heating up, his four goals and eight assists land him amongst the top Rangers producers. The centerman sees wonderful chemistry with linemate Kreider, but Zibanejad has big shoes to fill thanks to his own previous statistics.

At the conclusion of the 2019-20 season, he led the team in goals with 41 in 57 games played. He ended second for points with 75, behind Panarin at 95. Zibanejad had a rough start to his season last year. After a case of COVID-19, it was clear he did not perform anywhere near his potential. Though he did not come out of the gate as hot this season either, he looks more himself.

A fellow leader on the team, the 28-year-old tallied one power-play goal. He also has four multi-point games under his belt already, only one at home. His season’s two-goal game came from the overtime loss to the Edmonton Oilers. The Swede is a crucial piece in attempts to rev up the Rangers’ 5-on-5 scoring.

Their even-strength scoring simply needs to be better if the team wants sustainable success. Though there is no legitimate reason to worry about these scorers or real urgency, Panarin, Kreider, and Zibanejad will have to keep up their pace and be wary of disappearing.

It is clear the young team relies on these three skaters in many ways. They should also be looked to in order to turn weak areas for the team around. While the team will benefit from the talent of the young players as they develop, the importance of these three players right now should not be overlooked.

Rachel is a recent graduate from the University of Pittsburgh earning a degree in Communications and English. After moving to Pittsburgh for school, she fell in love with the vibrant hockey community but that only strengthened her love for the team she grew up rooting for — the New York Rangers. Rachel covers the Rangers at thehockeywriters.com and she can be followed on Twitter @RachelNHL.