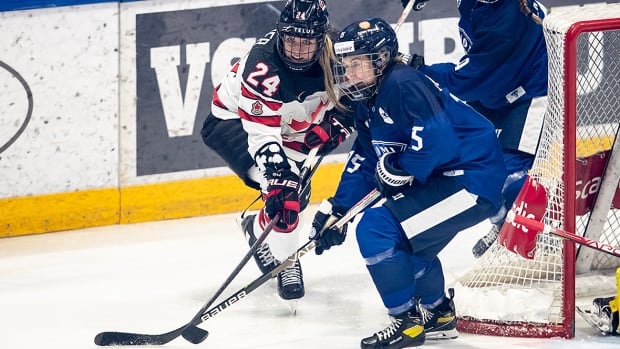 Sarah Fillier and Ella Shelton added a goal and an assist each in Turku, while Ann-Renee Desbiens stopped 21 shots. Erin Ambrose chipped in with two assists.

Canada also topped the Finns 4-2 in Helsinki on Thursday before Saturday’s 8-0 whitewash in the first of two at Turku’s Gatorade Center.

The Canadians led 3-0 after Sunday’s first period on goals from Fillier, Shelton and Bach before Susanna Tapani replied in the second for Finland on a power play.

We got into a little bit of penalty trouble in the second [period]. … We tightened things up and then found a way to finish on a strong note.— Canadian forward Brianne Jenner on Sunday’s 5-1 win over Finland

But Bach made it 4-1 with under eight minutes left in the third, and Jenner put things out of reach just over a minute later.

Canada finished 1-for-3 with the man advantage, while Finland scored its only goal on one of its eight opportunities.

Milton, Ontario’s Victoria Bach scored two goals for Canada in their 5-1 victory over Finland on Sunday. 1:35

“We started strong, but got into a little bit of penalty trouble in the second trying to cheat a little bit,” Jenner, a native of Oakvillle, Ont., said in a Hockey Canada news release. “We tightened things up and then found a way to finish on a strong note.”

The series in Finland was part of Canada’s preparation for February’s Beijing Olympics. It was also the national program’s first action outside North America since the 2019 world championship in Espoo, Finland.

“We executed a lot of things we have been talking about,” Canadian assistant coach Alison Domenico said. “It was a great way to finish up the road trip.”

Canada has centralized 29 women in Calgary since July. The country’s 23-player Olympic roster is expected to be announced in late December.

Next up for the Canadians are games against the United States next Sunday in Kingston, Ont., followed by a rematch Nov. 23 in Ottawa.

“We’re really looking forward to it.”