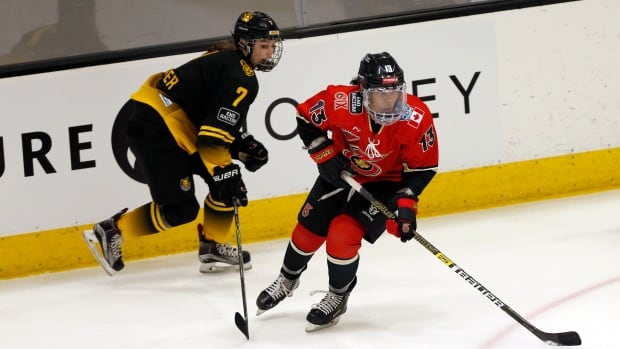 Thanks to the Premier Hockey Federation’s (PHF) doubled salary cap, the league’s MVP was finally able to afford her dream car: a Jeep Wrangler.

“Even though we’re not even making millions or anything, like we’re making the bare minimum to play hockey, I was still able to get what I want because of that doubled salary cap. If we had the same amount as last year, I definitely wouldn’t be able to do the things that I wanted to do.”

The increase in player pay for the 2021-22 season amounts to a jump in average salary to $15,000 US. Grant-Mentis’ salary is not publicly known.

Grant-Mentis joined the PHF — which rebranded from the National Women’s Hockey League ahead of the 2021-22 campaign — last year for the two-week bubble Isobel Cup tournament, which was interrupted due to a COVID-19 breakout and wound up spanning two months.

Still, the 23-year-old from Brampton, Ont., led the league in regular-season scoring with nine points in six games, earning newcomer of the year honours in addition to MVP.

Her second season looks mightily different than her first: a full regular season played in different cities; national broadcasts on ESPN+ in the U.S. and TSN in Canada; permanent dressing rooms.

That last point might help Grant-Mentis save on potential car cleaning.

When she’s not taking her Jeep to the rink, Grant-Mentis works a second job as a FedEx driver.

It’s part and parcel of playing professional women’s hockey in 2021, when the sport is — quite literally — all over the place. There’s the six-team PHF, which includes five American outposts in addition to Toronto. Then there’s the Professional Women’s Hockey Players’ Association (PWHPA), which recently hosted a tournament in Nova Scotia and would normally include North America’s top players, except they’re centralized with their respective national teams (Canada recently completed a three-game set in Finland) ahead of the Beijing Olympics in February.

Jennifer Botterill: The push for women in sports broadcasting and a pro women’s hockey league

Former Canadian hockey player and Hockey Night in Canada analyst Jennifer Botterill talks to Ian Hanomansing about the increasing number of women in sports broadcasting and why she’s fighting for a professional women’s hockey league. 5:45

In an Olympic year, the disarray is only amplified as the game attempts to capitalize on its upcoming attention boom.

The solution seems obvious. The PHF has the infrastructure; the PWHPA has the talent. Each side has corporate investment — the PWHPA recently launched a temporary monument sponsored by Budweiser across from Toronto’s Hockey Hall of Fame to shed light on the women’s game.

The PHF is in its seventh season. The PWHPA was formed in the aftermath of the Canadian Women’s Hockey League’s collapse in 2019.

It’s curious why the sides have yet to come together — especially when the NHL has said it would only support a united women’s league.

“We all want the same thing. We want a professional women’s hockey league at the end of the day. And there’s a lot of moving parts to get to where we all want to be,” said PHF senior vice-president of hockey operations Lisa Haley.

Hefford named three things the PWHPA is fighting for: health benefits (especially for players in the U.S.), a living wage (“a respectable number that allows them to be hockey players”) and professional hockey infrastructure.

PWHPA players currently don’t receive regular salaries, but can win their share of a $1 million US pot with team success on the Dream Gap Tour.

“If there was an opportunity for the players to play in an environment that provided all the things I named off to you, they would be a part of that, right? But that currently doesn’t exist. So those are things that we just don’t think the players should have to compromise on,” Hefford said.

On health benefits, Haley said PHF players have medical costs covered when injuries occur while playing, but full U.S. coverage has not yet been implemented.

As for infrastructure, Grant-Mentis said there was nothing more she could ask of the league, and that even in the bubble season details were taken care of so the players could focus solely on hockey.

Sarah Potomak scored the lone shootout goal to propel Team Scotiabank to a 2-1 win over Team Harvey’s in the final of the PWHPA Tim Hortons Showcase. 0:41

Haley said she believes the PHF is “extremely close” to meeting the PWHPA’s standards.

“I think there’s a lot of attractive features here that are getting really difficult to ignore,” she said.

“I know the PWHPA brings a lot of positives to the table too. So hopefully there’s an opportunity to come together and make the strengths of both organizations work to everyone’s advantage.”

When the PWHPA was formed, it appeared to hold the leverage due to its star power. The NWHL at the time was seen as the inferior league by some.

But just over two years later, the pendulum may be swinging back to the PHF. The ESPN deal brings plenty of eyeballs with the league set to expand into Montreal next season.

Come February’s Olympics, however, the PWHPA players will once again take centre stage.

Both sides agree that the Olympic attention is positive, but maintaining the momentum is a challenge.

“And that’s a mission that we’re working towards every single day is to try to get to a point where there’s a professional league that supports the women in a professional way and allows people to see them on a weekly, if not daily, basis,” Hefford said.

“Obviously, we need the financial support, but we also just need people to see how great the game actually is, and you have to be seen to be heard,” Haley added.

Grant-Mentis will finally be seen live in Toronto when the club enjoys its long-anticipated home opener on Saturday following its debut season in the Lake Placid, N.Y., bubble.

“My whole family is going, and half of them literally don’t even know what hockey is or what’s going on half the time. They’re all just coming to show support and stuff,” she said.

In February, Grant-Mentis will join her family as spectators as they watch Canada compete for gold over 14 days in Beijing.

“After those two weeks people are gonna be like, ‘Oh, I need more women’s hockey,’ and hopefully they go towards our league and they’re like, ‘Oh there’s another league around,’ and they can watch throughout the year instead of having just two weeks every four years.”